Now that the Super Bowl is over, there’s the usual selective outrage arguing that ‘this or that ad is racist.’ Last year, it was the Tibetans and GroupOn; this year, it is the Chinese and Pete Hoekstra’s bid for the U.S. Senate.The Democrats sense their opportunity to get the very unpopular Debbie Stabenow re-elected and turn Hoekstra’s ad into a Macaca moment.

Predictably the media is already in overdrive. “Ad Draws Protests for Portrayal of Asians,” was the headline for The New York Timesarticle. Lawrence O’Donnell has even attacked the Asian-American girl who dared to appear in the ad, going so far as to compare her decision to play the part of a Chinese villager to a decision a friend of his made not to play Hitler’s daughter. Naturally, the squishy GOP consultants are upset, too, according to Politico. Talking Points Memo went into convulsions when discovering that the Asian girl wearing the yellow shirt was called “yellowgirl” in the html code on Hoekstra’s website.

But Hoekstra is defending himself.

Only to have Rep. Judy Chu of California call the ad “violent and hateful” and blame Bush for the economic downturn on CNN.

They apparently haven’t met my Asian friends who found the ad, well, funny in its satire. I know this because I showed it to a bunch of young Chinese-Americans in the bobba shop where I work and asked them what they thought. “Sure, it’s offensive, but not worth getting upset over,” said one.  “Who is Debbie Spend-it-now? Is that really her name?” asked another and these are the supposedly upset Asian-Americans in her very congressional district.

As someone studying Chinese, who lives in a majority Chinese neighborhood and who is in love with an American woman of Chinese-Indonesian ancestry, I personally think that the ad is in poor taste. But racist? I’m not even sure I know what racist means anymore given how quickly the term is bandied about at this slight or that. Like the word “fascist” in George Orwell’s Politics and the English Language, it means whatever its user wants it to mean and no more.

To be sure the Super Bowl ad released by Hoekstra is probably offensive to some and unproductive to those of us who are trying to make the case that Asian-Americans are natural Republicans (and in Chinese no less), but it is disturbing how quickly Congresswoman Judy Chu, Congress’s lone Chinese-American rep, compares the ad to the brutal murder of Vincent Chin nearly thirty years ago by UAW workers.

She released a statement today all but blaming Hoekstra for the murder of someone by union thugs.

“Thirty years ago, a Chinese-American man named Vincent Chin was brutally murdered on the streets of Detroit by angry workers who blamed Japan for the plight of the U.S. auto industry,” said Chu. “Three decades later, Pete Hoekstra is stoking the flames of these same anti-Asian sentiments as he runs for the U.S. Senate in the very same state.

“I am appalled at the Hoekstra campaign’s offensive and insensitive Super Bowl ad that relies heavily on negative Asian stereotypes. Politics of fear and division will never bring the American people together around the solutions they so desperately need, and I am calling on former Rep. Hoekstra to take down this atrocious ad and issue an apology immediately.”

Such comments no doubt minimize the murder of Vincent Chin with Chu’s frequent invocation of him. In June 2011, she condemnedNevada congressional candidate Mark Amodei for “using China as a scapegoat for the recession” in a campaign ad criticizing Obama’s tax-and-spend policies. Chu called the ad part of a rising tide of “anti-Asian” sentiment. The ad attacked those who would make America dependent on the Chinese dictatorship, not ethnically Chinese people, but Chu shamelessly tried to tie Amodei to the ugly racism that led to the murder of Vincent Chin, a Chinese-American beaten to death by Chrysler employees.

Of course it should tell you everything you need to know about Chu that she has to go back thirty years to find an instance of anti-Asian American prejudice and that she leaves out that the people who committed that crime (and were acquitted) were  her beloved union workers, who continue to bankroll her campaigns.

Naturally, she is also nowhere to be found when Vice President Joe Biden has repeatedly used a mocking Indian accent:

And, as I have written for The Wall Street Journal, she is conspicuously absent from the largest civil rights struggle facing Asian-Americans today: the anti-Asian discrimination she supports.

The discrimination is so bad that even Obama’s liberal Department of Education is investigating it at Princeton and Harvard,according to Bloomberg News, but Judy Chu is totally silent and therefore complicit in that institutional racism.

It’s sad, but not surprising, that Judy Chu, the self-appointed left-wing spokesmen for Asian-Americans, can only find racism when it suits her. But why do we bother listening? 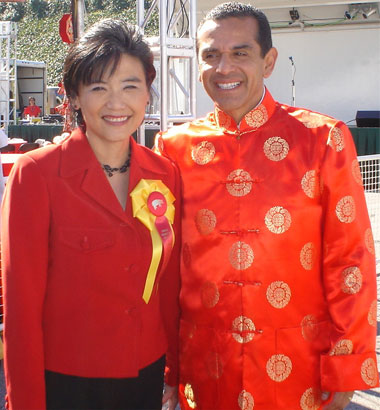 Where’s Judy Chu’s complaint when the mayor of LA wears a racist costume?