Half a dozen news outlets skipped posting snap polls after the second 2016 presidential debate on Sunday — most likely because Donald Trump touted his dominance of their polls after the first debate in September.

The first presidential debate was a tough one for Republican presidential candidate Trump, but he publicly declared victory by citing a slew of unscientific online polls where respondents said he beat his Democratic rival Hillary Clinton. The Daily Mail rounded up the results of many of these snap polls, as well, with a headline blaring “Trump won debate by a landslide.”

Such a great honor. Final debate polls are in – and the MOVEMENT wins!#AmericaFirst #MAGA #ImWithYouhttps://t.co/3KWOl2ibaW pic.twitter.com/sfCEE3I5pF

Establishment pundits reacted to the phenomenon with obvious jokes, as they have for a long time — as though they have some deep insight into the race by understanding that online polls are not scientific.

EVERYBODY THE ONLINE SNAP WHO WON THINGS DON'T COUNT.
If you don't care who is in the poll or how many times they vote it's not a poll.

Before clicking to see, I’m setting the over/under on percent saying Trump won in Drudge’s post-debate poll at 90.0. Make your choice.

I really wanna know what the Drudge poll says before I go too far out on a limb about who won.

Everyone knows online polls don’t reflect the electorate. But what they do reflect is the dedication and enthusiasm of a candidates’ online supporters. Both candidates’ fans have access to the same tools to game the polls — trolls, bots, etc. Pro-Clinton Super PAC Correct the Record has reportedly spent seven figures on online warfare. Yet Trump fans are still overwhelming the left in this facet of psy-ops, producing screenshot after screenshot of “polls” showing The Donald ahead.

Clinton backers know logically that this phenomenon does not necessarily affect the offline electorate, yet they still feel the need to debunk the meme — which wastes their time and energy while making them look bitter and defensive.

It makes sense, then, that most national conservative sites and local news sites did another round of online snap polls, but at least a half dozen left-leaning national outlets skipped them after the second debate.

Last time around, Time’s online snap poll went Trump 58 – Clinton 42. Instead of a “who won the debate” poll, the magazine bizarrely asked: “Which Presidential Candidate is Better for Your Money?” The current spread on that poll is Trump 89 – Clinton 11.

Last time: Trump 54 – Clinton 46. This time: Hillary won. She won so much! What does all this winning mean? 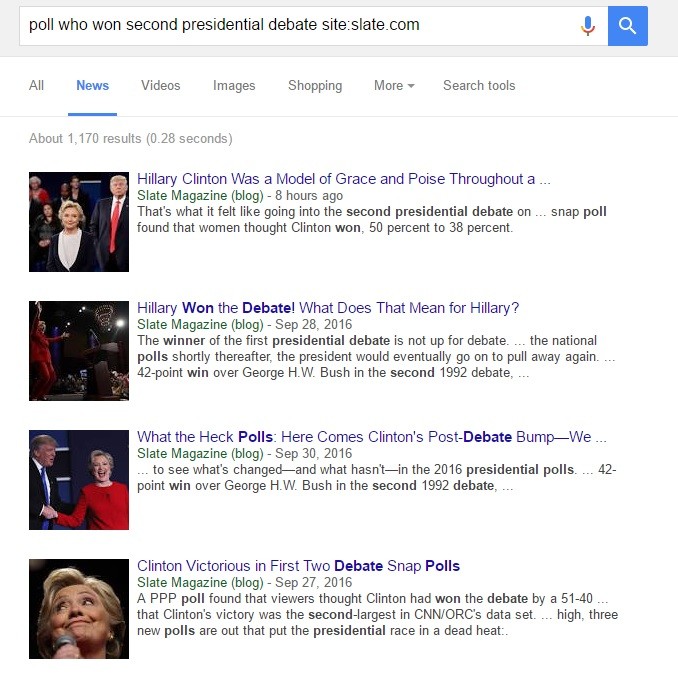 Fortune had the slimmest margin of most high-profile online polls after the first debate, Trump 51 – Clinton 49 after 400,000+ votes. This time around, the site’s editors silently skipped a shot at another 400,000 hits. 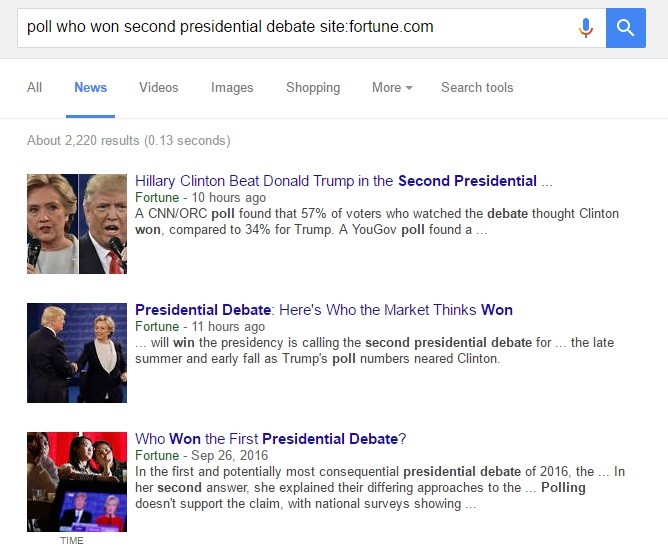 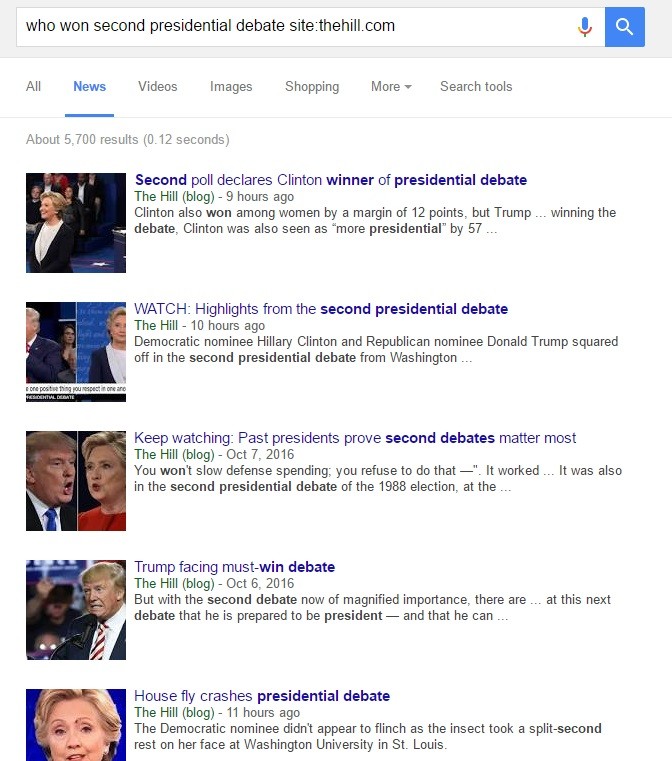 Last time around, CBS New York’s online poll went roughly Trump 58 – Clinton 42 with ~41,000 votes. Surely it is only a coincidence that the site did not conduct an online poll Sunday night. 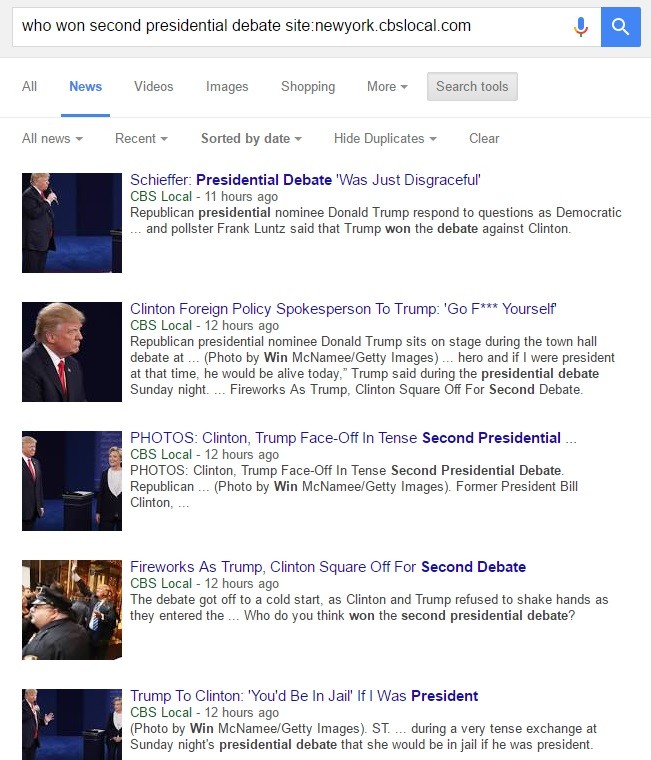 With half as many votes and the same tight margin as Fortune’s 51-49 split, CNBC must have found the result of their last online poll too demoralizing to risk a repeat. 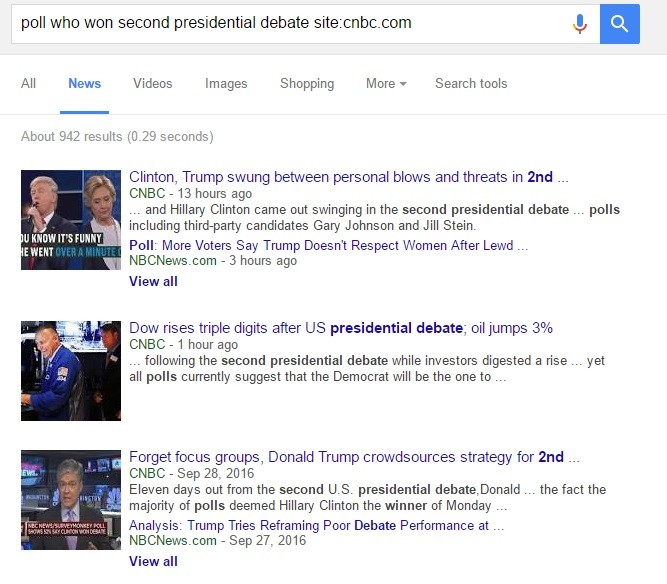 Most establishment news outlets are touting a “scientific” poll by CNN and ORC which says that 57 percent of debate watchers declared Clinton the victor on Sunday night. Left out of that top-line figure: 58 percent of their sample “said they were supporting Clinton before the debate [emphasis added].”