Before Facebook unveiled measures to monitor the spread of “fake news” on the platform, BuzzFeed editor Craig Silverman was working as an adjunct professor for the same media organization that created the fact-checking rules Facebook will use to flag and label fake news stories.

In December 2011, Silverman became an adjunct faculty member at the Poynter Institute. At Poynter, Silverman reported “on trends and issues regarding media accuracy and the discipline of verification.”

Poynter funds PolitiFact, which is one of the “third party organizations” Facebook will use to determine real from fake news.

Silverman, dubbed a “fake news expert” by Fortune, has spent years chronicling inaccurate news reporting. He published a book about how media misinformation can “pollute the press and imperial free speech.” In 2014 he launched Emergent, a website dedicated to tracking fake news in real-time.

By June 2016, with the presidential election in full swing, Silverman’s reporting had focused more on media.

On November 3, 2016, Silverman and co-author Lawrence Alexander published a piece on BuzzFeed identifying a multitude of pro-Trump “fake news” sites being run out of Macedonia.

Despite the Guardian having published a very similar story in August, Silverman’s BuzzFeed piece went mega-viral online. In a matter of days, the story was cited by the New York Times, the Washington Post, BBC, Slate, Vox, and many others and left some placing blame for the rise of fake news on Facebook.

“[H]ere we are, in the home stretch of a momentous election in which truthful reporting should be at a premium, and Facebook is overrun with viral dross that’s misleading voters, fueling partisan rage, and—according to an analysis of the data on hyperpartisan news sites by BuzzFeed in October—benefiting one candidate far more than the other,” wrote Slate senior technology writer Will Oremus.

“Who needs foreign interference when you have Facebook?” Oremus wondered.

Mere hours before Election Day, President Obama was rebuking the spread of fake news on Facebook.

“As long as it’s on Facebook…people start believing it,” Obama said, “It creates this dust cloud of nonsense.”

To be clear, the impact of fake news on the election had been a hot topic long before Buzzfeed’s Macedonia article.

But that story seemed to spur a spike in interest around fake news.

In the weeks after Silverman’s Macedonia piece was published, Google searches for “fake news” skyrocketed. 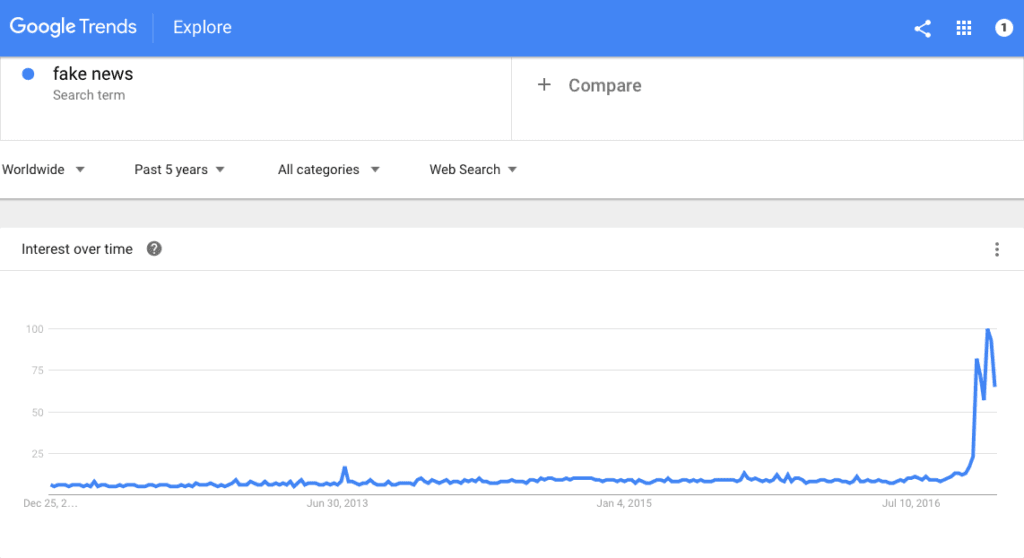 Now, a month after Hillary Clinton’s shocking election loss to Donald Trump, “fake news” and foreign influencers have become the blanket excuse for her devastating defeat.

Indeed, Silverman, Clinton, and others are portraying fake news a prevailing force of foreign-based propaganda. But some of the most viral fake news stories came from sites run by a California liberal named Jestin Coler, as reported by NPR.

Coler’s “Denver Guardian” page contributed one of the five most viral “fake news” stories of the election, according to Silverman’s own analysis.

“It’s now clear that so-called fake news can have real world consequences,” Clinton said last week. “It’s a danger that must be addressed, and addressed quickly. Bipartisan legislation is making its way through Congress to boost the government’s response to foreign propaganda, and Silicon Valley is starting to grapple with the challenge and threat of fake news.”

Indeed a burgeoning bugaboo for Facebook, fake news, however, has been a boon for Silverman: earlier this month he was named BuzzFeed’s first ever Media Editor.

“Fake news has been a really extraordinary story, and it turns out it’s the kind of story Craig has been kind of preparing for for some time—maybe his whole life,” Smith said of Silverman. “Craig has already shown that he can take a really global view of the fake news story, and bring some real analytical rigor to it.”

Silverman, for his part, says reporting fake news is his “destiny.”

And as fate has it, Poynter, Silverman’s old employer, is partnering with Facebook to select official fact checking news organizations that will decide what is and isn’t fake news on the platform.

There are currently six fact checking sites working with Facebook — some of them left-wing partisan groups. Snopes, for example, employs fact checkers who have far-left backgrounds, and Poynter-owned PolitiFact has repeatedly shown sympathy toward Democrats, attacked Republicans, and has been financed by left-wing billionaire George Soros.