Now, Rhodes is part of a new echo, repeating and retweeting left-wing smears aimed at one of his successors, Dr. Sebastian Gorka, Deputy Assistant to President Donald Trump and a key media spokesman for the White House.

Rhodes first took aim at Gorka in response to a tweet by Tommy Vietor, a former National Security Council spokesman under President Obama who infamously attempted to dismiss the Benghazi scandal by telling Fox News’ Bret Baier: “Dude, this was like two years ago.” Vietor was, in turn, quoting a Newsweek article criticizing Gorka for criticizing a critic for criticizing his credentials. Rhodes piled on, mocking the “Breitbart credentialed Gorka” for his sensitivity.

Rhodes and Vietor ought to be the last to question anyone’s credentials. Rhodes had no national security experience before being plucked from a struggling career as a fiction writer and promoted up the ladder. Vietor was literally the “dude” who drove the press van for Obama on the campaign trail. Both symbolize the callow nature and frat-house culture of the Obama West Wing. (Rhodes still claims today that Syria gave up “all” of its chemical weapons in 2013.)

Since that first swipe in February, Rhodes has joined the latest round of smears aimed at Gorka, tweeting an article from the Forward that attempted — and failed — to prove that Gorka supported an antisemitic Hungarian militia.

This person works in the WH: “Gorka…publicly supported a violent racist and anti-Semitic militia” https://t.co/bB6ljaUBGL via @jdforward

(Be warned before clicking on the link to the Forward article itself: readers are hit with a popup request for donations to continue funding the smear campaign against Gorka. They are literally fundraising off this character assassination.) 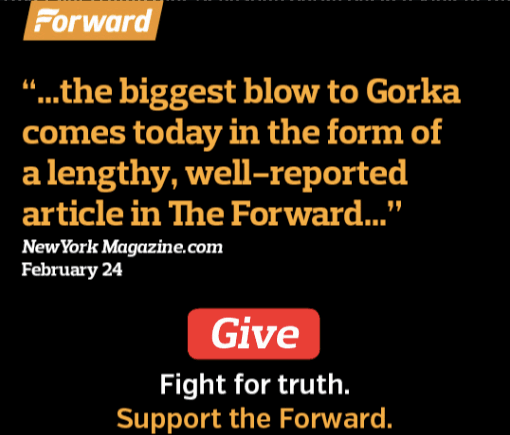 The poorly-written article included an old video interview in Hungarian with Gorka, with English subtitles — but the video was obviously spliced together. The raw video was also provided, but without subtitles.

David Reboi of RedState undertook a full translation. As David P. Goldman of PJ Media noted, “the Forward’s clip edits out Gorka’s denunciation of the anti-Semitic parties for exploiting popular fears in order to advance their own agenda” (original emphasis).

A lie good enough, as the joke goes, for government work — or post-government work, in Rhodes’s case. He tweeted later: “Picture if Gorka was a Muslim who supported an anti-Semitic militia and had associations with Nazi groups. Would he be in the White House?”

Here Rhodes did more than repeat the false accusations in the Forward: he also took aim at Gorka’s notable criticism of radical Islam, a threat Rhodes and his former boss refused even to pronounce.

The culmination of this new “echo chamber” came last weekend, with an NBC News piece that tried, and failed, to prove Gorka’s associations with Hungarian extremists but smeared him anyway, citing a fraudulent organization.

And so a smear that started with a discredited report on an anti-Israel blog has been promoted, via the Forward — which has an actual problem with antisemitism, having linked Zionists absurdly and outragously with Nazis  — into the front ranks of the mainstream media and finally to the big network news stage, but remains essentially empty.

It is the “echo chamber,” reborn — or, rather, undead, a sort of zombie, totally impervious to truth.

Note that none of Gorka’s detractors actually question his support for Israel, or even his links with Jews, because they do not care.

The echo chamber depends on a factual void, and repetition by false authorities. Just ask the man who invented it.

Joel B. Pollak is Senior Editor-at-Large at Breitbart News. He was named one of the “most influential” people in news media in 2016. His new book, How Trump Won: The Inside Story of a Revolution, is available from Regnery. Follow him on Twitter at @joelpollak.