CNN’s Chris Cuomo, co-host of the far-left network’s basement-rated morning show, is flat-out lying with a claim that “no one [is] calling for Second Amendment repeal.”

Now that a number of highly influential members of the left have indeed openly called for a repeal of our Second Amendment civil rights, now that this anti-gun toothpaste is out of the tube, on top of the left-wing Cuomo, a number of anti-gun activists are trying to clean up the mess. The reasons for this should be obvious.

Sadly for them, that particular cat escaped that bag forever Tuesday morning when no less than former Supreme Court Justice John Paul Stevens published an opinion piece in the a New York Times titled simply, “Repeal the Second Amendment.”

The truth, though, is that Stevens is merely joining a growing chorus on the mainstream left of those straight-up calling for a Second Amendment repeal, including Bret Stephens at the New York Times, Vanity Fair’s Kurt Eichenwald, and Rolling Stone magazine.

To sum up, not including countless signs calling for repeal at Saturday’s anti-gun March for Our Lives in Washington DC, we have a former Supreme Court Justice and three mainstream media openly calling for a Second Amendment repeal.

Stephens, however, is a much bigger deal, someone who cannot be dismissed as a trolling columnist engaging in click whoring. Rather, we are talking about a former justice on the highest court in the land.

And so, the anti-gun crowd is now desperate trying to put the Stevens’ cat back into the bag.

Anti-gun activist David Hogg, one of the most visible students from Parkland high school, has retweeted the assurance that his movement is not in favor of repealing the Second Amendment.

To clarify, #MarchForOurLives is not for the repeal of the Second Amendment. https://t.co/0ybz9JEB8y

Another high-profile Parkland anti-gun activist, Cameron Kasky, tweeted Tuesday that the repeal of the Second Amendment is “Not what we’re going for here, but [Justice Stevens’ column is] very interesting considering who wrote it.” Kasky added, ” Feel free to give it a read. I don’t feel the same way, but it’s an interesting point of view.”

https://t.co/JcFNFTA6VD Not what we’re going for here, but very interesting considering who wrote it. Feel free to give it a read. I don’t feel the same way, but it’s an interesting point of view.

No one, though, is being more desperately clumsy and dishonest in his attempt to gaslight us than Cuomo, who has decided that the best way to wish away this inconvenient truth is by flat-out lying.

Despite all documented evidence to the contrary, Cuomo tweeted the following lie out Wednesday morning: “[N]o one calling for 2A repeal. stop with the bogeymen. we need to stop the shootings and have a rational conversation about what can be done.” 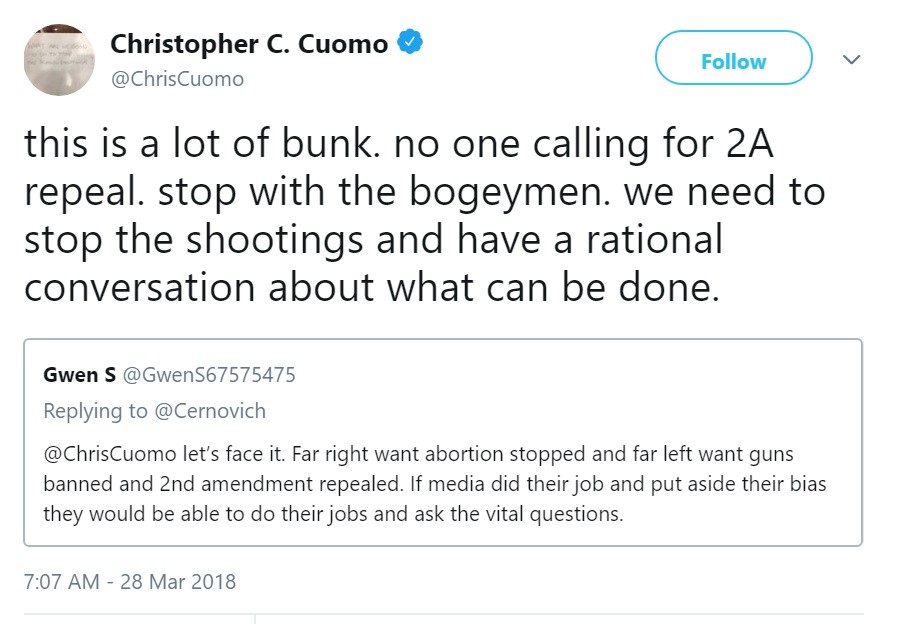 This is not the first time the Cuomo has said things that are not true. Last month Cuomo spread fake news about the safeguards involving the purchase of an AR-15. Just a few days earlier, the anti-gun Cuomo falsely claimed that Sen. Ted Cruz (R-TX) was afraid to talk to CNN about guns after the Senator had already talked to CNN about guns. Cuomo has also lied about Benghazi in order to protect Hillary Clinton.