CNN reported Monday morning that there were eight targets of what it called “retaliatory firings” by President Donald Trump of administration officials and staff who testified against him in Congress during the impeachment inquiry.

The problem: Several of the individuals CNN described as having “left” or being “forced out” in retaliatory firings departed for entirely different reasons. 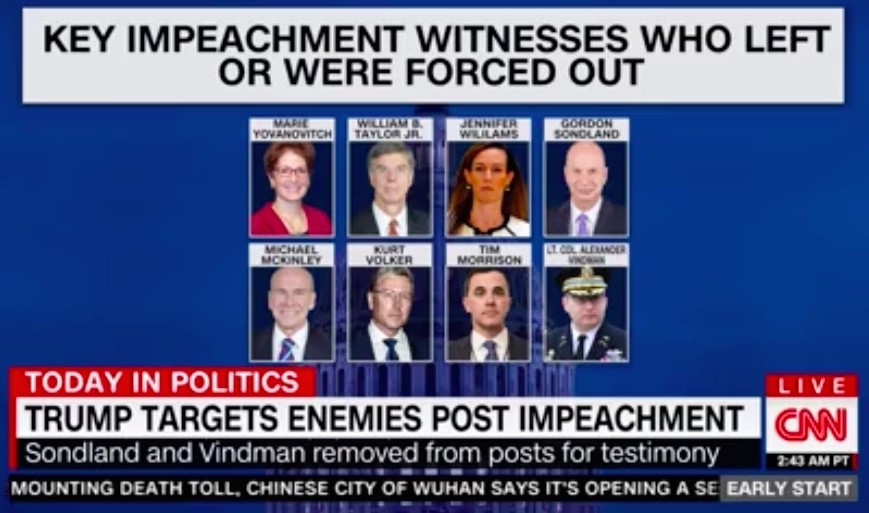 Ambassador Kurt Volker, the U.S. Special Representative for Ukraine, left because of Congress, not the president. He was called by Democrats as a witness but his testimony ended up helping Trump. Asked why he had resigned, he said the inquiry itself, not the president, had caused him to leave: “I felt that I would no longer be effective as a special representative with this impeachment inquiry beginning and my name associated with that and all the media attention around that. I didn’t think I would be able to go to Ukraine or meet with Russians and be able to carry out those duties in that way anymore.”

National Security Council (NSC) official Tim Morrison, whose testimony was also very helpful to the president’s defense against impeachment, specifically told Congress that his departure and the inquiry were unrelated: “I do not want anyone to think there is a connection between my testimony today and my impending departure,” he said. He explained that he had already decided to leave the NSC.

The only two witnesses who were removed after the impeachment inquiry were U.S. Ambassador to the E.U. Gordon Sondland, and NSC official Lt. Col. Alexander Vindman, who was reassigned along with his brother, Yevgeny, who had worked as an ethics official in the NSC.

Moreover, there is no proof that these removals were the result of “retaliation.” It was unclear how these officials could do their jobs with confidence after testifying in what amounted to a failed effort to bring down the president.

Sondland in particular was described by other witnesses as interfering and incompetent. Morrison also testified that Vindman had been suspected by others of leaking information — a charge he denied.