Vindman was removed from his job at the National Security Council on Friday and escorted from White House grounds.

In a statement, Lt. Col. Vindman’s lawyer said that there was “no question in the mind of any American” that his client had been fired for testifying against the president at the impeachment inquiry.

However, there may also have been an independent reason: he was suspected of being a leaker.

Morrison himself did not share that suspicion, but he testified that others expressed “concerns” about Vindman possibly leaking information.

Vindman’s lawyer prevented the committee’s Republican counsel from asking Morrison about the issue, saying it was “outside the scope” of the inquiry. 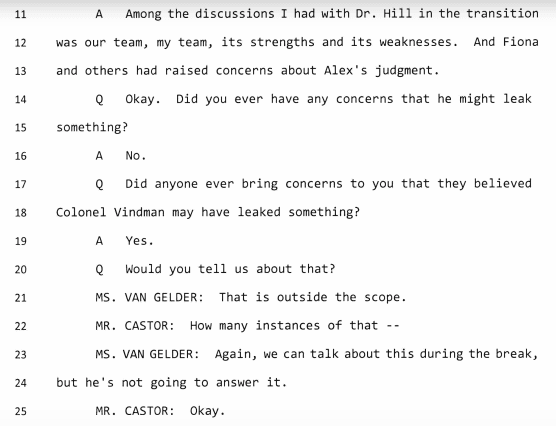 Lt. Col. Vindman denied the accusation when Rep. Jim Jordan (R-OH) asked him about the accusation of being a leaker in the committee’s public hearings in November: “I never did, never would. That is — that is preposterous that I would do that.”

However, Vindman would not reveal the name of the individual in the “intelligence community” to whom he gave a copy of the Ukraine call transcript.

The Trump White House has taken a tough line on leaks after several leaks in the early days of the administration — including the president’s classified conversations with foreign leaders — were leaked to the media.