The death toll due to Hurricane Ida has reached at least four following a highway collapse in Mississippi while millions had no power and flooding continued to be a threat Tuesday, according to reports.

Two deaths were confirmed in Louisiana which included an individual hit by a falling tree near Baton Rouge and a driver who drowned in New Orleans, USA Today writes.

“Gov. John Bel Edwards said at least 671 people had been rescued from floodwaters in Louisiana by Monday afternoon,” the outlet continued:

Ida roared onto the Gulf Coast near Port Fourchon, Louisiana, on Sunday with 150-mph winds before barreling toward Mississippi. Ida had quieted to tropical depression status Tuesday with sustained winds of 30 mph. The National Weather Service warned that the heavy rain and flooding threat would spread from the Tennessee and Ohio valleys up through the Mid-Atlantic states on Wednesday.

Two people died and at least ten others were hurt when their cars fell into a hole where a highway collapsed once Ida swept through George County, Mississippi. 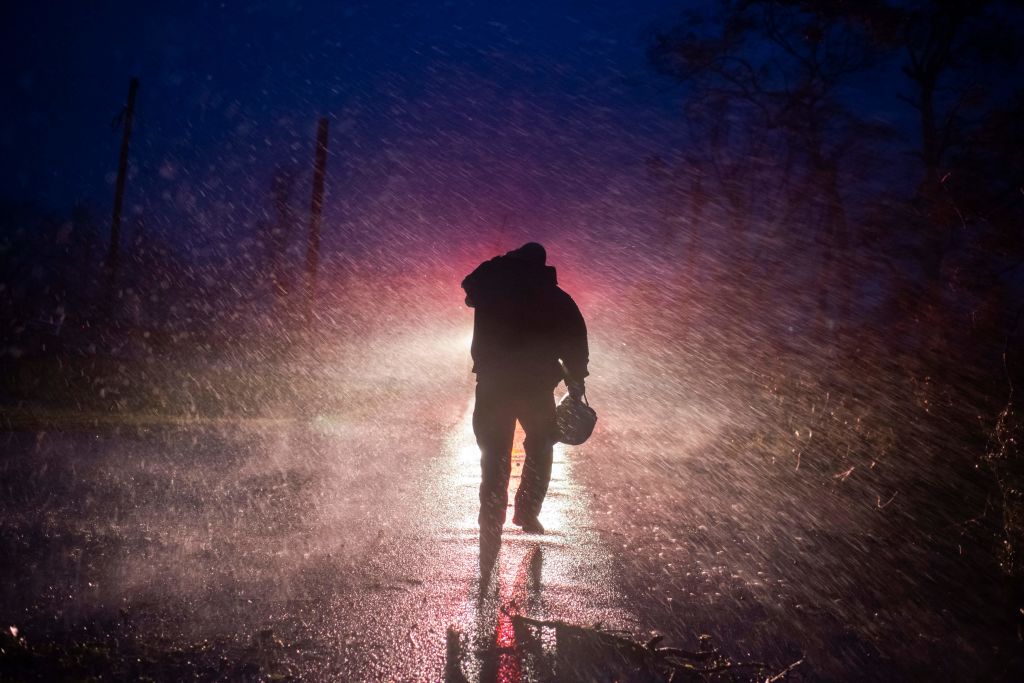 Montegut fire chief Toby Henry walks back to his fire truck in the rain as firefighters cut through trees on the road in Bourg, Louisiana as Hurricane Ida passes on August 29, 2021.  (Mark Felix / AFP via Getty Images)

“Torrential rain may have caused the collapse, and the drivers may not have seen that the roadway in front of them had disappeared Monday night, Mississippi Highway Patrol Cp. Cal Robertson said,” the outlet noted.

Meanwhile, an elderly man was apparently attacked by an alligator in floodwaters near Slidell, a city across Lake Pontchartrain from New Orleans, according to Jason Gaubert, a spokesman with the St. Tammany Fire District No. 1.

Gaubert reported the attack tore the man’s arm off and his wife went for help, but when she returned, he had disappeared into the water.

The St. Tammany Parish Sheriff’s Office (STPSO) detailed the incident in a Facebook post and said: “STPSO used high water vehicles and flatboats in an attempt to locate the victim, but as of this time all attempts have been futile.”

Video footage showed authorities at the scene and one official told KHOU “When deputies got out here, they noticed that there was a large amount of blood and then learned from his spouse that the gentleman, the body, was no longer present.”

According to the outlet, the case was being treated as a missing persons investigation.