There is little or no evidence Democrat-leaning Latinos will switch to vote for President Donald Trump if he supports a DACA giveaway, say election experts and polling data.

DACA is such a non-issue for Latinos it was not mentioned in a July 2020 poll by a pro-migration polling group, Latino Decisions. The pollster’s summary of the “Six-State Battleground Survey of Latinos,” concluded:

Latinos, and especially younger Latinos, demonstrate a lower intensity or enthusiasm about the 2020 election than earlier in 2020 and at this point in 2016. …  Expanding access and reducing costs of health care continue to be a top issue, as does fighting racial injustice against Latinos and Blacks.

The DACA issue was created by President Barack Obama to spur Latino turnout in 2012, and the subsequent bloc of “dreamers” were mobilized by far-left union activists and journalists to help win the “Gang of Eight” amnesty in 2014.

Since then, the issue has been kept alive by favorable media and by support from the West Coast investors who founded the FWD.us lobbying group. The group and allied lawyers have used DACA to undermine and weaken President Donald Trump’s popular immigration reform agenda because the investors profit from any greater inflow of consumers, renters, home-buyers, and cheap workers.

The DACA population is roughly one million — not counting illegal immigrant parents and native-born siblings — in a nation of 50 million Hispanics.

“Republicans should never try to pander on immigration issues to chase a fantasy of attracting Hispanic votes with liberal immigration policies,” said Jessica Vaughan, policy director at the Center for Immigraiton Studies. She continued:

For one thing, eeveryone can see through it. It is not a salient issue for them, and the voters who really care will not vote for the Republicans because they want the more radical policies that the Democrats are dangling rights now.

There were too many subgroups of Latinos to rely on stereotypes, said Vaughan. The Latino population includes people in Texas, Florida, and California, Hispanics from Mexico and Puerto Rica, plus Latino blue-collars and Latino white-collar professionals. It also includes new migrants who are voting for the first time and Latinos whose families who have been in North America since the 1800s, she said.

“They have the same concerns as other Americans – jobs, illegal immigration,  the pandemic, good schools — which are the very same issues that other Americans care about,” she said.

“I don’t think most Latino voters expect a candidate whom they agree with 100 percent of the time,” she added. Like other Americans, they consider “if the candidate will improve progress for you, your kids and your country,” and they want to avoid weak, vacillating candidates, she said.

“That was the problem with Jimmy Carter,” she added.

The July poll of 1,200 registered Latino voters — which did not mention DACA — showed the issue of “stopping discrimination against immigrants/Latinos” ranked fourth, after healthcare, the coronavirus crisis, and “improving wages and comes.”

The “discrimination” question was deemed an important issue among nine percent of Trump voters, and just 25 percent of Biden voters. The issued scored only 20 percent among undecided Latinos, putting it at the fifth-ranked slot, behind the pocketbook issue of “creating jobs.” 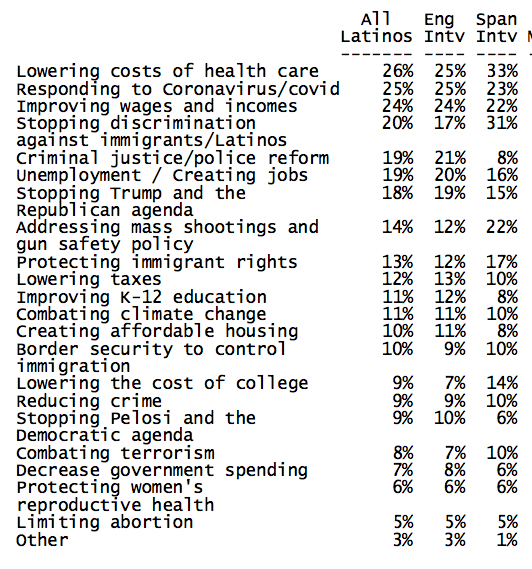 The poll also showed Trump’s economic success, as 75 percent of respondents said the economy was working well for them.

Many polls show Americans — including Latinos — somewhat want to welcome immigrants, but they also strongly prefer jobs and wages go to their American communities.

This decent, two-sided perspective allows pro-migration groups — such as the FWD.us investor group — to get high numbers in push polls asking for support of DACA amnesties in a “Nation of Immigrants.” But many other polls show those voters strongly prefer their neighbors and other Americans get American jobs before companies import more foreign workers.

For example, 65 percent of all registered voters told the Washington Post in April they support “temporarily blocking early all immigration into the United States during the coronavirus outbreak.” That goal was held by a greater share of Hispanics — 69 percent – as well as by 83 percent of Republicans, and 67 percent of independents.

A June-July poll of 1,810 likely voters by Rasmussen Reports showed 67 percent of all voters said, “no,” to more foreign workers while other Americans need jobs. Among Hispanics, the result was 58 percent against more immigration and just 31 percent for continued immigration.

The same poll showed that 66 percent of all voters want Congress to make employers check the legality of their job candidates. Among Hispanics, the support was 55 percent for and just 19 percent against.

The poll showed strong pocketbook support for Trump’s June 22 reform of visa-worker pipelines. The poll asked: “An Executive Order has paused the admission of hundreds of thousands of foreign workers until the end of 2020. Should that pause be extended until unemployment rates are back down to the level they were before the pandemic?”

Just 22 percent of Hispanic joined with the Fortune 500 and the U.S. Chamber of Commerce to oppose Trump’s June 22 rule.