A spokesman for the U.S. Bishops’ Conference (USCCB) has disassociated Church leaders from remarks in praise of Kamala Harris made last week by the USCCB’s assistant director of African American Affairs.

“I was so elated,” Grimes said. “We, the community, need good news, and this was just wonderful.”

Grimes said that black Catholics can expect Biden and Harris to enact policy that is “favorable to people on the margins.”

“If I say ‘for African Americans,’ it benefits other people on the margins as well,” she said.

“I would expect he (Biden) would put good people in his Cabinet, who would not damage the agencies, or ignore the mission,” she added.

While Harris was not Grimes’s “top candidate” during the primaries, the USCCB official said Harris is “really deserving and brings a lot to the table,” as others gushed over her nomination elsewhere in the media:

In its article on the story, Catholic News Agency noted the irony that when another official made similar comments last year in favor of Donald Trump, she was removed from her position at the conference. No such punishment has yet been meted out to Ms. Grimes.

Instead of firing her, the bishops have merely clarified that Grimes’s words were not made in an official capacity.

“Because the comments in question may have led to confusion among the faithful, let me be clear,” he said. “As Catholics, we are each called to evaluate candidates for public office by how closely their policies align with Gospel principles, as expressed by the U.S. bishops in Forming Consciences for Faithful Citizenship.”

The text Rogers references, whose full title is Forming Consciences for Faithful Citizenship: A Call to Political Responsibility from the Catholic Bishops of the United States, is meant to provide a framework for Catholic voters in the United States.

That document places unique emphasis on abortion as Catholics’ “preeminent priority” because “it directly attacks life itself, because it takes place within the sanctuary of the family, and because of the number of lives destroyed.”

“Our efforts to protect the unborn remain as important as ever, for just as the Supreme Court may allow greater latitude for state laws restricting abortion, state legislators have passed statutes not only keeping abortion legal through all nine months of pregnancy but opening the door to infanticide,” the bishops declare. “Additionally, abortion contaminates many other important issues by being inserted into legislation regarding immigration, care for the poor, and health care reform.” 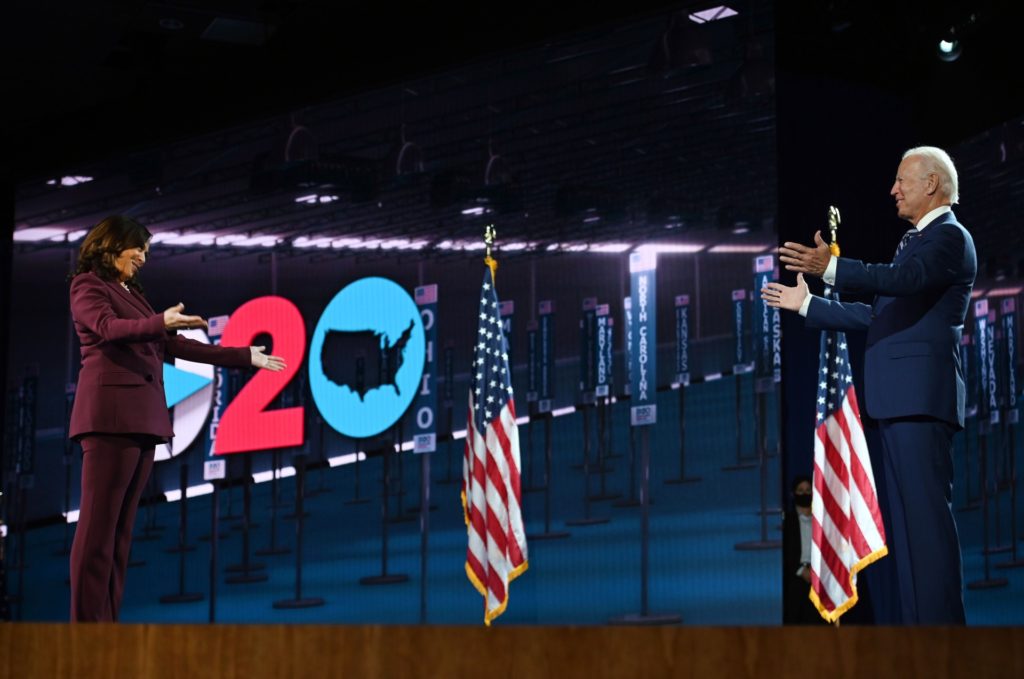 The text goes on to underscore abortion as a prime example of “intrinsically evil” actions, which “must always be rejected and opposed and must never be supported or condoned.”

“In our nation, abortion and euthanasia have become preeminent threats to human dignity because they directly attack life itself, the most fundamental human good and the condition for all others,” the bishops note. “It is a mistake with grave moral consequences to treat the destruction of innocent human life merely as a matter of individual choice.”

A legal system that violates the basic right to life on the grounds of choice is “fundamentally flawed,” they conclude.

For her part, Kamala Harris is a fierce defender of abortion rights, and even called out Biden himself for not being “pro-choice” enough for the Democrat party, a measure that seems to have contributed to Biden’s shift to the left on the abortion question.

The National Catholic Register warned last week that Biden’s choice of Kamala Harris as running mate may hurt his appeal with religious voters due to her “aggressive pro-abortion and anti-religious freedom record.”

In her August 15 essay, Register staff writer Lauretta Brown noted that Harris’s stance on a number of issues directly collides with Catholic teaching and thus could “spell trouble for his efforts to appeal to religious voters.

Catholic League President Bill Donohue also declared that Harris has a “Catholic problem” that could hurt Biden’s chances of winning over Catholic voters.

Harris has tainted herself “with the brush of anti-Catholicism,” Dr. Donohue wrote in an August 14 essay, by harassing Catholic judicial nominees and subjecting them to the equivalent of a religious litmus test.

In 2018, Harris suggested that membership in the Knights of Columbus disqualified a candidate for the federal bench during the examination of federal district court nominee Brian Buescher.

Harris’s stated objection to the Knights of Columbus stemmed from its unapologetic pro-life position, Donohue observed, but “her real target was the Catholic Church.”