Andrew Bates, a spokesman for former Vice President Joe Biden’s campaign, retweeted a reaction to the first night of the Republican National Convention (RNC) on Monday night: “I can’t believe that there is [sic] 3 more nights of this shit.” 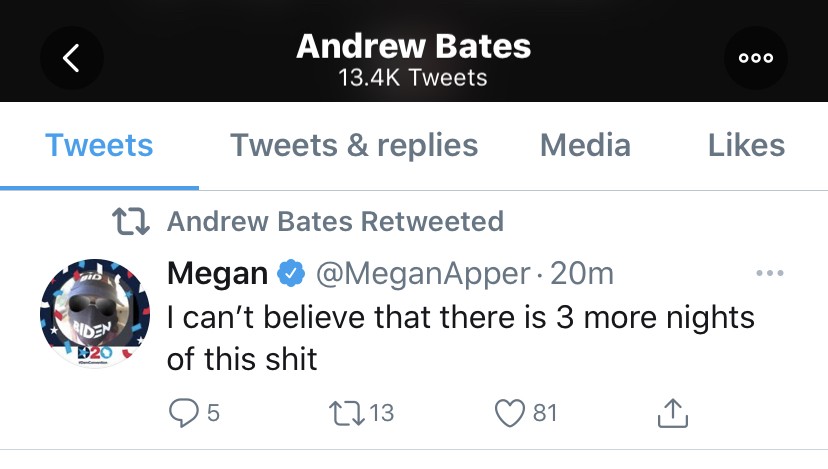 Bates, who is the director of the Biden campaign’s “rapid response,” was widely quoted in the media before the RNC predicting: “What they will hear from Donald Trump this week are the last things our country needs: more desperate, wild-eyed lies and toxic division in vain attempts to distract from his mismanagement.”

Contrary to that prediction, the first night of the RNC sounded optimistic themes and emphasized the greatness of America, as Republicans sought to contrast their message to the “season of darkness” themes of Biden’s speech at the Democratic National Convention last week.

Last month, Bates also tweeted a widely-debunked hoax that President Trump had held a Bible upside down when he marched to St. John’s Episcopal Church in a silent demonstration against the Black Lives Matter riots that had burned it the night before.

Bates — and his boss — made the false claim about an upside-down Bible, which has been debunked not only by conservative websites like Breitbart News, but by left-leaning fact-checking websites such as Snopes.com.

“[P]hotographs from Getty Images and The Associated Press show that Trump was holding this bible [sic] the right way up when he was photographed,” Snopes noted.