VERDICT: FALSE. Trump held the Bible correctly. The false claim has been repeated by the media, but remains false.

Former Vice President Joe Biden made his false claim after a speech on race in Wilmington, Delaware, on Tuesday.

Biden’s claim came in the course of an answer to a question from a journalist about how he would handle violent protest.

He said, in part, that President Trump “decided he had to walk across from the White House through a group of peaceful demonstrators, to an Episcopal Church to hold a Bible upside down, which I don’t know how often he reads, and he used the military to do that.”

Every part of that statement is false. The “peaceful” protesters in Lafayette Park had assaulted journalists and law enforcement officers; they had also set fire to an historic structure and vandalized nearby buildings. The “military” was not involved: rather, the U.S. Park Police and the Secret Service made a decision to clear the park the day before.

The specific claim about the Bible is also a lie — as shown by any Google Images search of Trump standing at the church. 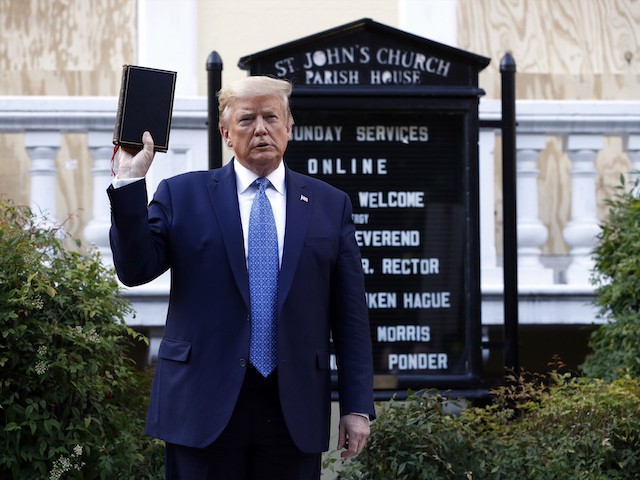 President Donald Trump holds a Bible as he visits outside St. John’s Church across Lafayette Park from the White House Monday, June 1, 2020, in Washington. Part of the church was set on fire during protests on Sunday night. (AP Photo/Patrick Semansky)

.@JoeBiden: "When the president decided he had to walk across from the White House through a group of peaceful demonstrators to an Episcopal church to hold a Bible upside down — which, I don't know how often he reads…it was about, as his own people say…dividing the country." pic.twitter.com/BUv4GisldC

But even left-leaning Snopes.com has debunked the false claim that Trump held the Bible upside-down at the church.

“While many took to Twitter to criticize the use of force on protesters for a photo-op, some incorrectly claimed that the president was holding the bible [sic] upside down,” Snopes notes, adding that “photographs from Getty Images and The Associated Press show that Trump was holding this bible [sic] the right way up when he was photographed.”