A Boston priest wrote this week people can be pro-life even if they support abortion rights, urging his followers to vote for Joe Biden in November.

“I am pro-life and I believe in a woman’s right to choose,” writes Msgr. Paul Garrity, pastor of the parish of the Sacred Heart in Lexington (MA), in a recent Facebook post. “I will vote for Joe Biden for President because I believe that Joe Biden is Pro-life like me.”

The Boston priest said that “Catholics and others who believe as I believe should elect Joe Biden to be the next president of the United States of America.”

“I am pro-life and I believe that every woman who becomes pregnant deserves to have the freedom to choose life. This is what I believe Joe Biden believes and is one of the many reasons that I will vote for him in November,” said Msgr. Garrity in his August 23 post titled “I AM PRO-LIFE AND SUPPORT JOE BIDEN.”

In his post, the priest also takes aim at an organization called Catholic Vote, insisting that the group does not speak for the Catholic Church. He also says that his own nuanced position on abortion “reflects the wisdom of Pope Francis.” 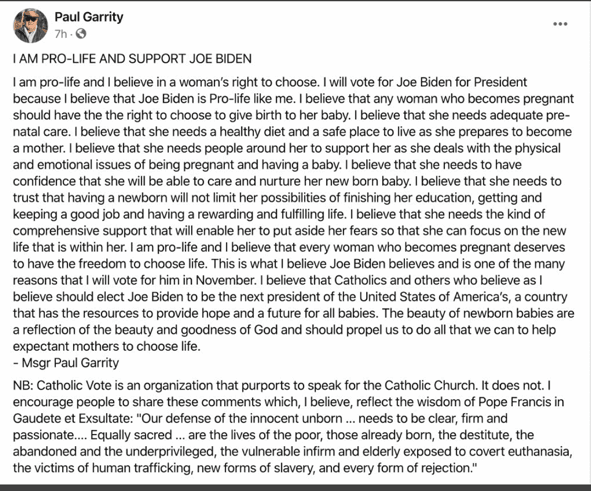 In a follow-up email statement to Catholic News Agency (CNA), Msgr. Garrity insisted that Catholics “should not be ‘single issue’ voters” and that the Church is “neutral” on the issue of voting.

Garrity said the reason he posted on Facebook was “to tell Catholics that it is okay to vote for Joe Biden, that they have a moral choice to make in the upcoming election.”

Biden is the “pro-life candidate,” Garrity said, that adding that “in the 2016 election, church-going Catholics were told they had no choice by bishops and priests.”

“I am hopeful this will not happen again,” he said.

Last Friday, Tennessee Bishop Rick Stika questioned Joe Biden’s claims to being a devout Catholic, suggesting that Biden’s public stance against Church teaching regarding abortion means he is not in full communion with the Church.

“Don’t understand how Mr. Biden can claim to be a good and faithful Catholic as he denies so much of Church teaching especially on the absolute child abuse and human rights violations of the most innocent, the not yet born,” Bishop Stika wrote.

Last May, the bishop of Providence, Rhode Island, insisted that a person cannot be Catholic and pro-abortion because it would be a “contradiction in terms.”

“Just saw a headline in a Catholic newspaper with the phrase ‘pro-abortion Catholic.’ Sorry. That’s a contradiction in terms,” wrote Bishop Thomas J. Tobin on Twitter. “You can’t be a Catholic, at least not an authentic one, and be ‘pro-abortion.’ Or ‘pro-choice.’ It’s the same thing.”

The Catholic Church teaches that abortion is a grievous moral evil equivalent to murder, as it involves the intentional killing of an innocent unborn child. Being in full communion with the Catholic Church entails embracing its core teachings on faith and morals.

The Catechism of the Catholic Church states, “From the first moment of his existence, a human being must be recognized as having the rights of a person — among which is the inviolable right of every innocent being to life.”

During his campaign, Mr. Biden has reiterated his support for abortion on demand and has promised to work to repeal the Hyde and Helms Amendments that protect taxpayers from having to finance abortions.