Sudan’s military dissolved the civilian government on Monday, placing Prime Minister Abdalla Hamdok and most of his cabinet under arrest.

Reports indicated that violence had erupted in the streets as supporters of the civilian government attempted to fight back.

A “Sovereign Council” has governed Sudan since longtime dictator Omar al-Bashir was overthrown in April 2019. The military dominated the transitional government, but the governing council included civilian members. The military promised it would hold elections as soon as possible to restore full civilian government, but it pushed back the date for this transition back several times, most recently to 2023. 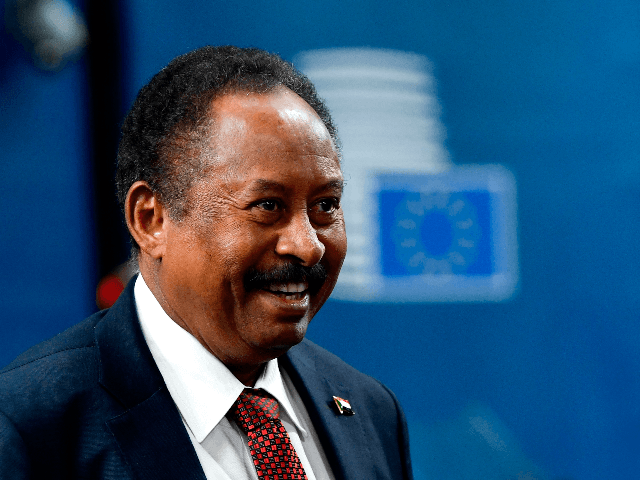 Sudan’s Prime Minister Abdalla Hamdok arrives prior to a bilateral meeting with the minister of the European Union for Foreign Affairs and Security Policy at the EU headquarters in Brussels on November 11, 2019. (John Thys/AFP via Getty Images)

The civilian side of the transitional government drew most of its members from the Forces of Freedom and Change (FFC), the coalition that organized the 2019 protests which ultimately led to Bashir’s ouster.

The FFC broke apart last month because some of its members felt that four powerful political parties had marginalized and deprived them of influence. The component groups of the FFC also reportedly squabbled over how to dispose of funds recovered from Bashir and his corrupt associates. The disgruntled smaller parties that broke away from the FFC demanded the dissolution of the Sovereign Council and the establishment of a new technocratic government.

Tens of thousands of protesters hit the streets in October, some representing the breakaway groups of the FFC and others who wanted the military to seize total power and impose order. Some of Prime Minister Hamdok’s economic reforms angered pro-military supporters. The International Monetary Fund (IMF) demanded those reforms as a condition for further financial assistance. Among other unpopular measures, Hamdok ended hefty subsidies for fuel purchases, which roughly doubled the price of gasoline.

Islamists who found themselves pushed to the sidelines after the removal of brutal Islamist tyrant Bashir also supported the military.

On Friday, after the conclusion of Islamic prayer services, pro-military demonstrators staged a sit-in outside the presidential palace in Khartoum and demanded the dissolution of Hamdok’s government. Meanwhile, security forces employed increasingly brutal tactics to suppress pro-democracy protests, reportedly including gunfire.

The coup demanded by pro-military demonstrators apparently took place on Monday morning, as military forces arrested Hamdok and moved him to an “undisclosed location.”

They also arrested Hamdok’s ministers of communication, information, finance, and industry in predawn raids, along with the governor of Khartoum, Ayman Khalid, and the chief spokesman for the Sovereign Council, Mohammed al-Fiky Suliman.

“The military has also blocked all roads and bridges leading into Khartoum city. We’ve seen soldiers blocking access and they are telling us these are the orders they got,” Al Jazeera News reported. “They are saying access to Khartoum city is to be restricted, and this is raising concern because that’s where the government institutions are, that’s where the presidential palace and the prime minister’s offices are located.”

Army troops seized control of state television and radio stations, detaining staffers present at the facilities. They cut internet connections and shut down bridges to suppress the public’s reaction to the coup. 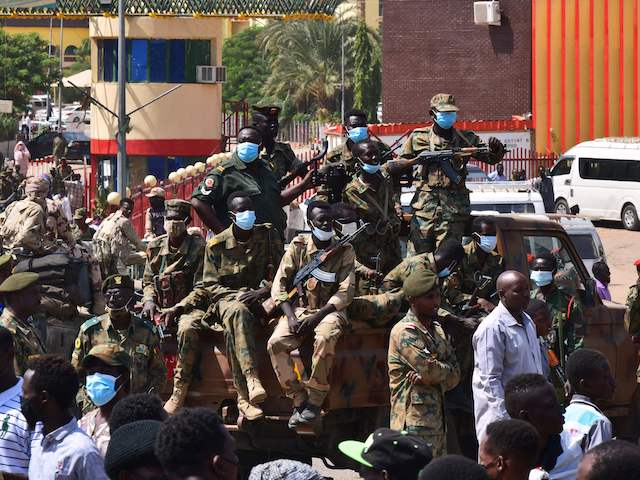 Sudanese security forces keep watch as they protect a military hospital and government offices during protests against a military coup overthrowing the transition to civilian rule on October 25, 2021, in the capital’s twin city of Omdurman. (AFP via Getty Images)

Hamdok managed to release a statement before his abduction, urging pro-democracy protesters to remain on the street but stay peaceful. The influential Sudanese Professionals Association (SPA), the main pro-democracy group, also called for peaceful resistance.

“We urge the masses to go out on the streets and occupy them, close all roads with barricades, stage a general labor strike, and not to cooperate with the putschists and use civil disobedience to confront them,” the SPA said in a statement.

Al Jazeera reported thousands of pro-democracy protesters answered the call, burning tires and marching through the streets of Khartoum toward military headquarters, where witnesses heard gunfire. The Central Committee of Sudanese Doctors reported 12 injures as of Monday morning. 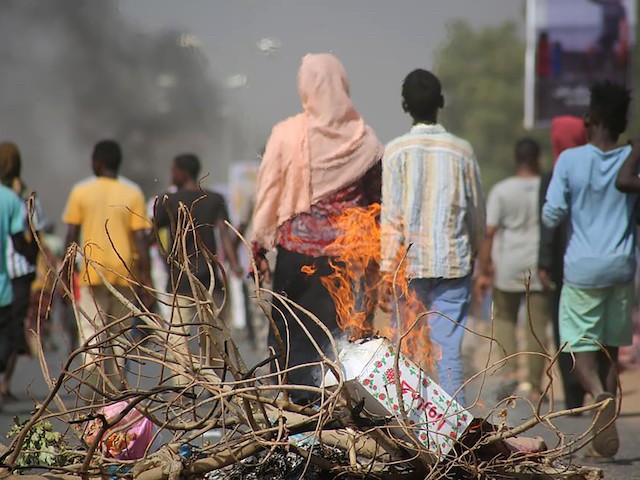 Jeffrey Feltman, U.S. special envoy to the Horn of Africa, said on Monday the United States is “deeply alarmed at reports of a military takeover of the transitional government.”

“This would contravene the Constitutional Declaration and the democratic aspirations of the Sudanese people and is utterly unacceptable,” Feltman said.

“As we have said repeatedly, any changes to the transitional government by force puts at risk U.S. assistance,” he added.

The U.S. Embassy to Sudan on Monday called for the military to stand down and stop “disrupting the transition to democracy.”

The embassy also advised Americans in Sudan to “shelter in place and remain aware of their surroundings,” warning the Internet is “non-functional” in Khartoum, international air travel has been shut down, and there are “unverified reports of violence against protesters.”

U.S. President Joe Biden and his administration were silent on Monday morning, but French President Emmanuel Macron immediately condemned the coup and demanded the release of Prime Minister Hamdok.