Chinese Foreign Ministry Wang Yi spent much of Sunday discussing potential Chinese investments with his counterparts from Algeria, Tanzania, and Zambia, claiming that the war between Ukraine and Russia demands even more Chinese attention on the continent of Africa.

“The more turbulent the international situation is, the more attention should be paid to the voices of African countries,” Wang reportedly said on Sunday, according to the government newspaper Global Times, “and the more support and assistance should be provided to Africa.”

In his conversation with Tanzanian Minister for Foreign Affairs Liberata Mulamula on Sunday, Wang specifically raised the issue of the Belt and Road Initiative (BRI), China’s plan to litter the developing world with expensive infrastructure projects it can then use to increase its leverage in host countries.

“The two sides agreed to further align the Belt and Road Initiative with Tanzania’s Development Vision 2025 and expand bilateral cooperation in agriculture, trade, investment, infrastructure and other fields,” according to China’s Foreign Ministry.

China's years-long expansion into Africa has left the continent particularly vulnerable to the spread of a new iteration of coronavirus. https://t.co/ixcNPeprVB

The Times, citing its usual staple of Chinese Communist Party-approved “experts,” also asserted that Beijing would seek to expand its BRI in Africa in light of the Ukraine war.

The BRI, previously known as “One Belt, One Road,” is a global infrastructure plan in which China offered poor countries predatory loans used to pay China to buy prohibitively expensive roads, ports, and railways. The Communist Party promotes the plan as a mode of reconstructing the Ancient Silk Road connecting Beijing to Western Europe, but has greatly expanded the economic scope of the project to Africa, Latin America, and Southeast Asia. When the countries inevitably fail to pay back their loans in time, China seizes the assets to make up for the loss, granting China both increased economic and geopolitical influence. Outside economic observers and the U.S. government have warned developing countries repeatedly that BRI projects are “debt traps” designed to undermine the sovereignty of targeted states.

In Africa, BRI projects have resulted in an influx of Chinese businessmen accused of a variety of racist behavior, including implementing “apartheid” policies at construction sites such as banning African workers from using the same cafeterias, site transports, and other amenities as the Chinese. Chinese workers have also reportedly only issued instructions in Chinese written text, making it impossible for Africans to take on managerial roles in the projects.

“With stakes worth billions of dollars in businesses ranging from agriculture to oil, gas, and construction, China’s Greek-gift economic assistance is increasing unemployment and worsening job creation in Nigeria,” Nigeria’s This Day newspaper lamented in 2019. “It’s such a pathetic situation that Nigerians are slaves in their country to Chinese exploiters!” 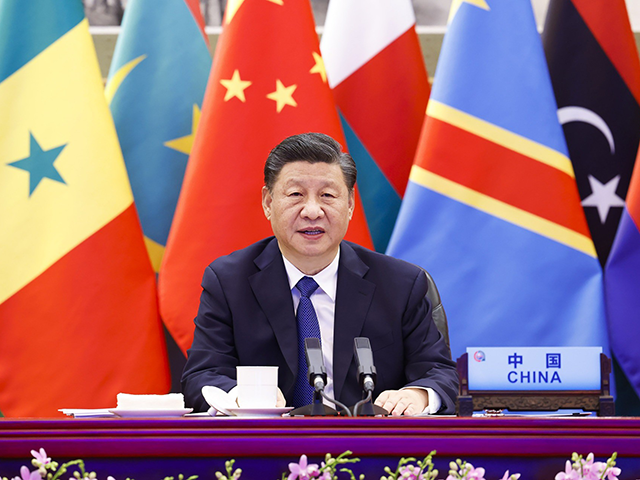 File/ Chinese President Xi Jinping delivers a keynote speech at the opening ceremony of the Eighth Ministerial Conference of the Forum on China-Africa Cooperation (FOCAC) via video link in Beijing on Monday, Nov. 29, 2021. (Huang Jingwen/Xinhua via AP)

The Global Times presented only the alleged positive aspects of the BRI, which China argues is the potential for development in parts of Africa that would otherwise not have the opportunity to build state-of-the-art travel infrastructure. The state propaganda outlet also contended that the war between Russia and Ukraine would make Africa more economically vulnerable, giving China an opportunity to invest greater sums in the region.

“The sanctions against Russia have significantly hit the world economy, and that has a big impact on economic recovery in less developed regions of Africa,” a Global Times expert identified as Chinese Academy of Social Sciences professor He Wenping told the outlet. “Rising oil and gas prices and food shortages have all had an impact on some African countries.”

“China will continue to help Africa fight the coronavirus epidemic and promote economic cooperation like the Belt and Road Initiative to minimize the negative impact of [Chinese coronavirus] on Africa so Africa can recover economically, He said,” according to the newspaper.

Ukraine and Russia are both major producers of wheat in the global market, prompting concerns that countries relying on either or both countries may face extreme food shortages. Ukraine and Russia are also large-scale producers of fertilizer, meaning an abrupt halt in production caused by war could result in a significant reduction of crop production all over the world. Ukraine itself, agricultural experts warned this weekend, has essentially ceased exporting grain since the war began on February 24 and farmers are not preparing to grow crops given the current war. Adding to concerns is that much of the most intense fighting is occurring in or around major port cities like Mariupol.

“Half the world’s population gets food as a result of fertilisers… and if that’s removed from the field for some crops, [the yield] will drop by 50%,” Svein Tore Holsether of agricultural company Yara International, recently warned.

Shanghai’s Fudan University estimated in a report published this weekend that China would receive about $14 billion in debt service payments from 68 of the world’s poorest countries this year, about a fourth of what the countries would pay to the world in total.