Chinese authorities added four cities to their lockdown of Wuhan, home to a deadly new virus spreading rapidly, on Thursday afternoon, bringing the total population within the transport shutdown zone to about 20 million people.

Wuhan itself is home to 11 million people and sits in the heart of central China, making it a major transportation hub where many train connections to various provinces convene. Wuhan also boasts an international airport; Beijing suspended all flights in or out late Wednesday to contain the virus. An estimated 30,000 people flew out of the Wuhan airport daily before the lockdown.

The sprawling measures are a response to a virus believed to have originated in Wuhan in December that has now been confirmed to infect over 500 people and kill 17. Authorities suspect that the virus first jumped from wild animal meat to humans at a seafood and game market in Wuhan and denied evidence that the virus was capable of human-to-human transmission until this week. On Monday, Chinese health officials announced they had identified the virus as being part of the coronavirus family, a relative of the virus responsible for the Sudden Acute Respiratory Syndrome (SARS) outbreak of 2003 that killed nearly 800 people.

Scientists in China published a paper on Wednesday revealing findings that link the virus’s DNA structure to snakes native to the Wuhan region.

The virus produces flu-like symptoms including fevers, coughs, and other respiratory ailments before ultimately causing pneumonia.

The “Wuhan virus” outbreak has arrived in time for what is typically one of the highest-travel events of the year in Asia, Lunar New Year, which takes place on Saturday. Beijing and several other large Chinese cities have canceled Lunar New Year celebrations at temples and public plazas to avoid assembling large numbers of people in contained spaces and exacerbating the outbreak. 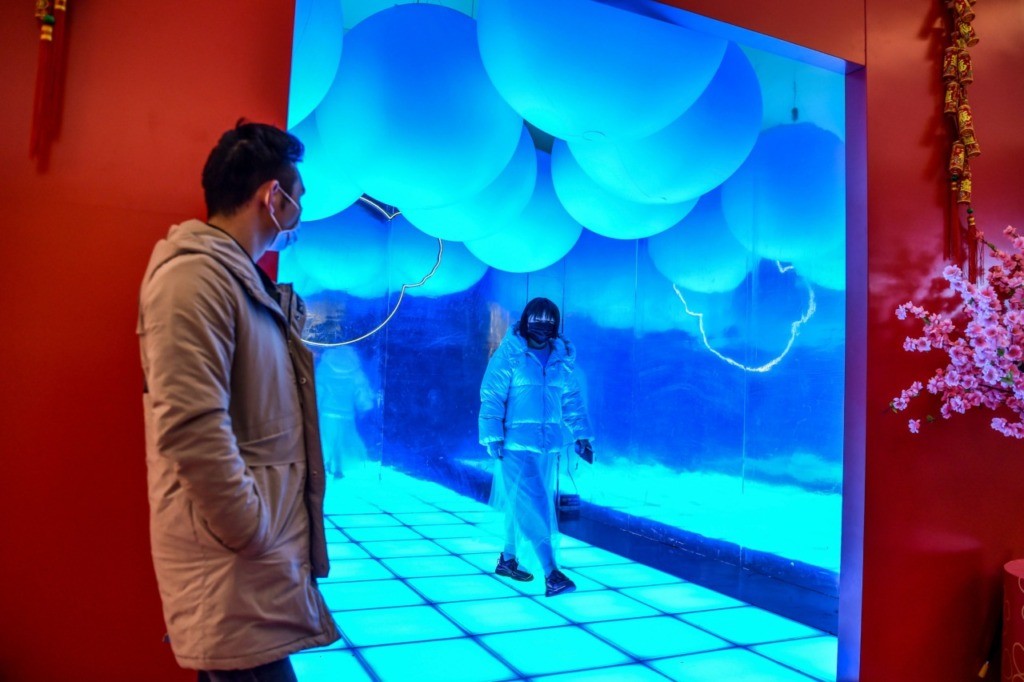 People wearing protective masks walk inside a mall in Wuhan on January 23, 2020. – Wuhan residents called for help and shared worries of food shortages on January 23, with streets in the virus-hit central Chinese city left deserted after it was put on lockdown. (HECTOR RETAMAL/AFP via Getty)

The New York Times, citing Chinese officials, reported that the cities of Huanggang, Ezhou, Chibi, and Zhijiang joined Wuhan in having all trains into or out of the cities canceled and other travel restrictions imposed; most of the new restrictions took effect at midnight local time. The new travel limitations now affect about 20 million people living in the greater Wuhan area; Wuhan is the regional capital of Hubei province.

According to Hong Kong’s RTHK broadcaster, in addition to limits on public transportation, authorities set up checkpoints to inspect every vehicle coming into the city for livestock. Huanggang announced it would also shut down bars and movie theaters to prevent large gatherings.

Some global health officials have expressed concern that the measures have come too late, particularly given the documentation of several cases outside of China and reports of Wuhan residents sneaking out of the city before the travel restrictions took effect. Wuhan residents on Weibo, China’s heavily censored legal social media site, reportedly began using the hashtag “escape from Wuhan” overnight to describe how they evaded police and crossed city limits. Some of them openly admitted to having a fever and taking medication before being tested to avoid being isolated. Among those was a woman who traveled out of Wuhan to France and posted on WeChat, another Chinese censored social media outlet, that she had a fever when she left the city but successfully fooled authorities into letting her into France.

“I had a fever and a cough before I left – I was so scared. I quickly took some medicine and checked my temperature. Luckily the temperature was controlled and I had a smooth journey through the border,” she wrote.

Within Wuhan, reports independent from the communist government report panic and fear.

“Some residents said they were on the ‘verge of tears’ as they read news of the lockdown, adding that their families’ lives were ‘threatened constantly and the target of online abuse,'” RTHK reported, citing agitated social media posts on Weibo. The Chinese regime also appears to be allowing comments critical of the local Wuhan government to remain online without censorship, but not remarks critical of the central Communist Party powers in Beijing. Authorities revealed that they had “handled” eight individuals for posting comments on social media that the Communist Party did not approve of, but did not elaborate on how they “handled” these cases or if these individuals retained their freedom.

In an attempt to boost morale and paint a more positive photo of the situation, the Global Times published a “salute to Wuhan citizens” on Thursday for their “great contribution to stop the uncontrolled spread of the epidemic.”

“As a media organization, we want to pay tribute to the city of Wuhan and its over 10 million citizens. We also believe that the entire Chinese nation will pay tribute to Wuhan citizens who think of the big picture at this critical moment,” the newspaper declared.

Residents’ attempts to avoid isolation and containment appear to have resulted in health officials documenting cases in nearly every corner of the country. The Global Times, a Chinese state propaganda outlet, reported on Wednesday that authorities identified patients carrying coronavirus as far from Wuhan as Xinjiang, the largely Uyghur province bordering Afghanistan, threatening the war-torn region of west Asia. Outside of China, Taiwan, Japan, South Korea, Thailand, and the United States have identified patients carrying the virus.

The latest estimates from the World Health Organization at press time are that officials have confirmed 581 cases of the new virus and 17 patients have died. Among those still living, doctors have identified 95 people as having “severe” cases. The overwhelming majority of cases have been identified within China.