Xi allegedly urged Tedros not to declare the outbreak a pandemic yet at the time of the phone conversation, which the German newspaper said had occurred on January 21. He also reportedly encouraged Tedros not to share information showing that the virus could spread from person to person.

The conversation allegedly occurred a week before Tedros personally visited Beijing – despite mounting concerns that international travel may hinder the fight against the outbreak that at the time was largely contained in China – and discussed the newly identified virus with Xi.

Tedros declared the Chinese coronavirus crisis a pandemic on March 11, the day after Xi Jinping visited Wuhan, the origin city of the virus, and declared that China had beaten its local outbreak. Xi avoided Wuhan until then despite reports indicating cases of a contagious respiratory disease spreading in the central Chinese city as early as November 2019.

The W.H.O. denied the conversation in the Der Spiegel report in a series of tweets.

The German newspaper published a report Friday in which it claimed that Germany’s Federal Intelligence Service (BND) was hesitating to support claimed by American Secretary of State Mike Pompeo that “enormous evidence” existed linking the pandemic to the Wuhan Institute of Virology, a biological laboratory that had been studying highly contagious coronaviruses of animal origin at the time the outbreak began.

The story also claimed, “according to the BND, China pushed the World Health Organization (W.H.O.) to delay a global warning after the virus has broken out at the highest level. On January 21, China’s leader Xi Jinping asked W.H.O. chief Tedros Adhanom Ghebreyesus to hold back information about a human-to-human transmission and to delay a pandemic warning.” 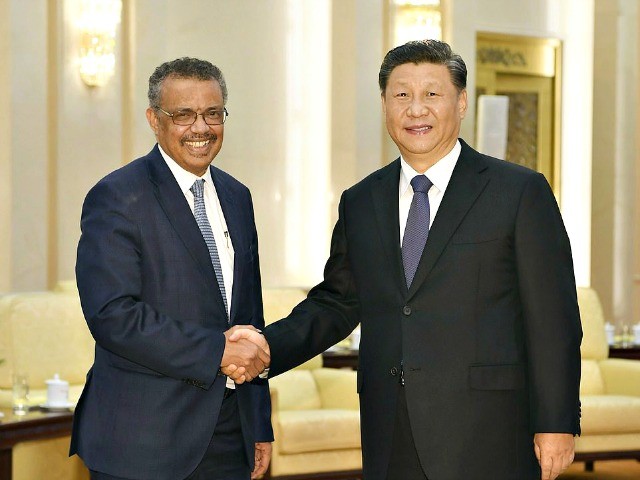 Tedros Adhanom Ghebreyesus, Director General of the World Health Organization (W.H.O.) shakes hands with Chinese President Xi Jinping before a meeting at the Great Hall of the People, on January 28, 2020 in Beijing, China. (Photo by Naohiko Hatta – Pool/Getty Images)

The BND’s alleged concern that China’s behavior had significantly hindered the fight against what would become a pandemic echoes similar statements from other intelligence agencies leaked to the press. Among the most prominent is an alleged intelligence dossier leaked to Australia’s Saturday Telegraph, which identified its origin as the “Five Eyes” intelligence group linking agents from the United States, Britain, Australia, Canada, and New Zealand.

The dossier, as reproduced to the Australian newspaper, found evidence of a massive, national Chinese Communist Party campaign to keep information about the virus, including information that could have helped contain its spread, from the general public. Among the actions Beijing took against its people were the censorship of key search terms such as “Wuhan unknown pneumonia;” destruction of early samples of the virus, which scientists could have used to trace its evolution, and a marked insistence to groups like the W.H.O. that the virus could not spread from person to person. Scientists have now confirmed the virus is highly contagious, resulting in the mass quarantining of asymptomatic people, even in cases of no recorded exposure to the virus.

“Despite evidence of human-human transmission from early December, PRC [People’s Republic of China] authorities deny it until January 20th,” the Saturday Telegraph quoted the report as reading. “The World Health Organization does the same. Yet officials in Taiwan raised concerns as early as December 31st, as did experts in Hong Kong on January 4th.”

Taiwan’s government confirmed in March that it had attempted to contact the W.H.O. about the pneumonia cases, noting that its experts had begun isolating patients, a sign that evidence existed for human-to-human transmission.

“Taiwan did report our concern on the severity of coronavirus last December to the W.H.O.,” Taiwan’s representative office in America told Breitbart News at the time. “But as a rule, our reporting is always a one-way street. WHO mostly ignored our messages and never shared information as they do to other countries.”

The Chinese Communist Party prevents Taiwan, a sovereign state that has never in its history been ruled by Beijing, from officially participating in the W.H.O. China illegally claims Taiwan as a province.

In January, a month after Taiwanese officials stated they had warned of a contagious disease spreading from China, the W.H.O. claimed that “no clear evidence” existed that the Chinese coronavirus was contagious.

The Chinese government admitted to the arrests of eight individuals, including doctors, in January for sharing information on social media on how to protect oneself from contagious diseases, including advice such as washing one’s hands. One of the arrested, Dr. Li Wenliang, later died in mysterious circumstances; the government claimed he had contracted the Wuhan coronavirus and died despite being 34 years old and healthy prior to infection, not a member of the most at-risk groups.

The W.H.O. has consistently praised the Chinese government for its handling of the virus and discouraged mistrust of the communist regime. The W.H.O. explicitly warned against travel restrictions for those coming from Wuhan or elsewhere in China, despite the fact that these restrictions could have identified coronavirus patients early and kept them from spreading the disease elsewhere on the planet. Tedros’ visit to Beijing was, in part, a vote of confidence in favor of travel ties to China.

“The W.H.O. noted that some countries are planning to evacuate their citizens from China, saying there is no need to overact and the W.H.O. is fully confident that the Chinese government can bring the spread of the disease under control,” Chinese state media reported while Tedros was in Beijing on January 28.

The W.H.O. has failed to address China’s travel bans on most foreigners, currently in place because the Communist Party claims only “imported” cases of the disease pose a risk. The Party’s statements have resulted in a wave of racist attacks on black people in Guangzhou, a southern city with a high population of African immigrants. Tedros, who is from Ethiopia and claimed Taiwan was instigating racist attacks against him without evidence, has provided no substantive comment on the matter.

The W.H.O., on its Twitter account, called the Spiegel report false this weekend and claimed that Xi and Tedros had never spoken on the phone.

“Such inaccurate reports distract & detract from W.H.O.’s and [the world’s] efforts to end [the Chinese coronavirus pandemic],” the agency asserted.

Statement on False Allegations in @derspiegel: Reports of a 21 Jan phone call between @DrTedros & 🇳 President Xi are unfounded & untrue. They didn’t speak on 21 Jan & have never spoken by 📞
Such inaccurate reports distract & detract from WHO's & the 🌍’s efforts to end #COVID19

The Global Times, a Chinese government propaganda newspaper, reprinted the W.H.O.’s denial on Sunday with its own commentary from an in-house “expert” refuting the report.

“Groundless and false reports are also part of a disinformation campaign being waged against China by some Western media and politicians,” the Chinese “expert” claimed. “Such a campaign has been fueled by US-led anti-China sentiment and rhetoric which has been escalating in recent weeks as the pandemic continued worsening.”