Thousands of protesters assembled near Bangkok’s Democracy Monument on Saturday, demanding “the government restore full-fledged democracy to the people.” The rally lasted “for hours until midnight” and marked the largest protest since Thailand’s civil unrest in 2014 which “precipitated Prayuth’s coup d’etat,” according to the report.

As Thailand’s army chief in 2014, General Prayuth led a successful coup against the government, claiming “the military needed to restore order following a cycle of mass protests and violence.” Prayuth became prime minister and ushered in an era of junta-heavy government for Thailand that western nations have decried for its lack of democracy in recent years, Reuters detailed.

In addition to the capital, Bangkok, anti-government protests have sprouted up in the cities of Chiang Mai and Ubon Ratchathani. The pro-democracy rallies “are continuing to spread, with thousands expected to gather at the University of Mahasarakham on Wednesday” for another demonstration, Coconuts Bangkok noted.

Hong Kong pro-democracy activist Joshua Wong expressed his support for the Thai protesters on Sunday, tweeting praise “for the so-called #MilkTeaAlliance” which has united “Hong Kong, Taiwan, and Thailand in their fight against authoritarianism,” according to the report. 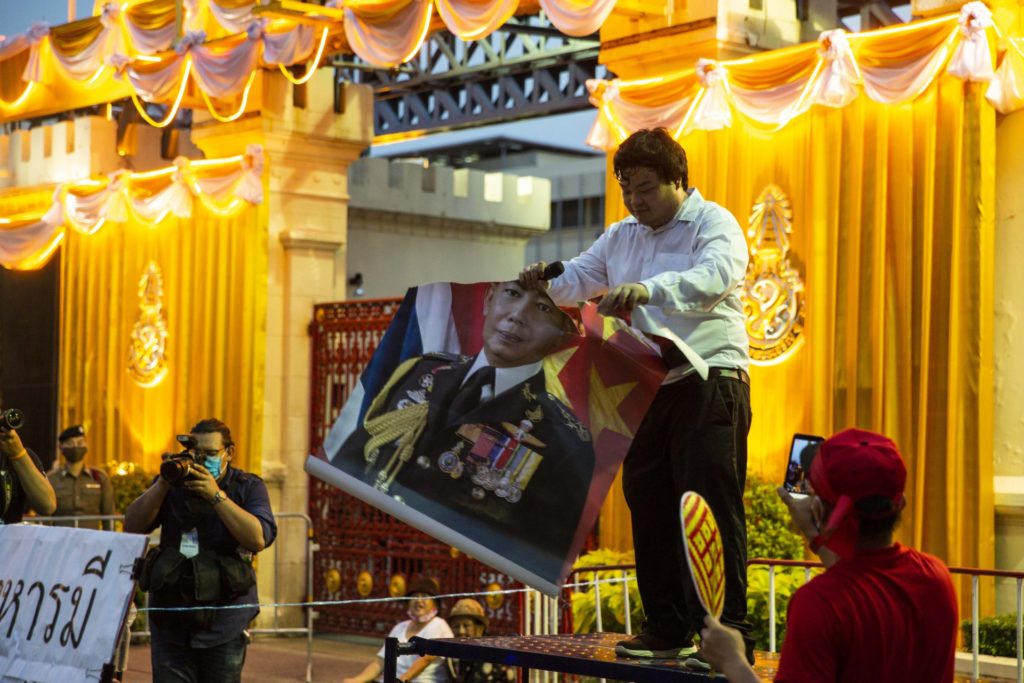 An anti government protester destroys a poster of the Royal Thai Army Commander-in-Chief Apirat Kongsompong during a demonstration in front of the Army Headquarters in Bangkok, Thailand. Beginning last weekend anti government demonstrations have been held throughout Thailand, calling for Prime Minister Prayut Chan-o-cha’s government to step down. (Lauren DeCicca/Getty Images)

“#Hongkongers will never forget how our Thai fellows stood with us against #China’s nationalist trolls during #nnevvy saga and spoke up for us amid #Beijing’s authoritarian suppression in #HK. #MilkTeaAlliance,” Wong wrote. “That is the shared destiny for youths worldwide amid democratic backlashes – We want our democracy back. We want our future back.”

In late March, Prime Minister Gen. Prayuth imposed a strict lockdown over Thailand through an emergency decree, ostensibly to control the spread of coronavirus.

“The emergency decree gives the government a range of additional powers including to deploy officials to investigate venues, bring in curfews, restrict gatherings, and control travel,” Reuters reported on June 29, when the Thai government extended the decree until the end of July.

Thailand’s pro-democracy activists criticize the emergency decree as government overreach. They view the edict as the government’s way of cracking down on political unrest, which was already brewing pre-pandemic.

“The [recent] protests are a resumption of those which began prior to the pandemic in the wake of the court-ordered dissolution of a popular reformist party,” Coconuts Bangkok reports.