North Korea claimed to have identified its first suspected Chinese coronavirus case on Sunday, a refugee who had fled the country three years ago and allegedly snuck back across the border last week.

While extremely rare, some of the thousands of North Koreans who risk their lives to escape arguably the world’s most repressive country do return home, many burdened by the shock of life in a free country. According to South Korean officials, 11 North Korean refugees returned home in the last five years, among them a 24-year-old believed to be the individual North Korea claims to be exhibiting coronavirus symptoms on its side of the border.

Despite being surrounded by some of the countries most critically affected by the Chinese coronavirus – including its origin country, China, and others like Russia and South Korea – the communist North Korean regime has insisted that it has not diagnosed a single case of Chinese coronavirus. South Korean media, citing sources within North Korea, have reported that the real number of coronavirus deaths there is about 500 among an untold number of cases.

North Korea reportedly placed its third-largest city, Chongjin, under a total lockdown in June, a bizarre move for a country that claimed zero coronavirus cases nationwide.

On Sunday, Kaesong – a border city best known as home to a failed industrial project with South Korea and a “joint liaison office” for inter-Korean diplomacy that Pyongyang blew up last month – reportedly also went until total lockdown.

The unnamed man at the center of North Korea’s alleged first coronavirus case returned to his birth country on July 19, according to North Korea’s state-run Pyongyang Times.

“The anti-epidemic authorities said with several medical tests of the secretion of the intruder’s upper airway and blood suggesting possibilities of infection,” the state propaganda outlet asserted. “[H]e was put under strict quarantine as a primary step and all the people in Kaesong City who had contacted him and those who had been to the city over the last five days are being thoroughly checked out, medically examined and quarantined, with the help of the relevant sector.”

State media reported that, following the identification of a potential coronavirus case, dictator Kim Jong-un organized an emergency meeting of his top-level officials to announce a maximum-level emergency in the country. At the meeting, Kim announced “that he took the preemptive measure of totally blocking Kaesong City and isolating each district and region from the other.” Kim announced a “top-class” emergency alert. 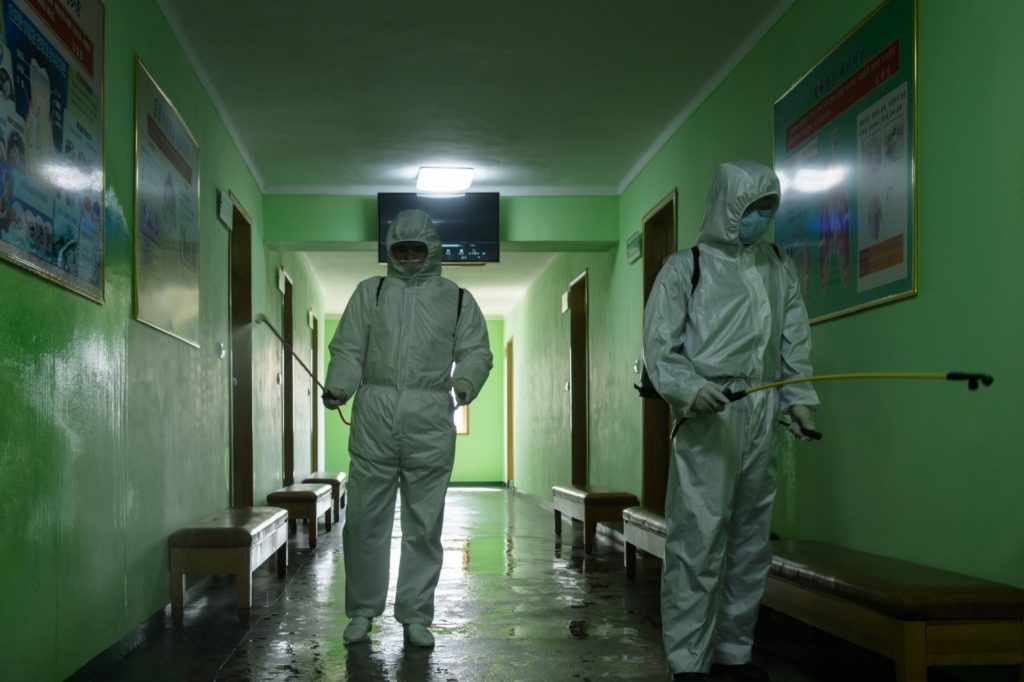 Health officials disinfect a corridor amid concerns over the COVID-19 coronavirus at the Pyongchon District People’s Hospital in Pyongyang on April 1, 2020. (KIM WON JIN/AFP via Getty Images)

“Saying that everyone needs to face up to the reality of emergency, he appealed to all to overcome the present epidemic crisis by not losing the focus of thinking and action, practicing responsibility and devotion to be faithful and true to the leadership of the Party Central Committee,” state media quoted Kim as saying.

Kim also reportedly scolded his officials for insufficiently strict border protection, given that the alleged coronavirus case crossed into the country illegally.

South Korean officials confirmed on Monday that a North Korean refugee had returned to the country recently. South Korea’s JoongAng Ilbo cited South Korean military officials as confirming that the man in question “probably swam through a drain to bypass barbed wire fences on the border, after being accused of raping a female fellow defector on June 12 at his residence in Gimpo, Gyeonggi.” The man reportedly denied charges to police but admitted he was too drunk to remember the details of his encounter with the accuser; he reportedly fled after police issued a warrant for his arrest.

South Korean news sources have only identified the man by the common last name “Kim.” The officials did not offer any evidence that the man in question had exhibited coronavirus symptoms before leaving the country.

The South Korean news agency Yonhap appeared to find some evidence verifying that the man North Korea claimed could be its first Chinese coronavirus carrier did indeed exist – a Youtube video on a channel run by North Korean refugees in which he tells the story of how he escaped the country. The story appeared to match what both North and South Korean media reported. The man in the video claimed to be from Kaesong and left after the Koreas shut down the joint industrial complex in the city.

“The first reason I decided to defect from the North was hardships of living … As the Kaesong Industrial Complex came to a halt, my trade became difficult and I had no hope,” the man reportedly said in the video. “I got through a high-voltage line and barbed-wire fences at the demarcation line before crossing a minefield … before hiding inside a reed field near the Han River for three hours.”

The man’s story is an uncommon one for North Korean defectors, many of which choose to travel through China to reach South Korea instead of attempting to cross directly and face the intense military presence at the Demilitarized Zone (DMZ).

The Kaesong Industrial Complex has long been a point of contention between the Koreas, even though it was built to improve ties between the two countries, technically at war with each other for 70 years. The Industrial Complex is an office and factory park meant to create jobs for North Koreans, where they would in theory work alongside South Korean citizens to help live together and exchange experiences.

It was also intended to help North Korea’s communist economy improve its destitute state. Both countries have agreed to open and close it repeatedly in the past decade, depending in large part on how aggressive the Kim regime has decided to be against the South; Kim Jong-un has historically operated more aggressively against conservative South Korean presidents.

Human Rights Watch accused both nations of abusing workers at the complex in 2015.

Conservative South Korean President Park Geun-hye decided to shut down the complex most recently in 2016, a move the United States supported. A year later, Kim’s regime announced that the park was running again, staffed exclusively by North Koreans. In the aftermath of the election of leftist current President Moon Jae-in, Kaesong went from hosting an industrial park for both Koreas to a “joint liaison office” housing a phone on which both sides would speak twice a day. The phone calls lasted two years before North Korea announced it had bombed the office out of existence last month.