Typhoon Hagupit made landfall in eastern China Tuesday as much of the nation’s interior continued to struggle with historic floods that, as of Tuesday, Beijing said had “affected” over 38 million people.

The floods have heavily affected the Yangtze River, one of the world’s largest spanning nearly 4,000 miles and boasting hundreds of tributaries. An estimated 433 of them were overflowing as of the end of July. Major metropolitan areas like Wuhan, Xi’an, and Yichang saw significant percentages of their area underwater.

Floodwaters have threatened 27 of China’s 31 provinces.

“A total of 56 people have died or are missing and over 38.2 million people have been affected due to floods in China in July, the Ministry of Emergency Management said on Tuesday,” according to China’s state-run CGTN broadcaster on Tuesday. “In July, the floods caused 2.996 million people to be evacuated for emergency resettlement, 27,000 houses to collapse and direct economic losses of 109.74 billion yuan.”

China’s reports on the number of affected people have conflicted with each other. China Daily claimed on Tuesday that the number of people affected nationwide was 54.8 million in July, citing the Ministry of Emergency Management. Last week, Chinese state media claimed the number of those affected was 24 million. The outlets have not offered specific definitions of what “affected” means – if people included are those evacuated or all who live in flooded areas.

The Japanese Nikkei Asian Review estimated on Monday that 55 million people are being affected.

In addition to destroying homes, the flooding has affected much of China’s industrial and agricultural output, shutting down factories and destroying fields full of lucrative crops like corn and soy beans.

As Hagupit only recently landed, meteorological authorities in China do not appear to have made public declarations on how it would affect flooded areas, though they appear to believe it will continue moving up the coast rather than entering the interior of the country. According to the Xinhua state-run news agency, the typhoon landed in Zhejiang province in the central area of the Chinese east coast and is moving northward, expected to hit Beijing and, later, the Korean Peninsula. 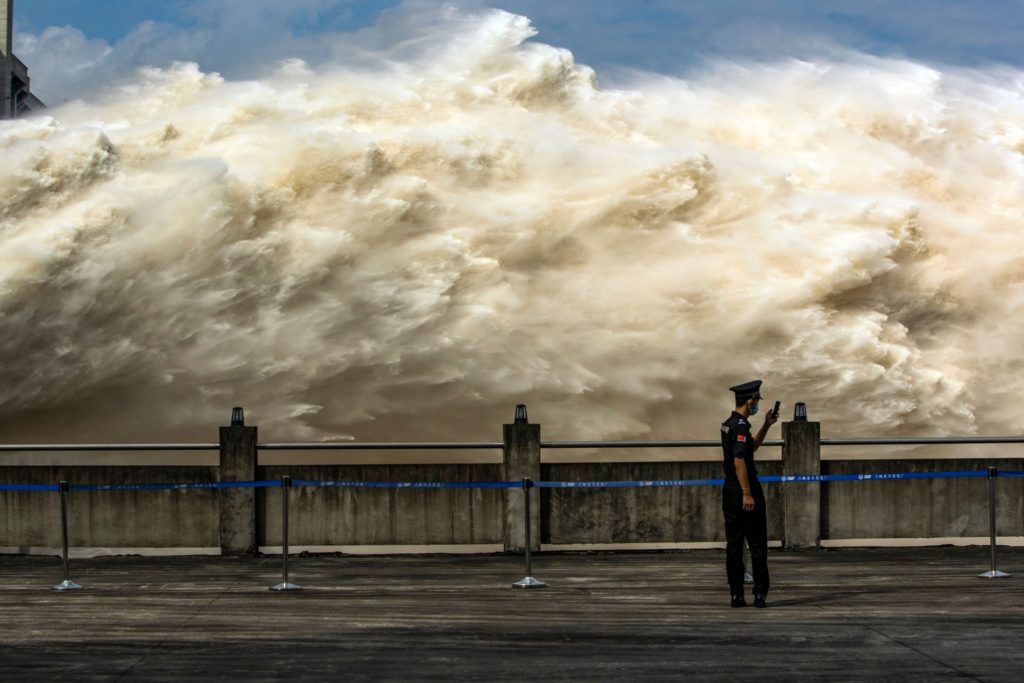 This photo taken on July 19, 2020 shows a security guard looking at his smartphone while water is released from the Three Gorges Dam, a gigantic hydropower project on the Yangtze river, to relieve flood pressure in Yichang, central China’s Hubei province. – Rising waters across central and eastern China have left over 140 people dead or missing, and floods have affected almost 24 million since the start of July, according to the ministry of emergency management. (STR/AFP via Getty Images)

“It brought torrential rains to Zhejiang and Fujian provinces, with gales forecast in areas in the western and southern parts of the East China Sea, the waters near Diaoyu Island, the Yangtze River Estuary, Hangzhou Bay, as well as the coastal areas of Zhejiang and northeastern Fujian,” Xinhua noted.

Authorities have warned that Hagupit, the fourth typhoon to hit China this year, may be the first of two or three of its kind to hit China in August alone, which Nikkei noted was a significantly higher number than in typical years.

China Daily applauded Chinese authorities on Tuesday for an alleged decrease in the number of fatalities during this flood season and less reported property destruction as a product of building more flood-resistant buildings.

“Despite southern China being soaked in the past two months by the second-highest amount of precipitation since 1961, the country has experienced a vast decrease in the number of fatalities in floods so far this rainy season thanks to the government’s efforts in ramping up flood mitigation,” the propaganda newspaper claimed, citing a Communist Party official.

China Daily admitted in a story two weeks ago, however, that many of those evacuated had to leave their communities not because of the natural effects of the rainfall, but because Communist Party officials were continuously opening floodgates to protect the infrastructure along affected rivers.

In the article, titled “Villagers Make Sacrifice as Floodwaters Rush In,” China Daily reported that officials decided to open 13 sluice gates along the Huaihe River in late July, sending water flooding directly into four towns “home to about 195,000 people.” The area, the report noted, has been deliberately flooded 16 times in the past century.

“Minor inconveniences have been experienced by some residents whose villages have become islands,” China Daily shrugged.

“China has entered a crucial period of flood control, Xi said, calling for Party committees and governments at all levels to take responsibilities and go into the frontline to guide flood control work,” Xinhua relayed at the time.

Xi has made several public appearances since then but not mentioned the floods. On Tuesday morning, Xinhua’s English-language front page boasted a speech Xi Jinping delivered last week about boosting China’s military capability.