Philippine Defense Secretary Delfin Lorenzana said on Sunday that Bejing’s “nine-dash line” – used to illegally claim nearly all of the South China Sea – is a figment of the Chinese Communist Party’s imagination.

“That area is within our EEZ [exclusive economic zone],” Lorenzana told reporters in a text message sent late Sunday, Agence France-Presse (AFP) reported Monday. “Their [China’s] so-called historical rights over an area enclosed by their 9-[dash] line doesn’t exist [sic] except in their imaginations.”

“Our fishermen are within our EEZ and likewise our ships and planes conduct patrol sorties within our area,” Lorenzana continued. “They [China] are the ones who have been doing provocations by illegally occupying some features within our EEZ. Hence they have no right to claim they are enforcing their laws.”

The nine-dash line refers to an unofficial map Beijing uses in an attempt to support its illegal claims to nearly all of the South China Sea. On the map, Beijing draws nine dashes around the South China Sea supposedly delineating Beijing’s territory within the body of water. 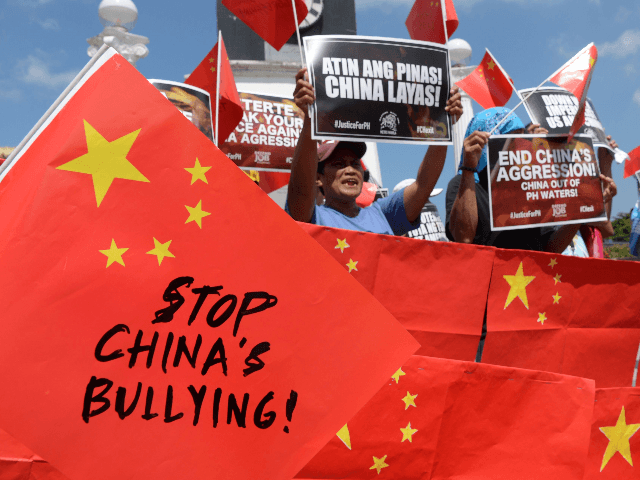 Activists display anti-China placards and flags during a protest at a park in Manila on June 18, 2019, after a Chinese vessel last week collided with a Philippine fishing boat which sank in the disputed South China Sea and sailed away sparking outrage. (TED ALJIBE/AFP/Getty Images)

The dashes are drawn so that they enclose practically the entire sea, which Beijing illegally claims as its historical right. The claims within the line violate the sovereignty of Taiwan, Brunei, Malaysia, Vietnam, and the Philippines.

“It is beyond reproach for China Coast Guard to conduct law enforcement in Huangyan Dao [China’s name for Scarborough Shoal] waters as it is a lawful practice,” Zhao said.

Scarborough Shoal is one of the South China Sea’s richest fishing grounds. It is located 149 miles west of the Philippines’ main island of Luzon, home to Manila, and 404 miles from the nearest Chinese landmass, Hainan, a southern island province of China.

In 2012, Beijing seized Scarborough Shoal from the Philippines following a tense South China Sea stand-off. The Philippines brought its disputes over the seizure to international arbitration in 2013. The international tribunal ruled in 2016 that Beijing’s claims to practically the entire South China Sea were illegal. Beijing refuses to accept the ruling as legitimate and continues to encroach upon other nations’ sovereign territory within the body of water.

The South China Sea is strategically located along global shipping routes and is rich with natural resources. China and other nations surrounding the sea – the Philippines, Vietnam, Malaysia, Brunei, and Taiwan – compete for territory in the highly coveted maritime region.