The Indian Ministry of Foreign Affairs issued a statement Wednesday condemning “personal attacks” against French President Emmanuel Macron for taking measures to curb radical Islamic violence in the face of the beheading of a schoolteacher this month.

New Delhi also condemned the beheading and terrorism generally, without blaming Macron or the French people for any of the violence – a contrast to statements from leaders of Muslim nations that have nearly universally condemned Macron for asserting that his nation would not censor itself to spare the feelings of radical Muslims.

A teen jihadist beheaded Samuel Paty, a French schoolteacher, in the suburbs of Paris on October 16 after Paty held a class on freedom of expression in which he displayed cartoons of Muhammad, the Islamic prophet. Parents of some of the students reportedly demanded a fatwa, or religious edict, against Paty at their local mosque, resulting in his death. 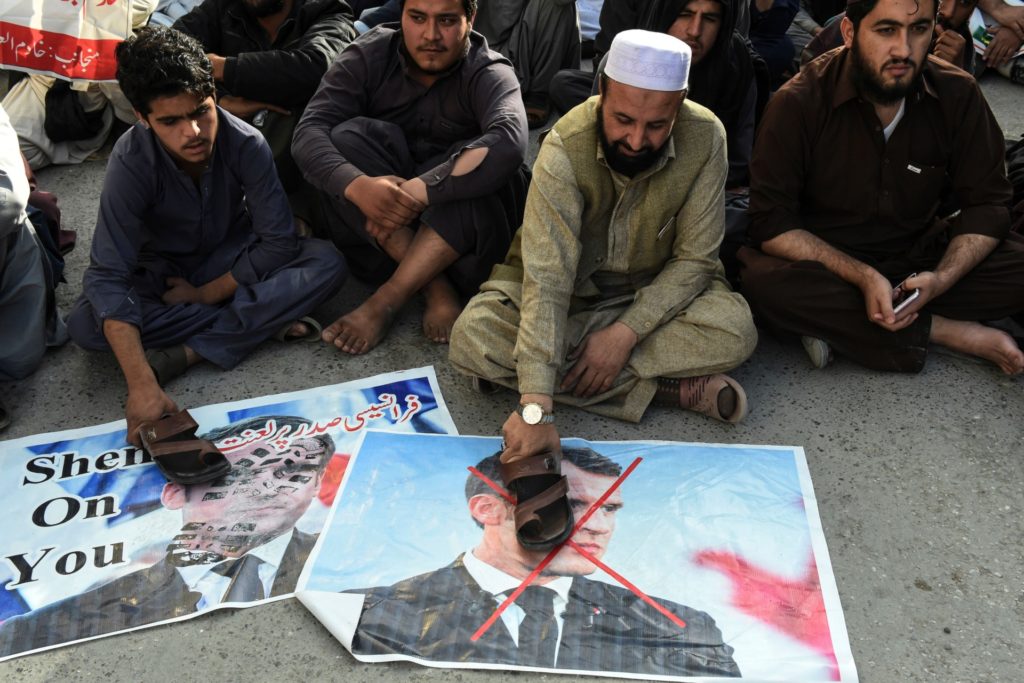 Muslims demonstrators put slippers over posters with the picture of French President Emmanuel Macron during a protest following Macron’s comments over the Prophet Mohammed caricatures, in Quetta on October 29, 2020. (BANARAS KHAN/AFP via Getty Images)

In response, the governments of Egypt, Pakistan, Turkey, Saudi Arabia, and Iran, as well as lawmakers and public figures in several other Muslim countries, have condemned Macron and the French government for acting to crack down on radical jihadist groups.

The day after India came to France’s diplomatic defense, France experienced a wave of jihadist attacks that has yet to abate at press time.

“We strongly deplore the personal attacks in unacceptable language on President Emmanuel Macron in violation of the most basic standards of international discourse,” the Indian Ministry of Foreign Affairs said in its statement. “We also condemn the brutal terrorist attack that took the life of a French teacher in a gruesome manner that has shocked the world. We offer our condolences to his family and the people of France.”

“There is no justification for terrorism for any reason or under any circumstance,” the statement concluded.

Indian Prime Minister Narendra Modi responded to the attacks in France on Thursday in a statement on Twitter, citing in particular the deadliest attack – a knife attack, including partial beheading, at a church in Nice.

I strongly condemn the recent terrorist attacks in France, including today's heinous attack in Nice inside a church. Our deepest and heartfelt condolences to the families of the victims and the people of France. India stands with France in the fight against terrorism.

India’s Foreign Secretary Harsh V. Shringla traveled to Paris on Thursday to meet his counterpart and other top French diplomats. According to the Indian embassy in Paris, the meeting is in part to expand relations with “a key strategic partner.”

France has received similar messages of support from outside the Muslim world in the wake of the killing of Paty.

“On behalf of the United States, I’d like to extend my sincere, really sincere condolences to a friend of mine, President Macron of France, where they just … had a vicious, vicious, Islamic terrorist attack, beheading an innocent teacher near Paris,” President Donald Trump said during a rally last week. “France is having a hard time, and Macron’s a great guy, and I just want to say, whatever we can do.”

On Thursday, the Kremlin revealed that Russian President Vladimir Putin had sent a message to Macron in the aftermath of the latest jihadist attack wave, offering to help.

“A cynical and brutal crime committed in a church is particularly outrageous. We once again saw that terrorists don’t share human moral values. Clearly, the fight against international terrorism requires practical steps to pool the efforts of the entire international community,” the Kremlin press service said, according to the Russian news agency TASS.

Putin reportedly “reiterated Russia’s readiness to boost close cooperation with its partners in France and other countries in all areas related to counterterrorism.”

In contrast, the messages from Muslim leaders have urged French people not to engage in any expression that runs the risk of offending any Muslim person, whether in France or abroad.

“We also have rights. We have the right for our feelings not to be hurt and for our values not to be hurt. And if some have the freedom to express what is in their thoughts I imagine that this stops when it comes to offending the feelings of more than 1.5 billion people,” Egyptian President Abdel Fattah al-Sisi, who came into power in a coup against the Muslim Brotherhood, said on Wednesday.

“Muslims have a right to be angry and to kill millions of French people for the massacres of the past,” Mahathir Mohamad, the prime minister of Malaysia until March of this year, said on Twitter Thursday, also complaining that Western swimsuits were too small for women to wear in public.

“Since you have blamed all Muslims and the Muslims’ religion for what was done by one angry person, the Muslims have a right to punish the French. The boycott cannot compensate the wrongs committed by the French all these years,” he continued.

The Prime Minister of Pakistan Imran Khan, who has publicly supported globally enforced laws against blasphemy, accused Macron of “deliberately provoking Muslims” by asserting that France “will not give up [its] cartoons” to appease jihadists.

“This is a time when President Macron could have put a healing touch and denied space to extremists rather than creating further polarization and marginalization that inevitably leads to radicalization,” Khan claimed.