French police “neutralised” and arrested a man Thursday morning after a knife attack inside a church in the city of Nice which left at least three dead and several injured.

It has been a busy day for the French security services. Beyond the church attack in Nice, the gunman in Avignon, and the stabbing at the French consulate, there have also been two other foiled attacks in Paris and Lyon. Read the full story at Breitbart London.

Update 1600 GMT — Alleged attacker is a recent migrant from Tunisia

France’s Le Figaro now reports the alleged attacker now in custody for killing three in Nice’s Notre Dame church on Thursday morning is a 21-year-old migrant from Tunisia. Said to have arrived in France only this month, after crossing the Mediterranean, the report states the migrant came to Europe by way of the island of Lampedusa.

That fact is potentially of political importance — Lampedusa is an Italian island and has been a major waypoint for migrants coming to Europe from North Africa. Landings on Lampedusa have recently surged, and Italian populist heavyweight Matteo Salvini has called for the Italian interior minister to step down if it is indeed proven the illegal did come through the island.

Several world leaders have expressed thoughts and prayers for the victims of the attack including British Prime Minister Boris Johnson who wrote in English and in French, “I am appalled to hear the news from Nice this morning of a barbaric attack at the Notre-Dame Basilica. Our thoughts are with the victims and their families, and the UK stands steadfastly with France against terror and intolerance.”

German Chancellor Angela Merkel made similar comments stating that she was, “deeply shaken by the terrible murders in a church in Nice,” and added, “The French nation has Germany’s solidarity in these difficult hours.”

The Turkish government, which has been at odds with France in recent weeks, also expressed solidarity. Ibrahim Kalin, spokesman for Turkish President Recep Tayyip Erdogan stated, “We will fight all kinds of terror and extremism with determination and in solidarity.”

Erdogan has also called for a boycott of French goods and threatened legal action after the satirical magazine Charlie Hebdo published a cartoon lampooning him this week.

Of the three dead in Thursday’s Nice attack, two victims were women and one was a man. One of those women, we now know was killed next to the font of the Notre Dame church, French media reporting she was nearly completely beheaded — a development from earlier reports that stated a throat had been “cut”. The man who died was also killed inside the church was a server or sacristan.

Another woman who was stabbed several times managed to escape the church but succumbed to her injuries outside. French media is now widely reporting that the attacker did shout “Allah akbar” as he struck, in line with the earlier comments of the mayor of Nice.

A second, separate incident has taken place in the French city of Avignon. Police shot dead an “Allah Akbar” shouting gunman during an exchange of fire, but there have been no other reported injuries. Police have not yet declared the incident a terror attack.

In a third incident today, a knifeman was arrested outside the French consulate in Saudi Arabia after he attempted to attack a guard there. The guard was stabbed with a “sharp tool” and was taken to hospital. France has condemned the attack and has called on Saudi Arabia to “shed light” on the circumstances surrounding the stabbing. 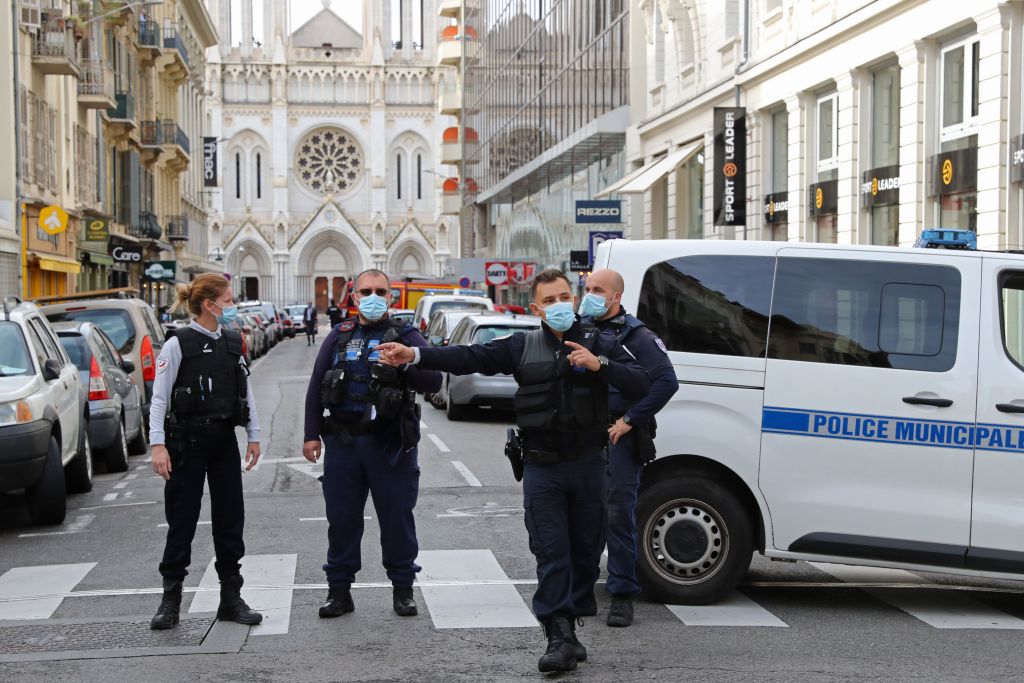 French policemen stand guard the street leading to the Basilica of Notre-Dame de Nice after a knife attack in Nice on October 29, 2020. – France’s national anti-terror prosecutors said Thursday they have opened a murder inquiry after a man killed three people at a basilica in central Nice and wounded several others. The city’s mayor, Christian Estrosi, told journalists at the scene that the assailant, detained shortly afterwards by police, “kept repeating ‘Allahu Akbar’ (God is Greater) even while under medication.” He added that President Emmanuel Macron would be arriving shortly in Nice. (Photo by Valery HACHE / AFP) 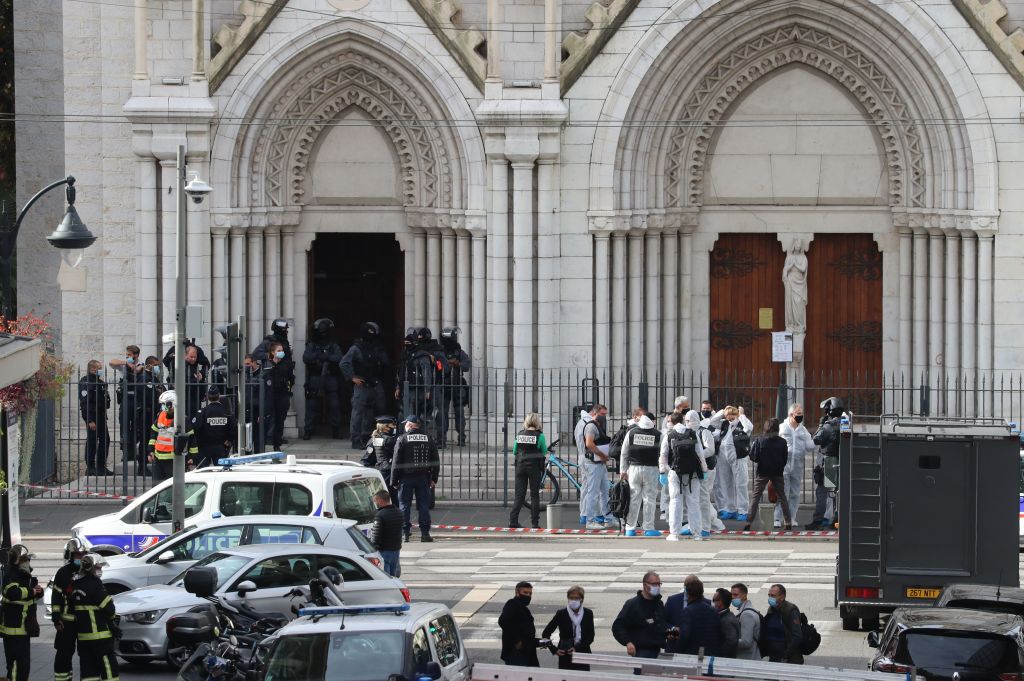 French members of the elite tactical police unit RAID enter to search the Basilica of Notre-Dame de Nice as forensics officers wait after a knife attack in Nice on October 29, 2020.(Photo by VALERY HACHE/AFP via Getty Images) 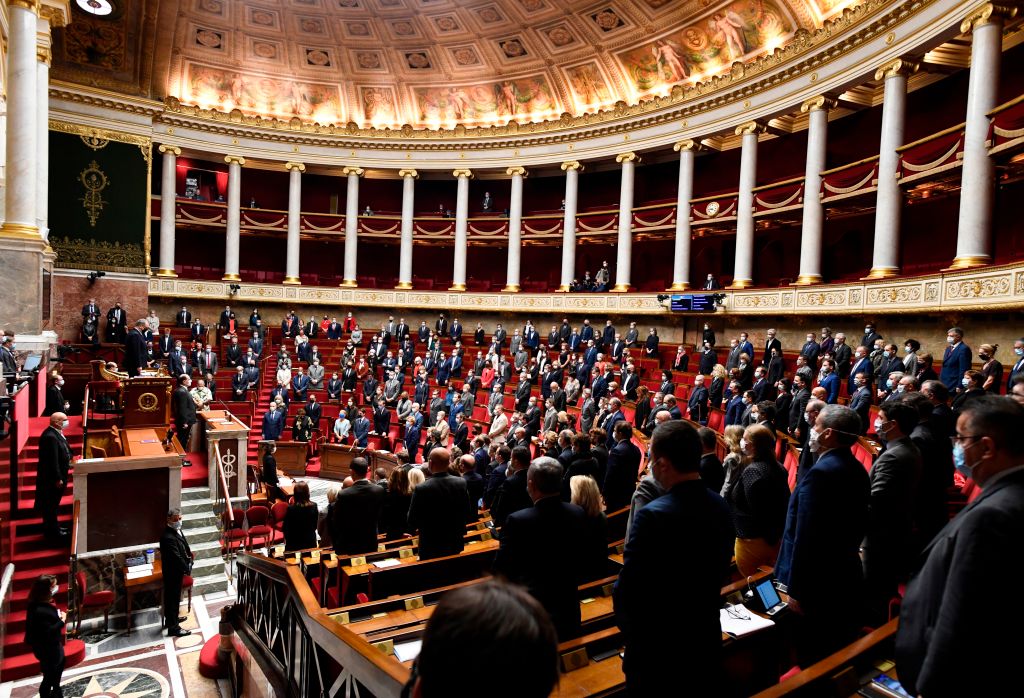 President of the National Assembly Richard Ferrand (L, behind the upper desk), French Prime Minister Jean Castex (2nd L, behind the lower desk) and the MP’s observe a minute’s silence in tribute to the victims of a knife attack in Nice, before Castex’s speech at the National Assembly ahead of the MPs’s vote on the measures taken to curb the spread of the Covid-19 caused by the novel coronavirus, at the Palais Bourbon in Paris on October 29, 2020 (Photo by BERTRAND GUAY/AFP via Getty Images) 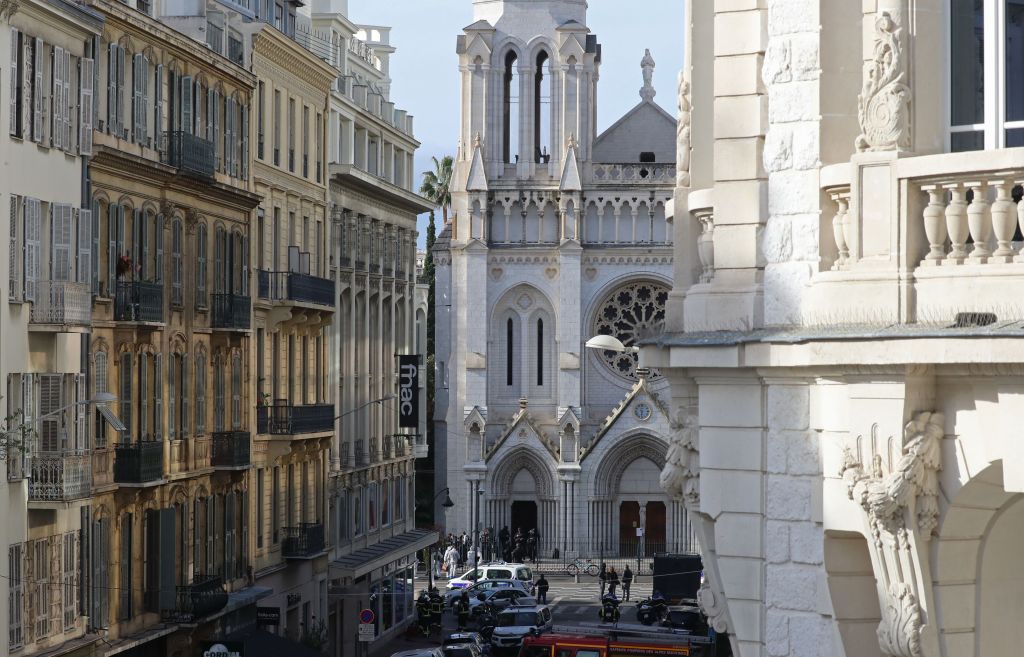 French members of the elite tactical police unit RAID enter to search the Basilica of Notre-Dame de Nice after a knife attack in Nice on October 29, 2020. (Photo by VALERY HACHE/AFP via Getty Images)

The mayor of Nice did not mince his words when he spoke to the television cameras Thursday morning, reports local newspaper Nice Matin, revealing that the attacker “would not stop repeating ‘Allahu akbar’ while he was injured”.

Declaring that “enough is enough”, mayor Christian Estrosi said Nice was “paying too heavy a price by once again being victims of Islamo-fascism”.

By once again, the city mayor was almost certainly referring to the 2016 Nice attack, in which an Islamist terrorist drove a high-powered delivery truck through crowds of revellers celebrating France’s national day, killing 86 people along the beachfront.

Today’s attack also comes in the context of intensified Islamist activity in France in recent weeks. Less than two weeks ago, a French history teacher was beheaded in front of his own school after he showed cartoons of Mohammed to his class to illustrate a talk on freedom of expression. The French government reacted to the killing with unusual determination, closing a local mosque that had agitated against the victim before he was killed, and arresting dozens who celebrated the attack.

These actions have not gone down well with some in the Muslim world, however, with France’s response to Islamist murders and terror attacks starting a war of words between the nation and Muslim majority countries Turkey and Pakistan, as well as Palestinian leaders.

A mass stabbing in the southern French city of Nice was declared a terror attack on Thursday, after an unidentified assailant killed three — two women and a man — and wounded several others inside the city’s Notre Dame church around 0900 hours, Western European Time (0400 EST).

The exact number of injured is unknown, but among them is the attacker themself, who was taken to hospital while under arrest, presumably having been injured during the arrest.

Within an hour of the attack taking place, French national police urged locals to not be alarmed by the sound of explosions, as a bomb disposal unit was working to clear the area. This does not necessarily imply the attacker had left a bomb, however, as it is standard police practice to clear the area of an attack of all suspicious items as a precaution. 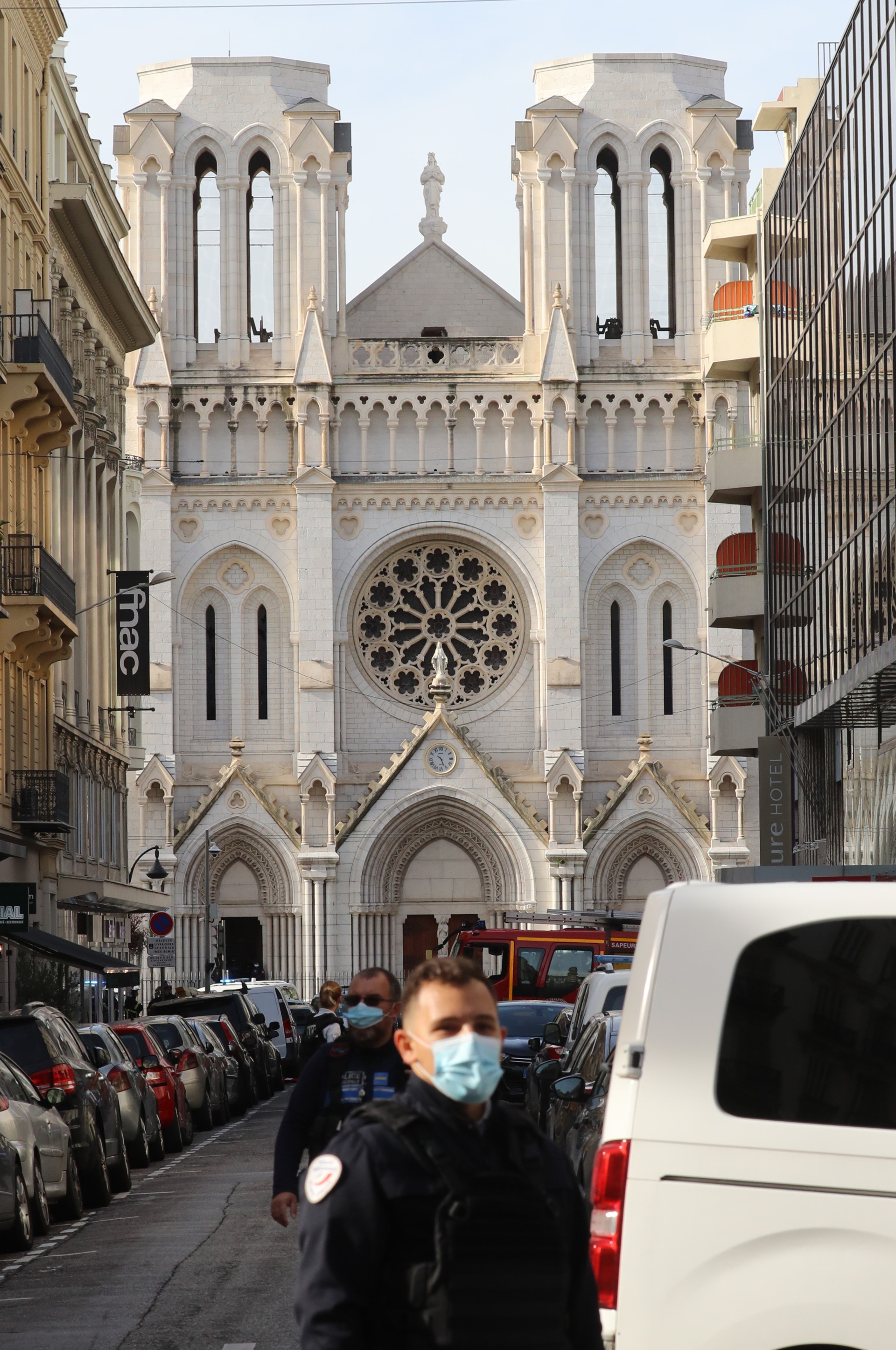 French policemen stand guard a street in front of the Basilica of Notre-Dame de Nice after a knife attack in Nice on October 29, 2020. – A man wielding a knife outside a church in the southern French city of Nice slit the throat of one person, leaving another dead and injured several others in an attack on Thursday morning, officials said. The suspected assailant was detained shortly afterwards, a police source said, while interior minister Gerald Darmanin said on Twitter that he had called a crisis meeting after the attack. (Photo by Valery HACHE / AFP)