Turkey reportedly canceled its plans to provide security at Kabul airport after Western forces withdraw from Afghanistan but is willing to provide security and technical support “if the Taliban request it,” two Turkish government sources told Reuters anonymously Monday.

“At the point reached, there is total chaos at Kabul airport. Order has been completely disrupted,” one of the sources said. “At this stage, the process of Turkish soldiers taking up control of the airport has automatically been dropped.”

Kabul airport was in a state of “total chaos” on Monday after the Taliban seized control of Kabul, Afghanistan’s national capital and seat of government, on Sunday. The airport, officially the Hamid Karzai International Airport, is located five miles outside of Kabul’s city center. The facility also serves as one of Afghanistan’s largest military bases and is surrounded by other bases used by both U.S. and NATO-allied troops.

The Western forces have largely withdrawn from the country over the past few months as part of a planned troop exit to end a nearly 20-year-long military operation based in Kabul. The U.S. launched the Afghan War in autumn 2001, ousting the Taliban from Afghanistan’s government. The jihadist group capitalized on President Joe Biden breaking an agreement to withdraw troops by May, retaking Afghanistan’s strategic and symbolic capital, Kabul, in less than ten days. 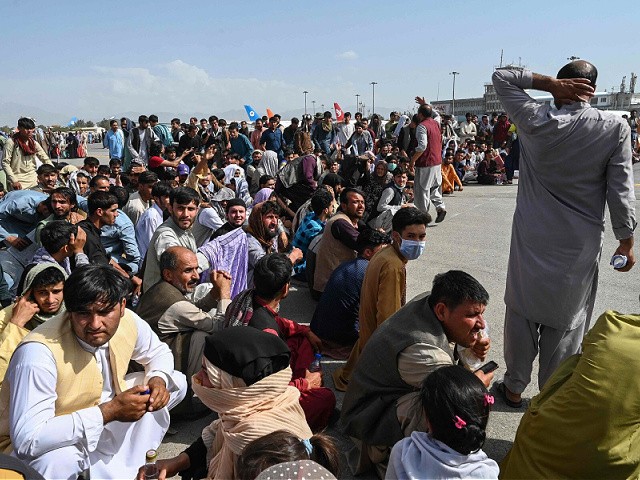 TOPSHOT – Afghan passengers sit as they wait to leave the Kabul airport in Kabul on August 16, 2021, after a stunningly swift end to Afghanistan’s 20-year war, as thousands of people mobbed the city’s airport trying to flee the group’s feared hardline brand of Islamist rule. (Photo by Wakil Kohsar / AFP) (Photo by WAKIL KOHSAR/AFP via Getty Images)

“Turkey, which has 600 troops in Afghanistan, had offered to keep them in Kabul to guard and operate the airport after other NATO members pulled out, and was discussing details with Washington and the government of [Afghan] President Ashraf Ghani,” Reuters noted Monday. “The plans were thrown into disarray over the past two days after Ghani fled the country on Sunday as the Taliban swept in to Kabul and thousands of Afghans, also hoping to escape, thronged the airport on Monday.”

The Taliban issued a statement in mid-July condemning Turkey’s plans to offer security support for Kabul airport after August 31, which was the stated deadline for the U.S. and NATO troop withdrawal from Afghanistan.

“We strongly urge Turkish officials to reverse their decision due to it being detrimental for both countries,” the statement read.

“[If Turkish troops] continue the occupation of our country, the Islamic Emirate (Taliban) and the Afghan nation — in line with their religious, conscientious and patriotic duty — will take a stand against them,” the statement warned.

“Ankara had viewed the airport mission as a potential area of cooperation that could help heal frayed ties with Washington and other NATO allies, which have been strained over several issues,” Reuters noted Monday.

Turkey is one of two NATO member states with a majority Muslim population, along with Albania. The country is majority Sunni Muslim, like Afghanistan. Turkish President Recep Tayyip Erdoğan leads Turkey’s Islamist ruling party, the Justice and Development (AKP) party. Erdoğan offered to meet with the Taliban, an Islamist group, last week to help mediate the current security crisis in Afghanistan.

“Turkey’s relevant institutions are currently working until we have some talks with the Taliban. Maybe even I can be in a position to receive the person who will be their leader,” Erdoğan said on August 11 during a joint TV interview broadcast live on the Turkish news channels CNN Turk and Kanal D.