Traumatized survivors of Thursday’s suicide bombings at Kabul’s international airport have begun sharing their experience with international media, describing horrific scenes of scores of corpses and flying body parts in the aftermath of the explosion.

The Islamic State took responsibility for two bombings at Hamid Karzai International Airport, apparently targeting a mass of thousands of people who had congregated around the outside of the airport desperately attempting to flee the country. The crowds began amassing immediately following the Taliban terrorist organization’s seizure of the country on August 15.

Taliban jihadists, now the de facto government of Afghanistan, urged Afghans not to leave the country, then formally banned Afghans from the airport on Tuesday. Taliban spokesman Zabihullah Mujahid issued a statement “strongly” condemning the bombings and claiming Taliban jihadists would ensure justice for the dead.

As of Friday morning, the death toll stood at over 100 people, including at least 13 American members of the armed forces. Casualty counts generally remain unclear. The high death rate appears to be a result of how densely populated the area where the bombing occurred happened – in a sewage deposit area close to the outside of the airport where Afghans attempting to avoid Taliban checkpoints had congregated. 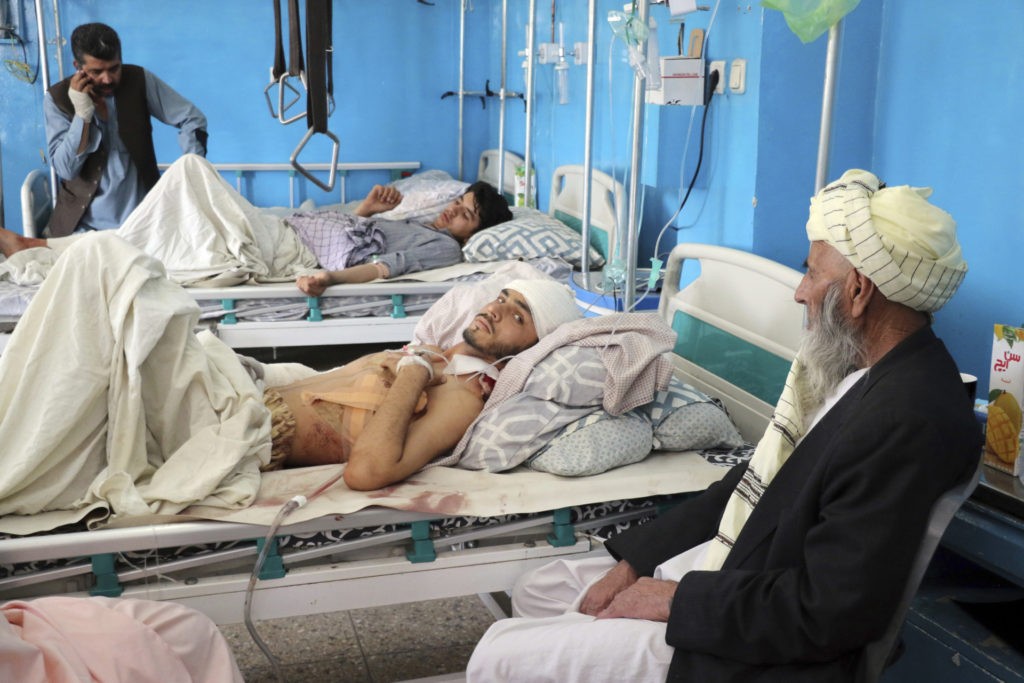 Afghans lie on beds at a hospital after they were wounded in the deadly attacks outside the airport in Kabul, Afghanistan, Friday, Aug. 27, 2021. (AP Photo/Wali Sabawoon)

“It was as if someone pulled the ground from under my feet; for a moment I thought my eardrums were blasted and I lost my sense of hearing,” an unnamed eyewitness told Reuters. The man said he had been in the area for about ten hours before the explosion attempting to board a foreign evacuation flight.

“I saw bodies and body parts flying in the air like a tornado taking plastic bags … into the air,” the man narrated. “I saw bodies, body parts, elderly and injured men, women and children scattered in the blast site.”

The witness described the scene as “doomsday” and noted that, by Friday, attempts to clear the significant amount of human remains had stalled because “there was no one to handle the issue and move the bodies.”

“Dead bodies and wounded were lying in the road and in the sewage canal. The little water flowing into it had turned into blood,” the witness said.

Another witness speaking to the Washington Post on Thursday described seeing people “burning alive” who were within close proximity of the bomb.

“Dead people were everywhere,” another witness told the newspaper. “I saw a woman in blood, wrapped up in a blanket covered in blood.”

Another witness – all appeared to speak anonymously for fear that Taliban jihadists would target them, as they were attempting to enter the airport after the terrorist organization commanded Afghans not to – blamed the Taliban itself for part of the chaos. Taliban jihadists were fully in charge of security at the airport at the time, as the Turkish government, previously tasked with the job, had abandoned the Kabul airport a day earlier.

“The Taliban then started firing in the air to disperse the crowd,” a witness identified only as “Milad” told Agence France-Presse (AFP), referring to the moments immediately after the first explosion. “I saw a man rushing with an injured baby in his hands.”

Early images from the scene surfacing on Thursday showed Afghan civilians using wheelbarrows to cart around some of the victims, covered in blood and clearly incapable of walking. Vans and other vehicles clearly not designated for emergency use surrounded Emergency Hospital in Kabul, flooding the already overwhelmed hospital with bombing victims, many already in critical condition.

Video: Casualties from bombing attacks at the Kabul airport have been transferred to Emergency Hospital. Reuters quoted a Taliban official saying at least 13 people have been killed. The US Pentagon is reporting at least 2 blasts, one near Abbey Gate & the other near Baron Hotel. pic.twitter.com/vgs7pudEcA

The head of Emergency, an NGO that offers medical attention in war-torn areas, told NPR on Thursday that the group’s hospitals were already about 80 percent full before being flooded with patients. Adding to the chaos are desperate relatives seeking information about their loved ones while the hospital struggles not just to treat, but to identify the victims.

“It’s very difficult because there’s a lot of confusion around. There are also a lot of people knocking at the door of the hospital to ask if one of their relatives is there, is among the patients because everybody was scattered around,” Rossella Miccio explained. “[T]hey are mainly coming from the airport – women, children with also very complicated and severe injuries, multiple traumas because the shells of the explosion hit limbs but also the belly, the chest.”

The latest estimates place the current death count at press time at 108 people: 95 Afghans and 13 American military personnel, according to multiple international news agencies citing “Afghan officials.” The agencies did not clarify if the Afghan officials are Taliban representatives, given that the Taliban are the only thing close to a functional government currently active in Afghanistan. Those providing the tolls suggest the casualties are almost certainly much higher given how much work remains to be done in digging bodies out of the sewer trench where the bombing occurred.