Russia considers the island of Taiwan to be a “part of China,” Russian Foreign Minister Sergei Lavrov said Tuesday, adding that Moscow’s foreign policy pivots on this premise.

Russia’s Interfax news agency asked Lavrov to express the Kremlin’s opinion “about the actions of China, which has recently resumed its attempts to reunite with Taiwan” at an October 12 press briefing in the Kazakh capital Nur-Sultan. Interfax further asked Lavrov if Moscow viewed China’s actions as “a threat to regional security.”

Just like the overwhelming majority of other countries, Russia views Taiwan as part of the People’s Republic of China. This is the premise we proceed from and will continue to proceed from in our policy.

Tuesday’s press conference took place in Nur-Sultan as Lavrov was in the city for a short, one-day visit to Kazakhstan. The Central Asian country borders both Russia and China.

Beijing considers Taiwan a “renegade” province of China and has repeatedly vowed to “reunify” the island with its mainland, most recently on October 9. Taiwan, which is located off China’s southeastern coast in East Asia, considers itself to be a sovereign nation. The island has its own democratically elected government and military and source of independent wealth, as it is the world’s top manufacturer of microchips. 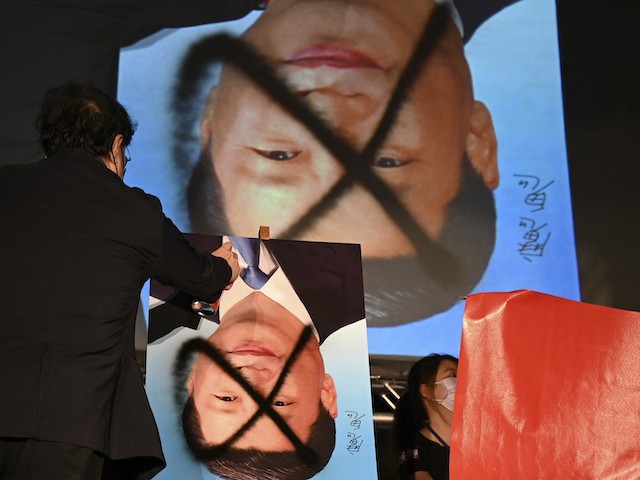 A demonstrator sprats paint over an upsidedown portrait of Chinese leader Xi Jinping during an anti-China rally outside the parliament in Taipei on October 1, 2021. (Sam Yeh/AFP via Getty Images)

Despite Taiwan’s hallmarks of sovereignty, Beijing insists the island rightfully belongs to China. The country’s ruling Communist Party has increasingly demonstrated belligerent actions towards Taiwan in recent months to intimidate the island, including the ordering of incessant military flyovers that penetrate Taiwan’s airspace.

China has successfully coerced most of the international community into steering clear of formal diplomatic relations with Taiwan. Today, just 14 countries, along with the Vatican, maintain diplomatic ties with the island.

“Even the U.S. maintains only informal relations with the island nation since recognizing Beijing in 1979, three decades after the Communist victory in a civil war drove nationalists into exile across the Taiwan Strait,” Newsweek observed on October 12. “The Soviet Union quickly sided with the new fellow Communist power, though Moscow and Beijing would soon develop their own feud that lasted the remainder of the Cold War.”

Russia’s declaration on Tuesday that Taiwan is “a part of China” appears to be the latest indication that Moscow seeks to more closely align itself with Beijing.

“[T]oday, China and Russia are closer than ever, and this year celebrated the 20th anniversary of their 2001 Treaty of Good-Neighborliness and Friendly Cooperation that redefined their relationship,” Newsweek noted on Tuesday.

“These ties have grown especially warm in recent years as both found common ground in countering a mutual rival: the United States,” according to the U.S.-based news magazine.