“We will seriously take the Philippines claims to the United Nations,” the politician, who served as Manila’s mayor from 1998 to 2007, said.

“The claims and counterclaims are there. That is where we should show our decisiveness, our knowledge, or courage,” the vice-presidential hopeful added.

Atienza used the term “West Philippine Sea,” which is Manila’s name for the section of the South China Sea immediately west of the Philippine archipelago. The West Philippine Sea contains Manila’s Exclusive Economic Zone (EEZ), which is a section of maritime territory in which a country holds sovereign rights to fishing, natural resource exploration, and other activities. China routinely encroaches on the Philippines’ EEZ and has ramped up this behavior in recent months. 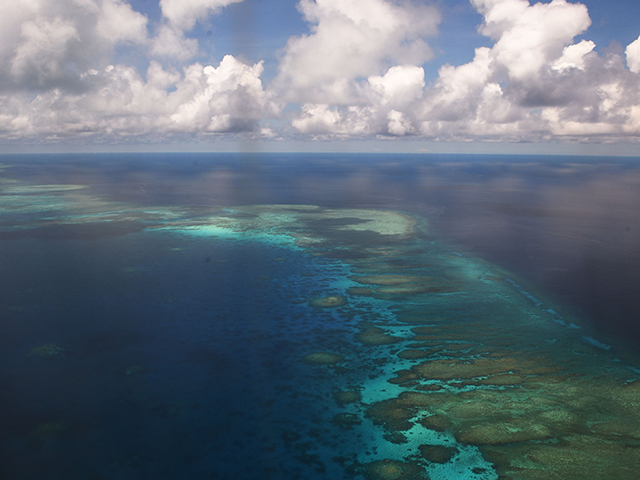 This photo taken on April 21, 2017, shows an aerial shot of part of mischief reef in the disputed Spratly Islands. Philippine Defence Secretary Delfin Lorenzana flew to a disputed South China Sea island on April 21, brushing off a challenge by the Chinese military while asserting Manila’s territorial claim to the strategic region.(Photo credit should read TED ALJIBE/AFP via Getty Images)

Beijing illegally claims Philippine shoals and islets as its own territory by citing its “nine-dash-line” map, which is an imaginary outline encompassing nearly 90 percent of the South China Sea. An independent arbitral tribunal established under the U.N. Convention on the Law of the Sea (UNCLOS) declared the map unlawful in 2016. China rejected the ruling and continues to claim the South China Sea almost in its entirety.

Philippine President Rodrigo Duterte said Manila “firmly rejects” Beijing’s attempts to “undermine” international law by violating its EEZ and those of other nations bordering the South China Sea in September 2020 in a virtual speech delivered at the 75th annual U.N. General Assembly.

“We must remain mindful of our obligation and commitment to the charter of the United Nations,” Duterte said.

“And as is amplified by the 1982 Manila declaration on the peaceful settlement of international disputes, the Philippines affirms that commitment in the South China Sea in accordance with UNCLOS and the 2016 arbitral award,” the president continued.

“The award is now part of international law. Beyond compromise and beyond the reach of passing governments to dilute, diminish, or abandon,” he affirmed.

“We firmly reject attempts to undermine it. We welcome an increasing number of states that have come in support of the award and what it stands for,” Duterte added.