Chinese Communist Party officials have locked down an estimated 51.6 million people across China as of Wednesday in an effort to contain the nation’s latest epidemic of the Chinese coronavirus almost exactly two years after China’s central city of Wuhan reported the first known cases of the disease.

The epidemic has especially affected Henan province where two major cities, Anyang and Yuzhou (population 1.1 million), remained under full lockdown orders as of January 11. Anyang, a city in Henan, ordered the community’s 5.5 million residents to observe a strict stay-at-home order on the evening of January 10 for an indefinite amount of time. The Henan city of Zhengzhou observed a partial lockdown order as of January 11, though Agence France-Presse (AFP) on January 10 described the city’s 13 million inhabitants as “inching closer to a full lockdown.”

The Henan province county of Gushi and the Henan prefecture-level city of Xuchang were both under lockdown orders as of January 7.

“In Gushi, a Henan province county of 1 million residents, officials stopped people from leaving and discouraged visitors,” Reuters reported at the time. 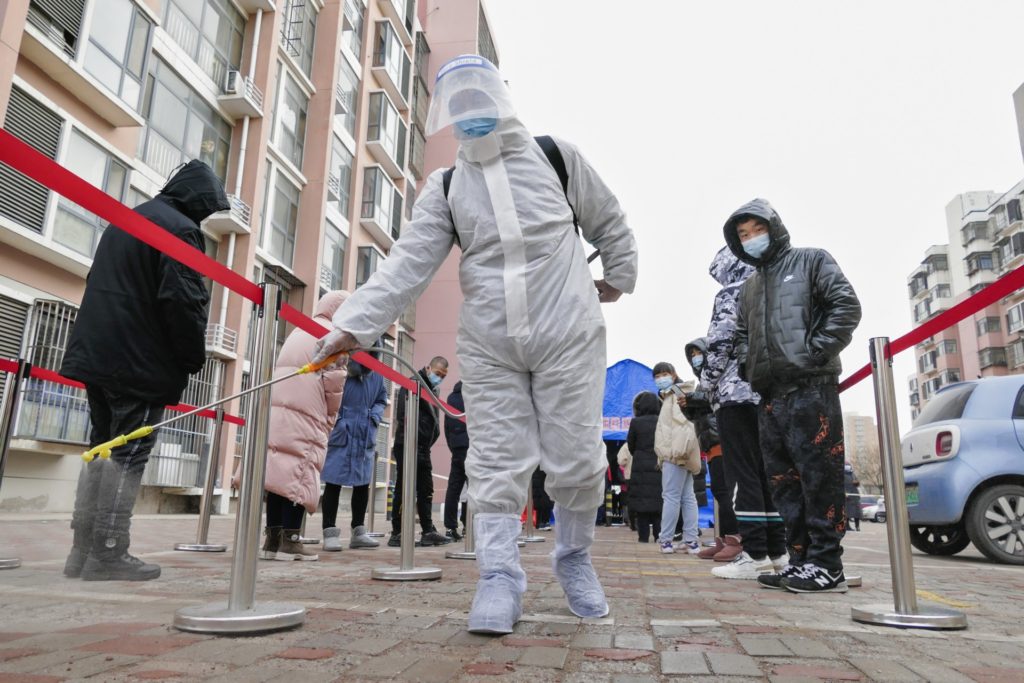 A worker wearing a protection suit sprays disinfectant as residents wearing face masks to protect from the coronavirus line up for the coronavirus test during a mass testing in north China’s Tianjin municipality, Sunday, Jan. 9, 2022. (Chinatopix via AP, File)

“Nearly all of the more than 4 million residents of Xuchang in Henan province, meanwhile, were to be tested for COVID-19 [Chinese coronavirus] on Thursday [January 6] and Friday [January 7] and movement of people was to be minimized,” the news agency added.

Health officials locked down Huaxian, a county located within and administered by Anyang city, on January 12 to stem the spread of local coronavirus cases, the Global Times reported. About one million people live in Huaxian.

Outside of Henan province, residents of another major Chinese city, Xi’an (population 13 million), continued to observe a full lockdown order issued by their local Communist Party leaders as of January 10. The 14 million inhabitants of Tianjin — a coastal metropolis in northern China directly administered by China’s national government — likewise remained under nearly total lockdown as of January 10. Communist Party officials overseeing Tianjin’s lockdown, which launched on January 9, partitioned the metropolis into “three zones with various levels of restrictions,” Fortune detailed on January 10.

“In the most restrictive areas, residents are barred from leaving their homes under any circumstance,” according to the U.S.-based business magazine.

“In partial lockdown neighborhoods, one member from each household can leave his or her home to buy groceries every other day. In the least restrictive areas, residents are free to move about in their neighborhoods but not to other parts of the city,” Fortune revealed.

Tianjin residents were forbidden from traveling out of the city for non-essential reasons starting January 10. People hoping to leave Tianjin must obtain special permission from their employers or local Communist party authorities and present a negative Chinese coronavirus test result produced 48 hours before their intended departure time before they are allowed to leave the community.

Tianjin directly borders Beijing and serves as a major commuter city for the Chinese national capital. A high-speed train takes roughly 30 minutes to travel from Tianjin to Beijing, though ticket sales for such routes were suspended on January 10 when Tianjin banned travel out of the city. The province surrounding Beijing, Hebei, likewise shares a border with Henan province. The threat of either Henan’s or Tianjin’s coronavirus outbreaks spilling over into Beijing has been magnified in recent days as the Chinese national prepares to host the 2022 Winter Olympic Games from February 4 to February 20. 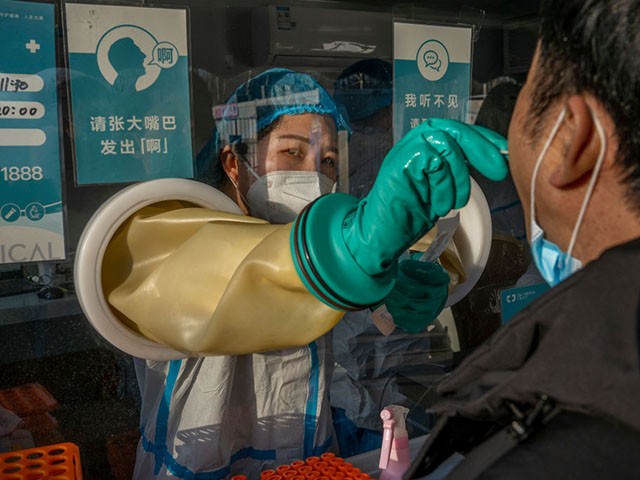 A medical worker performs a PCR test on January 10, 2022, in Beijing, China. On January 8 China reported its first two cases of Omicron variant in the city of Tianjin, 100 km south-east of Beijing, the entire population of Tianjin, 14 million, is being tested and some districts have been put into lockdown. (Photo by Andrea Verdelli/Getty Images)

Beijing — which discouraged travel out of the capital in recent weeks to curb the spread of China’s nationwide coronavirus epidemic — is not currently observing any lockdown measures, according to official state media reports. Chinese Communist Party authorities say they are instead focused on preparing conditions in Beijing that will allegedly cultivate a coronavirus-free “bubble” for Games participants. Under a “closed-loop” management system, Olympics officials say they will create a world separate from greater Beijing — a city of nearly 21 million residents — to prevent transmission of the Chinese coronavirus for the duration of the event.

“The Beijing organizing committee said the coronavirus situation is ‘under control’ and there is no call for a lockdown in the Chinese capital during the event,” United Press International (UPI) reported on January 11.

Beijing Olympic Organizer Huang Chun, who leads pandemic-related efforts for the Winter Games, told reporters on Tuesday “Beijing won’t need to be sealed off for the Games next month,” adding that he considers such a move “off the table.”