The U.S. Navy was moving swiftly on Wednesday to begin full recovery operations of an F-35C Lightning II Joint Strike Fighter lost overboard after a “landing mishap” on the deck of USS Carl Vinson (CVN-70) in the South China Sea.

The advanced warplane, which is assigned to Carrier Air Wing 2, was conducting routine flight operations in the South China Sea when the mishap occurred on Monday.

The plane’s pilot “safely ejected” and is in stable condition, as Breitbart News reported. No onboard crew members were injured in the accident.

In effect, China asserts the notion the maritime area where the F-35C was lost as its own internal waters and could act to enforce salvage rights. 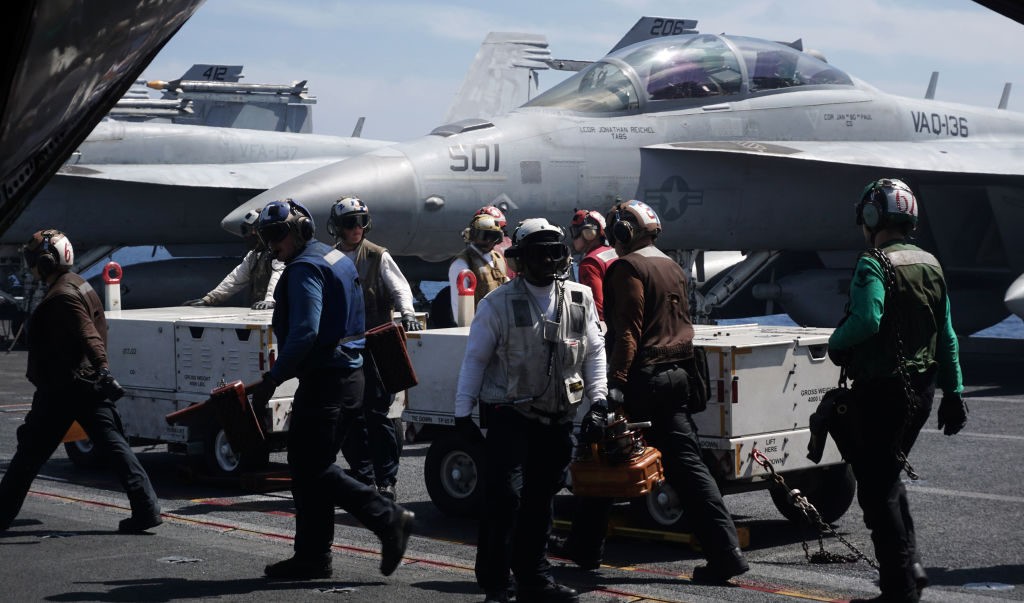 This photo taken on February 14, 2018 shows sailors working next to F-18 Hornet fighter jets on the flight deck of the aircraft carrier USS Carl Vinson, as the carrier strike group goes on a routine deployment mission in the South China Sea. (AYEE MACARAIG/AFP via Getty Images)

“I can confirm the aircraft impacted the flight deck during landing and subsequently fell to the water,” said Lieutenant Nicholas Lingo, spokesperson for the US Seventh Fleet.

“The US Navy is making recovery operations arrangements for the F-35C aircraft.”

Asked about an unsourced media report suggesting there were fears that the multimillion-dollar plane could fall into the hands of China, Lingo replied, referring to the People’s Republic of China:

“We cannot speculate on what the PRC’s intentions are on this matter.”

Monday’s F35 incident took place as two Carrier Strike Groups, led by the Carl Vinson and USS Abraham Lincoln, with more than 14,000 sailors and marines, were conducting exercises in the South China Sea.

The military says the drills were to demonstrate the “U.S. Indo-Pacific Command Joint Force’s ability to deliver a powerful maritime force.”