Chinese biophysicist He Jiankui — sentenced to three years in prison in December 2019 for “illegal medical practice” after using the CRISPR gene-editing system to alter the DNA of human embryos — may be “released” from prison in the “near future,” China state-run Global Times reported on Monday citing unnamed sources.

He claimed in November 2018 that he and his scientific team at the Southern University of Science and Technology in Shenzhen, China, had used CRISPR technology to edit the genomes of a number of human embryos “to disrupt a gene that codes for a protein that allows HIV to enter immune cells.”

He revealed the action while confirming the birth of “the world’s first genetically edited babies — twin girls,” the Associated Press (AP) reported at the time.

“He said he altered embryos for seven couples during fertility treatments, with one pregnancy resulting thus far. He said his goal was not to cure or prevent an inherited disease, but to try to bestow a trait that few people naturally have — an ability to resist possible future infection with HIV, the AIDS virus,” the news agency relayed after conducting an exclusive interview with the Chinese researcher.

The revelation shocked the scientific world as his experiment marked the first known use of gene-editing technology on human embryos.

“Scientists condemned He’s actions, saying that gene-editing technology was too premature to be used for reproductive purposes. They also said the experiment was problematic because it risked introducing a mutation with potentially harmful effects,” the scientific journal Nature observed at the time. 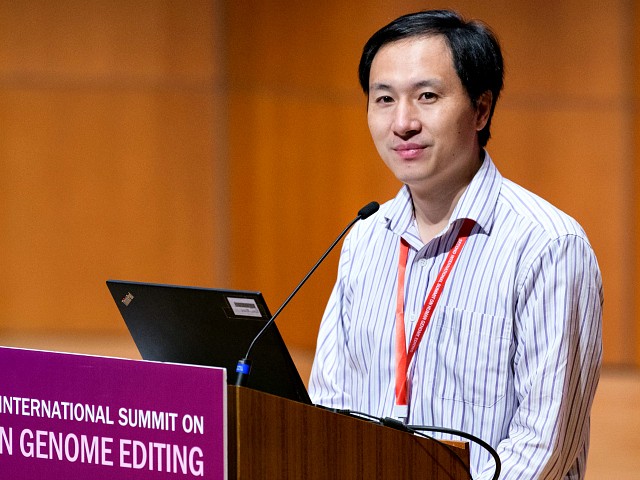 He detailed his use of CRISPR on human embryos in a series of interviews and speeches given in November 2018. Science magazine summarized the Chinese researcher’s experience, writing:

“[He’s team] … engineered the genomes of twin baby girls to cripple a key receptor, CCR5, that HIV uses to infect white blood cells — a modification they may pass onto their descendants.

The girls’ father is infected with HIV, but the purported justification for the study was not to protect the girls from the AIDS virus during pregnancy [but later in life]. The parents used in vitro fertilization and the father’s sperm was washed to remove HIV, which virtually eliminated the risk of the embryos being infected.

He told media outlets in late November 2018 that an additional (third) baby whose genome he had modified was due shortly. This baby was allegedly later born at an undisclosed time, according to court documents published by Xinhua in December 2019. The People’s Court of Nanshan District of Shenzhen sentenced He to three years in prison on December 30, 2019, after convicting him of “illegal medical practice.”