The hashtag “#IStandWithPutin,” referring to Russian President Vladimir Putin, was among the trending topics on Twitter in India on Thursday, China’s state-run Global Times reported on Friday.

“As of Thursday [March 3], #IStandWithPutin had become a trending topic on Twitter in 12 countries, including Kenya, Nigeria, South Africa, the US, Australia, Pakistan, Canada, the UK and India, and ranked 25th in global trends,” the propaganda newspaper reported on March 4.

The Chinese news site guancha.cn revealed “#IStandWithPutin” was the top trending Twitter topic in India, Kenya, and Nigeria on March 3.

A report by the Hindi news channel India TV on March 2 supported those published by Chinese state media on March 4.

#IStandWithPutin because he is only trying to save his country from the West!! Which you would know if you have been paying attention. Ukraine has got a clown for a PM who is dancing on the gestures of the west.
W A K E U P ! ! pic.twitter.com/5YoCZ6jqWC

India TV republished several posts on Twitter appearing to have been posted in recent days by people across India and Africa along with pro-Russia and pro-Putin hashtags.

One such statement by a Twitter user named Vian on March 1 read:

#IStandWithPutin because he is only trying to save his country from the West!! Which you would know if you have been paying attention. Ukraine has got a clown for a PM who is dancing on the gestures of the west.
W A K E U P ! !

This week’s Twitter trends in favor of Russia and Putin came in response to Russia’s military invasion of Ukraine on February 24. The Kremlin declared its intention to formally recognize the independence of two Russian-backed breakaway states in eastern Ukraine’s Donbas region on February 21 and sent additional Russian troops into those territories 72 hours later. Moscow’s military operation in Ukraine soon expanded beyond Donbas and remained ongoing at press time.

New Delhi and Beijing, two of Moscow’s biggest political allies, have so far chosen not to publicly condemn the Kremlin’s recent military action in Ukraine. This was evidenced on February 26 when India and China, along with the United Arab Emirates (U.A.E.), abstained from a vote by the U.N. Security Council toward a resolution that would have demanded Russia immediately withdraw all of its armed forces from Ukraine. The resolution ultimately failed to pass because Russia, a permanent member of the U.N. Security Council, vetoed the draft measure. 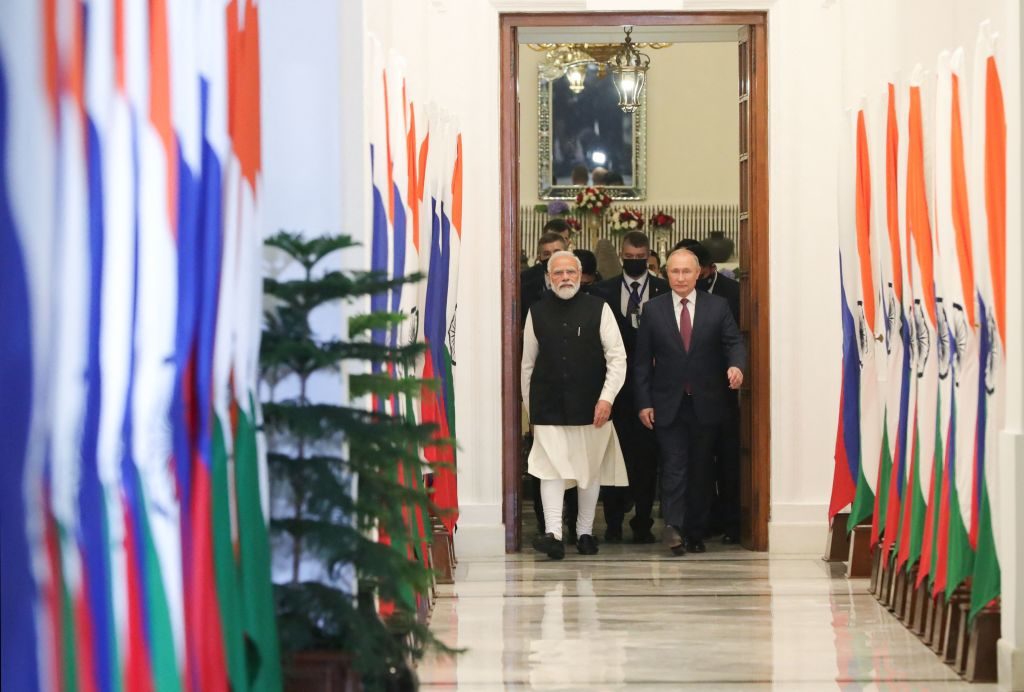 China’s state-run Global Times on March 4 offered the following explanation for why many people in India may have expressed support for Russian President Vladimir Putin this week:

The topics supporting Russia have attracted more Indian netizens especially after some media cited US officials as saying that the US is considering sanctions on Indian over the purchase of a missile defense system from Russia after India had abstained from a vote at the UN General Assembly condemning Russia over the conflict in Ukraine.

Some Indian netizens commented that Russia helps India when needed and therefore India should support Russia amid this tough time when “everyone is blindly hating our biggest ally.” Some praised Russia President Vladimir Putin for fighting for his country and fighting for the destruction of the monopoly of US and Western countries.

India renewed an existing defense pact with Russia in December 2021 for an additional ten years. The deal included 28 agreements to cooperate across a variety of military sectors. Indian Foreign Secretary Harsh Vardhan Shringla announced the pact’s signing on December 6, 2021. When announcing the development, Shringla confirmed Russia had “started delivering its long-range S-400 surface-to-air missile defense systems to India, based on a deal the two countries signed in 2018,” CNBC reported at the time.

“Supplies have begun this month and will continue to happen,” Shringla said, adding, “It is important to note that, whether it is us or Russia, we conduct an independent foreign policy and I don’t think we need to look at our relationship in the light of any other relationship that is there.”

Shringla referred to “the backdrop of US threats to impose secondary sanctions on the S-400 deal under the Countering America’s Adversaries Through Sanctions Act (CAATSA),” the Hindustan Times observed on December 6, 2021.

CNBC described the S-400 deal at the time as having the potential to “lead to sanctions from the United States under a 2017 law aimed at dissuading allies from purchasing Russian arms.”

“[S]ince the start of the conflict between Ukraine and Russia, the Modi government has tried to keep a delicate balance, which is why it abstained at the UN meetings. However, some politicians and opposition parties in India are trying to criticize the Modi government for doing so,” the Global Times wrote.

“It [the Indian opposition] cannot rule out that the Modi government is behind the online ‘water army’ to support its stance to counter opposition parties in India,” the newspaper noted.