Chinese state media on Monday continued their all-out effort to portray the Buffalo, New York, mass shooting as evidence that “white supremacy” and “neo-Nazi ideology” are dominant in the United States — while having absolutely nothing to say about the Chinese nationalist who opened fire on a Taiwanese church group in California over the weekend.

China’s state-run Global Times crowed that “lone wolf attacks” by white supremacists “could continue to emerge and even turn into organized crime and violence against non-white ethnic groups.”

In the view of these Chinese Communist Party editorialists, the entire Western world teeters on the brink of a racist bloodbath — and instead of addressing their systemic racism issues, Western leaders are picking on Russia for launching what they perceive as a small incursion in Ukraine:

The US and other Western European countries with similar social and economic problems, such as immigrant crises and racism, as well as an increasing wealth gap, are failing to fundamentally solve the problem, and attacks like the Buffalo shooting will anger other ethnic groups with non-Western cultural backgrounds and motivate anti-Western or anti-white extreme ideologies among other races and cause them to retaliate, said experts on Monday.

More dangerously, as supporting Ukraine and opposing Russia has become the unchallengeable political stance in the West after the Russia-Ukraine conflict began this year, Western mainstream media and governments have tolerated or ignored the problem of growing neo-Nazism in Ukraine targeting Russians or Russian-speaking Ukrainians. With many teenagers from the US and other Western countries inspired by nationalist Ukrainian military groups and organizations like the Azov Battalion and Right Sector, this will make the trend of extremism in the West more and more unstoppable, analysts noted.

“Shooting cases are not rare in the U.S., but the latest one in Buffalo shows some special characteristics that proved that neo-Nazi ideology is growing and continuing to influence white people, especially teenagers, in U.S. society,” the Global Times sniffed, launching into Chinese media’s umpteenth repetition of the links between the Buffalo shooter and neo-Nazi groups, especially Ukrainian neo-Nazis.

Another odious passage in the Global Times editorial dinged the U.S.-European “Five Eyes” alliance for failing to turn its full surveillance powers against its own citizens to “cut off the spread of extremism online.”

In the eyes of the authoritarian Chinese regime’s propagandists, this could only be because the Five Eyes nations are “showing tolerance to white supremacy and neo-Nazism,” not because they are more reluctant than China to spy on their own citizens.

The Global Times grabbed frantically at every news item it could use for its theory of white supremacy on the march across the United States, reaching all the way back to the Oklahoma City bombing in 1995, but it was completely uninterested in much more recent and relevant news item: Chinese nationalist David Chou, apparently a consumer of China’s bloodcurdling rhetoric toward Taiwan, accused of murdering one person and wounding five others in a California shooting spree on Sunday.

The Global Times showed little enthusiasm for applying its nation-indicting extrapolations to Chou, reportedly a member of at least one group designated as an agent of the Chinese state who reportedly possessed copies of Beijing’s warlike propaganda against Taiwan. 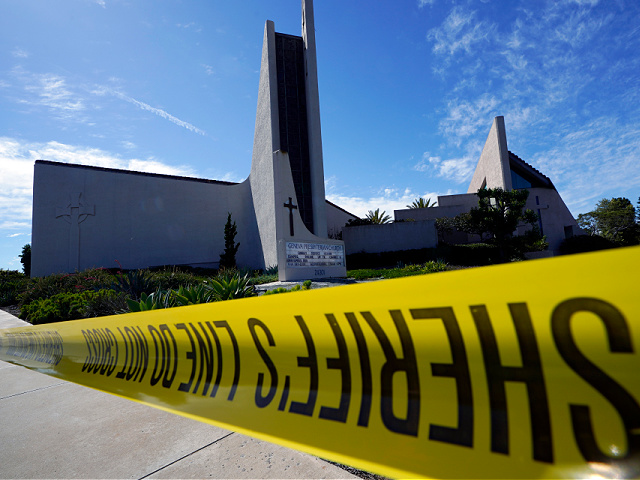 Crime scene tape is stretched across an area at Geneva Presbyterian Church in Laguna Woods, CA, Sunday, May 15, 2022, after a fatal shooting. (AP Photo/Damian Dovarganes)

Chou opened fire on a Taiwanese church group and would surely have racked up a far higher body count if not for the heroic actions of the man he managed to kill, Dr. John Cheng.

Chinese state media was not eager to explore how the incessant accusations of “secessionism” — and frequent threats to respond with violent force — flung at Taiwan by Chinese officials and propaganda outlets might have influenced Chou.

Chinese Foreign Ministry Spokesman Wang Wenbin was asked by a reporter at his Tuesday press conference to comment on reports that Chou was “motivated by political hatred, and he was upset about the political tensions between the Chinese mainland and Taiwan.”

“We have noted the report you mentioned,” Wang briskly replied. “Reports also said that this man emigrated from China’s Taiwan to the U.S. We hope the U.S. government will take earnest and effective measures to solve the worsening gun violence problem at home.”