“There have been urgent inquiries from many countries, and nearly 100,000 reagents will be sent to more than 50 countries and regions,” Jiangsu Bioperfectus Technologies told the Global Times in a statement on May 25.

The China-based diagnostic test producer Sansure Biotech told the Global Times on Thursday it had received dozens of orders for monkeypox testing kits “every day from abroad” over the past week.

Another China-based diagnostic test maker named Wondfo Biotech told the Global Times on May 26 that it had also documented an uptick in new orders for monkeypox testing kits in recent days, though it did not provide specific figures.

Sansure Biotech said on Thursday that the reagent for monkeypox virus it produces “can detect the virus within eight minutes via point-of-care testing (POCT), and 96 samples can be tested in half an hour via polymerase chain reaction (PCR).” 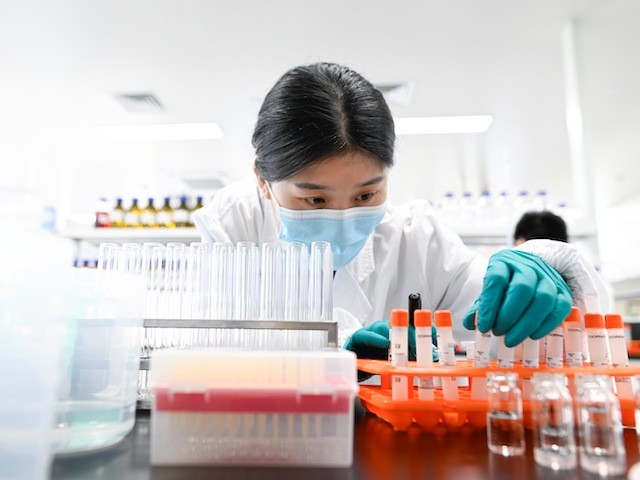 “Monkeypox is a rare disease that is caused by infection with monkeypox virus. Monkeypox virus belongs to the Orthopoxvirus genus in the family Poxviridae. The Orthopoxvirus genus also includes variola virus (which causes smallpox), vaccinia virus (used in the smallpox vaccine), and cowpox virus,” according to the U.S. Centers for Disease Control and Prevention (CDC).

Monkeypox is endemic only in parts of Africa, but the World Health Organization (W.H.O.) since May 13 has documented outbreaks of the disease in countries outside of Africa, including Australia, Belgium, Canada, France, Germany, Italy, the Netherlands, Portugal, Spain, Sweden, the U.K., and the U.S.

“Epidemiological investigations are ongoing, however, reported cases thus far have no established travel links to endemic areas. Based on currently available information, cases have mainly but not exclusively been identified amongst men who have sex with men (MSM) seeking care in primary care and sexual health clinics,” the W.H.O. observed at the time.

“Health officials say most of the known cases in Europe have been among men who have sex with men, but scientists say it will be difficult to disentangle whether the spread is being driven by sex itself or merely close contact. Anyone can be infected through close contact with a sick person — or their clothing or bedsheets,” the Associated Press reported on May 23.