China’s state-run Xinhua news agency boasted on Thursday of the alleged vibrant culture and job market in occupied East Turkistan, after proclaiming China would continue its “counterterrorism and deradicalization” – a euphemism for the genocide of the region’s native people.

The assertion that the Communist Party will continue to fight “terrorism” on Tuesday followed a visit by United Nations High Commissioner for Human Rights Michelle Bachelet to East Turkistan, which China calls “Xinjiang,” last week, in which Bachelet hailed China for its “tremendous achievements” in human rights and did not mention the ongoing genocide. Bachelet also claimed that government officials had dismantled the concentration camp system in the region, which Beijing refers to as its “vocational and educational training center” network.

Multiple international human rights experts and democratic governments, including the administrations of both President Donald Trump and Joe Biden, have concluded that China’s practices in East Turkistan against the native Uyghur population and other Muslim-majority ethnic groups constitute genocide, Evidence supporting the genocide declaration include satellite evidence and eyewitness testimony of the use of concentration camps to imprison up to 3 million people, the use of mass sterilization of women to eliminate non-Han ethnic groups, the enslavement of Uyghurs in factories and cotton fields nationwide, and evidence of violent practices like torture, rape, and live organ harvesting.

Bachelet did not address this evidence in any meaningful way, prompting international calls for her resignation. The U.N. human rights chief previously served as the socialist president of Chile, using her power to bring Chile economically and politically into China’s orbit. 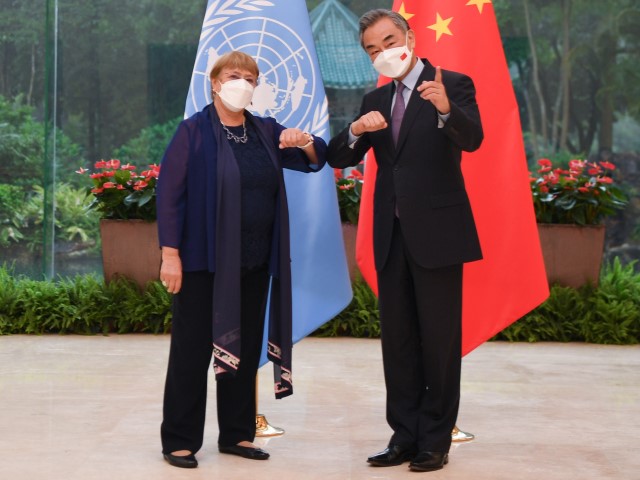 Xinhua asserted on Tuesday that China would continue the genocidal practices that it, and Bachelet, referred to as anti-terrorism operations.

“With significant progress in counterterrorism and deradicalization, China’s Xinjiang region is well justified to continue its law-based approach to fighting the ‘three forces’ of terrorism, separatism and extremism,” Xinhua related. “The ‘three forces,’ driven by their goal of splitting the country, had caused heavy casualties through masterminding and organizing terrorist attacks in Xinjiang Uygur Autonomous Region and even other places in China over a period of time.”

Xinhua claimed that the genocide, which began in 2017 and which the Chinese government naturally does not recognize as such, resulted in the end of terrorist activity in East Turkistan, calling it “a remarkable achievement that has, to the maximum extent, ensured the primary and basic rights to life and development of people of all ethnic groups in the region.”

The state propaganda agency nonetheless stated that continuing the ongoing genocide was necessary because the threat of terrorism continues to exist. Its examples of “terror” threats included German researcher Adrian Zenz’s work to expose human rights atrocities in East Turkistan, and the persecution of a Uyghur former senior government official.

Bachelet did not mention the Xinjiang Police Files, as Zenz has dubbed his release, during her visit.

“Disregarding the all-round development and progress in Xinjiang, some Western countries and anti-China forces, under the guise of human rights, have concocted and hyped up monstrous lies to serve their political motive of using Xinjiang to contain China,” Xinhua concluded. “In accordance with the law, Xinjiang is fully justified to continue its resolute strike against the ‘three forces’ to consolidate its hard-earned outcomes in this regard, safeguard people from falling victim to them, maintain a stable and safe environment for economic and social development, and uphold national sovereignty, security and territorial integrity.” 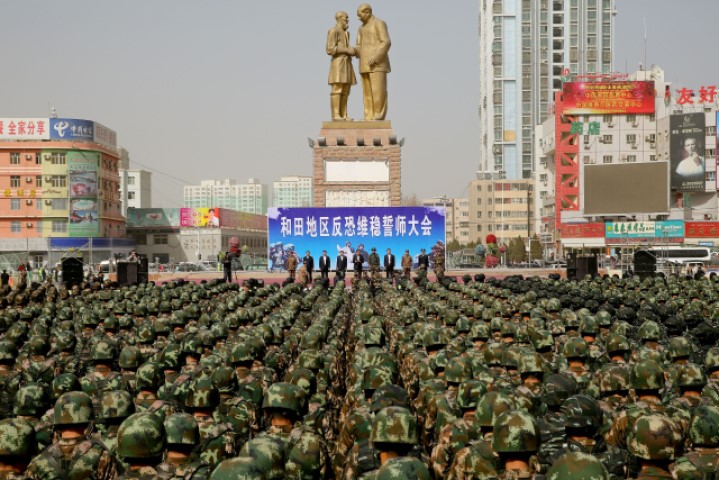 This February 27, 2017, photo shows Chinese military police attending an anti-terrorist oath-taking rally in Hotan, also known as Hetian, in northwest China’s Xinjiang Uyghur Autonomous Region. On state television, the “vocational education center” in China’s far west looked like a modern school with happy students. But earlier this year, one of the local government departments in charge of such facilities in Xinjiang’s Hotan prefecture made several purchases that had little to do with education: 2,768 police batons, 550 electric cattle prods, 1,367 pairs of handcuffs, and 2,792 cans of pepper spray. (STR/AFP via Getty Images)

On Thursday, Xinhua published two articles taking a different approach to the genocide, claiming that not only is it not happening, but that China has improved the quality of life of residents of East Turkistan since the genocide began.

“Putting a strong focus on unemployment, the region has been encouraging people of all ethnic groups in urban and rural areas to find jobs and start their own businesses through multiple channels and in various forms,” the outlet claimed, citing a local official.

The article did not address the widespread evidence that government “employment” programs in East Turkistan actually sell Uyghurs as slaves to factories and farms using government discounts for those who opt in.

In another article, Xinhua celebrated East Turkistan’s bazaars, claiming that the government has now made it so that Uyghurs use cars instead of donkeys and all carry mobile phones. Omitted from the article is that the Chinese Communist Party mandates that all cars in East Turkistan have a GPS monitoring chip installed and that it uses mobile phone applications to monitor the human connections and opinions of every resident in the region.

“Poverty alleviation and the eradication of extreme poverty, 10 years ahead of its target date, are tremendous achievements of China,” Bachelet said last week from Guangzhou, southern China, before leaving the country. “The introduction of universal health care and [an] almost universal unemployment insurance scheme go a long way in ensuring protection of the right to health and broader social and economic rights.”

Of East Turkistan in particular, Bachelet said the “vocational” centers – the concentration camps – had been dismantled, and that she had expressed “concern” over “counterterrorism” efforts. Bachelet did not use the word “genocide.”