DALLAS, Texas — It is like a Texas sampler platter of the 2014-15 Common Core offerings served up around the state — Sadlier “Common CoreEnriched Edition” Vocabulary, Springboard and Carnegie Math. There is even a kindergarten handout that defines the importance of the term “Common Core.” Parents are up in arms. More so, they are worried. They have heard endlessly that there is no Common Core in Texas. It is the law. Yet, this is what is coming home in the backpacks. 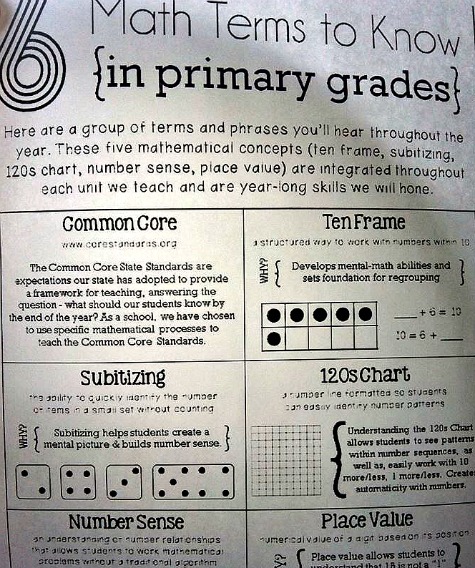 To her surprise, a Boerne Independent School District (ISD) parent pulled out the “6 Math Terms to Know (in primary grades)” from her kindergartener’s Fabra Elementary take home folder in the Texas Hill Country. Apparently, “Common Core” itself is a math term that five year olds need toknow.

The sheet places a high value on Common Core, which is defined as “The Common Core State Standards are expectations our state has adopted to provide a framework for teaching, answering the question – what should our students know by the end of the year? As a school, we have chosen to use specific mathematical processes to teach the Common Core Standards.”

It also provides a link to the official Common Core site for the five year old, who may or may not be reading yet, but she or he will be able to find numerical patterns using a process called “subitizing” to identify the number of items in a small set without counting. It’s all part of what the handout calls,the new number sense or “an understanding of number relationships that allows students to work mathematical problems without a traditionalalgorithm.”

The parent who provided the handout asked Breitbart Texas to withhold her identify for “fear is that my children will be targeted at school by Common Core supporters.”

Breitbart Texas reached out to the Fabra Elementary principal at whose school the Common Core handout was given to a kindergarten class. The Communications Director for Boerne ISD, David Boggan, instead, spoke to Breitbart Texas. He said that the district ascribes to the TEKS (Texas Essential Skills and Knowledge), the Texas standards, and not the Common Core. That said, he added the sheet “was obtained through the teacher out of her own resources.” He advised that that the teacher had been spoken to and that the district “is confident that this will not happen again.”

This isn’t the first time Breitbart Texas reported about a teacher who just happened to throw in a Common Core assignment or handout with the exact same explanation given by a district representative.

However; it doesn’t explain the happenstance of a Texas class being given a “Common Core” textbook. Last school year, Breitbart Texas questioned Education Commissioner Williams about similar Common Core books and learning materials surfacing in the schools. He explained, “Typically, textbook companies are trying to sell to the largest market so they also align to the Common Core. Some of the standards are similar to the TEKS but that doesn’t mean Texas is part of Common Core.”

Similar enough to use the same books, maybe. Texas, which rejected Common Core still wrestles with its own demon, CSCOPE, the controversial curriculum management system that had its own issues with biased and incorrect historical content. Today, it lurks in the shadows as the rebranded TEKS resource system.

Breitbart Texas contacted the Texas Education Agency (TEA) to better understand if Sadlier’s “Common Core Enriched” vocabulary was just another fluke in Northwest ISD or something else.

Spokeswoman DeEtta Culbertson told Breitbart Texas that “the local districts have the authority to purchase them from either the State Board of Education (SBOE) approved list, a locally adopted list, online materials and/or e-materials.”

The SBOE’s list is 247-pages with every approved item for the 2014-15 school year. It also shows to what degree materials are TEKS aligned. Most products have Texas in their titles such as Texas Comprehensive, Texas System, Texas Edition, Texas Student Pack and, although not everything identifies as “Texas” on that list, SBOE member Ken Mercer, the Lone Star voice in the Advanced Placement US History pushback, assured Breitbart Texas that to be on that list means “it has to be TEKS aligned.”

Then, on the Carnegie Math website, it stated that their curricula “are fully aligned to state and national mathematics standards for grades 6 through Algebra II.” Breitbart Texas could not find  any corresponding TEKS curriculum standards online at Carnegie Math.

The Texas Education Code (TEC) 28.002 states that a district superintendent, along with the Local Board of Trustees are required to certify that the district has instructional materials that cover all TEKS elements as part of the required curriculum, other than physical education, for each grade level, according to the TEA; although, there is a provision that allows for non-TEKS instructional materials under 66.1307 of the Texas Administrative Code (TAC).

Regardless of how these materials are getting into Texas classrooms, parents are upset. Mercer added, that they should be outraged “and screaming at their local boards” especially if their school boards “chose Common Core books over SBOE approved materials. “

“We need the legislators to give the power back to the state board (of education),” Mercer stated. He was referencing Senate Bill 6 (SB 6) which diminished a lot of the board’s oversight capabilities, ramped up online learning, created a 50% TEKS alignment rule, and may have also filled the gap with the illusion of local control, according to Mercer. Then throw education bureaucrats and lobbyists into the mix.

“This is not local control by moms and dads it’s control by lobbyists,” Mercer added, saying that the SBOE’s strength was in their approval process. School districts could only buy books from that approved list. There were a variety of choices per subject per grade but the materials were “clean,” as he put it.

“A book vetted through the SBOE has been through a clear and transparent process. We invited parents and educators to vet the books too. That’s the beauty of that whole process,” he said, suggesting with stronger SBOE oversight, there’d wouldn’t be Common Core materials slipping through the cracks into the classroom.