HOUSTON, Texas – A DPS report leaked February 24th warns that “Deported criminal aliens too often exploit the porous border and return to Texas to commit additional crimes.” Spencer Golvach is a victim of one of those crimes. He was sitting at a stoplight when an illegal alien who had been deported four times between 2003 and 2010 randomly shot him. The calloused criminal then drove several miles and randomly shot Juan Garcia. He shot at another couple some miles up the road and was killed by a deputy who heard the gun shots.

Breitbart Texas interviewed Dan Golvach, Spencer’s father. During the video interview the grieving father said “my son is dead because the concept of borders is dead.” Mr. Golvach wants politicians and the public to know that the murderer had a history of violent crime, was deported, but “A Victor Reyes, an illegal alien, pulls up next to him, pulls his gun out, rolled his window down and blew my son’s brains out.”

Mr. Golvach believes stiffer jail time could be a solution to defer reentry.  He said “I think that if you are a felon, and you have committed crimes in this country, and you have been deported, well there has to be some sort of deterrent that when you are sitting on the other side of that border that you think about.”

Victor Rodriguez Reyes was born in Reynosa, Mexico. He was convicted of burglary of a building in Hidalgo County in 2002. He pleaded guilty and served three years of probation, did 120 hours of community service, and was assessed a fine. In 2003, Reyes broke a beer bottle on a man’s head and was charged with aggravated assault, a state felony. A motion to revoke his probation was granted and he was deported. In 2004, he illegally crossed the border twice and was deported again. In 2006, he was convicted of aggravated assault with serious bodily injury related to special maritime circumstances. He served 63 months in federal prison and in 2010 was deported again.

The factual circumstances by which Reyes happened to be in Texas in 2015 to murder Spencer Golvach is unknown. What we do know is that he obviously got through the border.

Mr. Golvach wants the public to know that the man who killed his son and was deported, was a criminal who had been convicted of crimes of violence. Spencer’s murderer was initially reported by law enforcement and the media to be a “Victor Manuel Reyes” who had been found guilty of drug crimes.

There is ample and compelling evidence that the Texas-Mexico border is not secure, and this lack of security undermines public safety and homeland security in every region of the state. Crime has become increasingly transitory, transnational, organized, and discreet, and terrorism has become more disaggregated. An unsecure border with Mexico is the state’s most significant vulnerability as it provides criminals and would-be terrorists from around the world a reliable means to enter Texas and the nation undetected. This is especially concerning today, in light of the recent attacks and schemes around the world.

The DPS report was submitted to the 84th Texas Legislature and the Office of the Governor in response to a June 2014 directive by the Governor, Lieutenant Governor, and the Speaker of the Texas House of Representatives. DPS was asked to address Operation Strong Safety.

The Washington Post reported that the Texas Department of Public Safety said the report “was not meant for public distribution.” Department press secretary Tom Vinger was reported to have emailed the Post and said “that report was inappropriately obtained and [the Chronicle was] not authorized to possess or post the law enforcement sensitive document.” Breitbart Texas independently verified this statement with the DPS press secretary.

The DPS Report stated “A percentage of the illegal aliens (IA) smuggled into Texas are committing crimes throughout the state, including homicide, robbery, burglary, kidnapping, and sex trafficking. Deported criminal aliens too often exploit the porous border and return to Texas to commit additional crimes.”

The dangers of a porous border do not affect just those on the border. An IA who was deported multiple times has been charged with the sexual assault of a 9-year-old Parker County girl in North Texas. As late as January 2015, an illegal alien sex offender was arrested in Austin. He had been deported in 2012 after a conviction for indecency with a child. In 2013, he reentered the U.S. by swimming the Rio Grande River near Laredo. 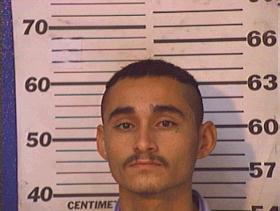 These criminal threats are not always readily apparent. The dated mugshot provided of Reyes from his 2001 arrest in Hidalgo County shows he was not a tattooed, gold-toothed, gang-member-looking-thug, seen in other criminals’ mug shots. He was someone who would not have raised any alarms if he were seen in your neighborhood. When asked how seeing Reyes’ mugshot affected him, Dan Golvach, told Breitbart Texas “Thank God I don’t have to look at him in Court!”

The Report on Operation Strong Safety warned that “The consequences of a porous international border with Mexico are not limited to the border; rather, they reverberate throughout the state and nation. In fact, many of the most serious consequences do not occur in our border communities. Instead they occur in our major urban areas where there is a proliferation of gangs with direct access to the drugs and people smuggled into Texas within the high-demand retail markets.”

It also detailed the effect of the Mexican Cartel on violent crimes in the United States. “The Mexican cartels have also carried out acts of violence in Texas and elsewhere in the U.S., including murders and kidnappings, aimed at recovering lost drug loads, intimidating or silencing rivals and witnesses and retaliation against their enemies.” Nearly all illegal aliens who illegally enter the United States made use of alien smuggling organizations, which are nearly all associated with Mexican cartels.

DPS reported that 313,100 illegal aliens were apprehended in Texas in 2014.  Department of Homeland Security statistics reveal that more than 96,000 illegal aliens were arrested for criminal offenses and put into Texas jails between June 2011 and December 2014. Those arrests included 561 homicide charges, 27,588 assault charges, 8,984 burglary charges, 31,154 drug charges, 394 kidnapping charges, 17,133 theft charges, 23,476 obstructing law enforcement charges, 1,972 robbery charges, 2,836 sexual assault charges, and 3,770 weapons charges.  The DPS Report stated that these numbers are likely an undercount of all the crime in Texas committed by IAs.

The Report stated that “The Texas State Legislature long ago recognized the importance and linkage of border security to public safety, and consistently, over the last several sessions, has dedicated substantial resources to increase capabilities in the border region.”

Victor Reyes came over the border at will, and deportation and borders obviously meant nothing to him.

Mr. Golvach told Breitbart Texas “this is a place of total despair. There is no healing from this.”