A Texas cop and Marine Corps veteran is under fire over saying that ISIS attacks on Americans should be met with “extreme violence” and stating “That is the only thing these rock monkeys in the Middle East understand.” The Ellis, Texas, constable says the term “rock monkeys” is one used in the military. He later posted that he was adding the words ISIS in parenthesis to make it more clear for any media or reporters “who want to make me a racist.”

Within 24 hours of the Texas constable’s Facebook post, Avi Selk of The Dallas Morning News wrote a less than flattering version of the post, and included other Texas elected officials on the topic of Islam. Friends and supporters have speculated on whether the constable’s primary opponent contacted the press about his post. 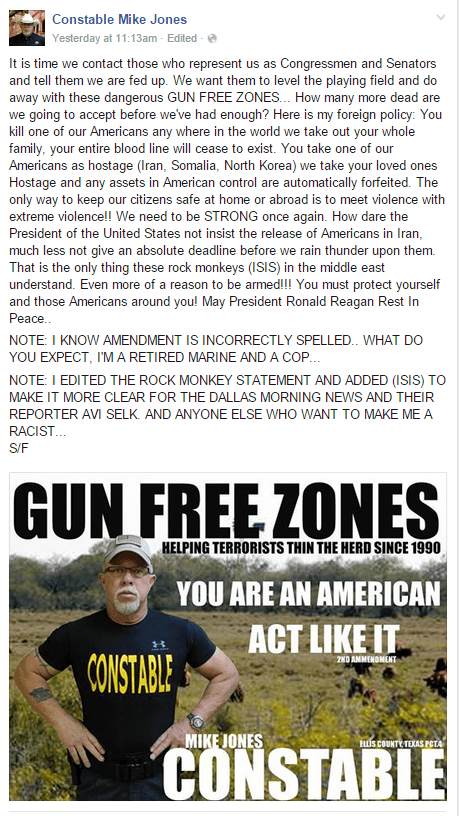 Ellis County is located in northeast Texas. The seat of the county is Waxahachie, Texas.

In his Facebook post, the Texas constable first encouraged others to contact their congressmen and senators to tell them “we are fed up. We want them to level the playing field and do away with these dangerous GUN FREE ZONES.”

He also wrote, “Here is my foreign policy. You kill one of our Americans any where in the world we take out your whole family, your entire blood line will cease to exist.” He continued, “You take one of our Americans as hostage (Iran, Somalia, North Korea) we take your loved ones Hostage and any assets in American control are automatically forfeited. The only way to keep our citizens safe at home or abroad is to meet violence with extreme violence!! How dare the President of the United States not insist the release of Americans in Iran, much less not give an absolute deadline before we rain thunder on them. That is the only thing these rock monkeys (ISIS) in the middle east understand. Even more of a reason to be armed!!! You must protect yourself and those Americans around you!”

The constable concluded his post – “May President Ronald Reagan Rest In Peace.”

Jones told Breitbart Texas that his family has given almost 60 years of consecutive service to this country. The constable is a 20 year retired Master Sergeant, his father was a 20 year retired Marine Captain, his nephew served 17 years in the Marines, and his great nephew is leaving for USMC boot camp before Christmas.

The response on the Constable’s Facebook page was very supportive. One man stated, “The Dallas Morning news is pathetic. Constable Mike Jones is by far one of the most genuine, respectful and down to earth men I’ve ever met. It really pis*es me off for them to twist his words and try to make him out to be someone he’s not. I have nothing but respect for you and what you stand for sir! Thank you for our service to our country and your continued service to Ellis County.” 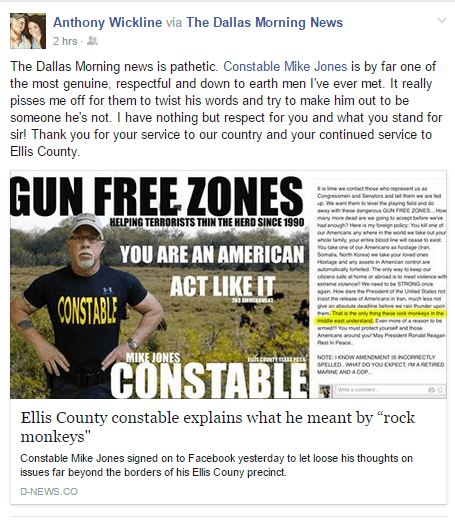 Another Facebook user shared the Dallas Morning News and wrote, “Support our Constable Mike Jones, who it seems have offended the liberal media in the mess of a county to our north.” 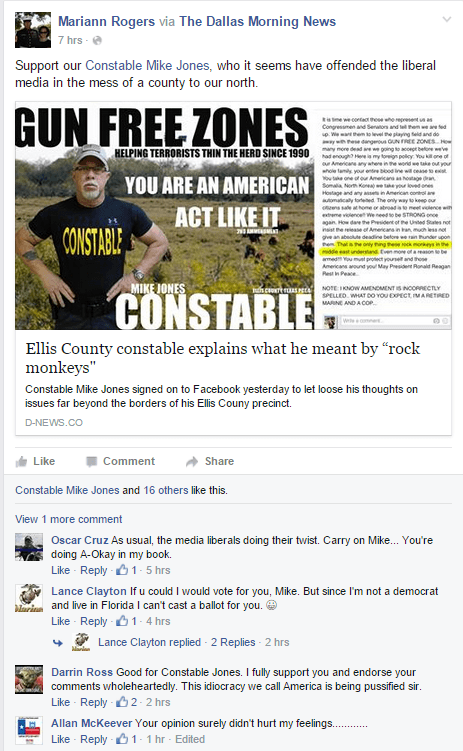 Many who posted on the constable’s Facebook page, or made comments on the posts, referred to the Dallas paper as “liberal.” Others speculated as to whether Jones’ opponent “called the liberal The Dallas Morning News to try to start trouble” saying “the fact they support that liberal Dallas ‘newspaper’ tells me I don’t want their candidate representing me. TDMN loves to criticize anything conservative.”

After he was contacted by the Dallas paper, the Constable made another post on his Facebook page. He took the opportunity to clarify that his “Rock Monkey” statement referred to ISIS, formerly known as ISIL. He wrote, “These guys post videos of their extreme torture and death to everyone that doesn’t follow the Sharia Law as they interpret it. Muslims and Christians alike.”

He explained, “I have seen videos of them burning ALIVE a F-16 pilot from Jordan. He was locked inside a cage. … I watched him melt before the camera, his skin dripping off his face and hands.” Breitbart News reported about this event and included the graphic video in the article. He also stated that “I have seen videos where they behead Muslim’s and Christians alike with knifes and swords.” Breitbart News has also reported about such events. 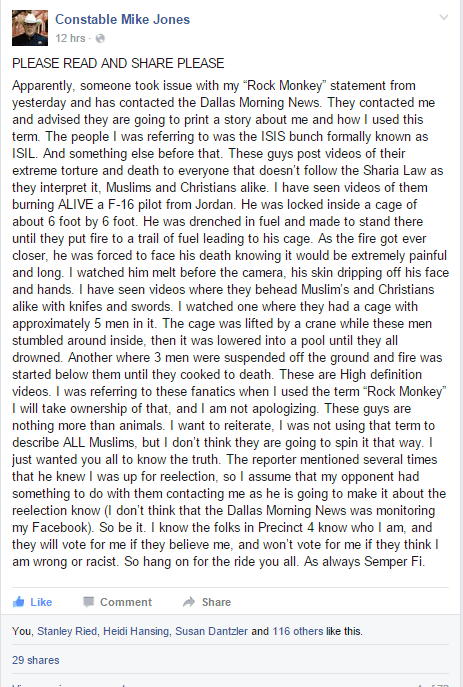 The Texas lawman continued, “I watched one where they had a cage with approximately 5 men in it. The cage was lifted by a crane while these men stumbled around inside, then it was lowered into a pool until they all drowned. Another where 3 men were suspended off the ground and fire was started below them until they cooked to death.”  Breitbart News reported about both of these incidents.

Jones explained, “I was referring to these fanatics when I used the term “Rock Monkey” I will take ownership of that, and I am not apologizing. These guys are nothing more than animals. I want to reiterate, I was not using that term to describe ALL Muslims, but I don’t think they are going to spin it that way. I just wanted you all to know the truth.”

Breitbart Texas spoke to the unapologetic constable who said, “I am an opinionated elected Republican who won’t back down.” He also mentioned a message to him that said, “It’s sad when Russia is more American than America. In relation to taking the fight to ISIS before they get here.”

The constable is seeking reelection to a third term next year. When asked by Breitbart Texas to elaborate upon the good things about him he said, “It’s hard for me to prop myself up because in my mind, this is what all men should do. So I don’t feel special. I just feel that there are bad people out there who aim to hurt Americans and Christians, and I feel we are here to stop them.” He asked, “Sound Corny? Does to me, but that is how I live my life. Always have.”

Jones has spent over 37 years in service to others, in the Marine Corp, as a police officer, and a constable. He told Breitbart Texas, “It’s all I know, and I’m passionate about it.” He added, “It just kills me to see our reputation which was built by brave men erode away in just seven years with Obama at the wheel.”

Lana Shadwick is a contributing writer and legal analyst for Breitbart Texas. She has served as a prosecutor and associate judge in Texas. Follow her on Twitter @LanaShadwick2