Breitbart Texas traveled to the Mexican States of Tamaulipas and Coahuila to recruit citizen journalists willing to risk their lives and expose the cartels silencing their communities.  The writers would face certain death at the hands of the various cartels that operate in those areas including the Gulf Cartel and Los Zetas if a pseudonym were not used. Breitbart Texas’ Cartel Chronicles are published in both English and in their original Spanish. This article was written by Reynosa’s “AC Del Angel.”

REYNOSA, Tamaulipas — Mexican authorities continue to track down the leadership of the Gulf Cartel, however, the attempts to capture them have resulted in almost daily shootouts and blockades in this border city.

One of the most dramatic shootouts took place Monday afternoon when a convoy of Mexican soldiers came under fire by cartel gunmen, the Tamaulipas government announced through a prepared statement.

Tamaulipas law enforcement sources confirmed to Breitbart Texas that the shootout was the result of military forces clashing with the personal guard of the Gulf Cartel’s Juan Manuel “Comandante Toro” Loisa Salinas. That particular shootout lasted for more than 20 minutes.

The fighting was so intense that the City of Reynosa and the State of Tamaulipas were forced to acknowledge the violence and issue out alerts on social media warning residents to avoid the area. In a  similar fashion, organized crime members activated a series of contingency protocols where gunmen set out to create chaos and slow down military forces. The chaos was created by hijacking buses and tractor trailers in order to park them across main avenues as to stop the flow of traffic and keep law enforcement away. 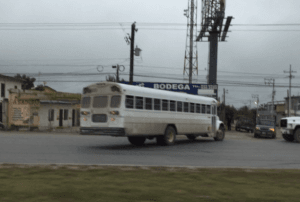 Cartel members used this bus to block the street

In a similar fashion, cartel gunmen began throwing dozens of road spikes along the city’s avenues in an attempt to deflate passerby’s tires and thus causing more traffic jams.The strategy worked, El Toro’s gunmen were able to slow down the military forces in order to give time for the cartel boss to escape. 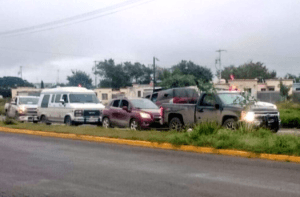 At the end of that shootout, authorities were able to arrest four of the gunmen who had stayed behind to fight and seize a massive weapons cache that included 42 automatic and semi-automatic rifles. Authorities also seized various SUVs including one that had armor plating.

Suspected Gulf Cartel gunmen at the moment of their arrest

On Tuesday afternoon, authorities again clashed with cartel gunmen in another chapter of the ongoing saga of the regular cartel shootouts in this city.