The largely “old school” patriots did not speak in politically correct feel-good jargon. Instead, they spoke in plain English and voiced concerns over acts of radical Islamic terrorism occurring across Europe and in the United States and feelings that their nation was slipping away.

Actually, they gathered across the street from CAIR’s Dallas chapter office to protest on the overcast and blustery afternoon. The temperature dipped into the high 30’s and, with the wind, it felt 10 degrees colder. There were no counter-protesters like at previous demonstrations held at the Richardson and Irving mosques. No representatives from CAIR, no local news crews, only the BBC, which filmed a documentary on the group. However, the two-person production film crew told Breitbart Texas they could not speak about the project. Two visible patrol cars parked on the north side of the park and kept a watchful eye. 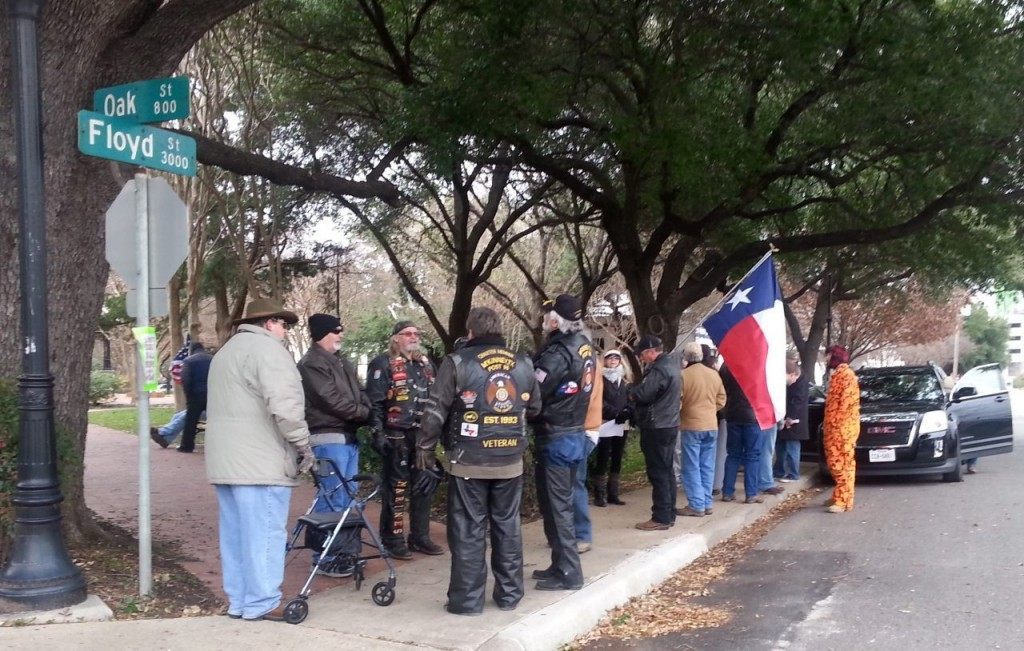 BAIR leadership cited CAIR-related concerns as the reason for the protest. Breitbart Texas’ Bob Price reported on BAIR’s claims that the Richardson mosque has a “documented history” of taking in Syrian refugees and working with “terrorist front groups like CAIR (Council on American Islamic Relations).”

Breitbart News reported on an FBI chart uncovered through a Freedom of Information Act (FOIA) request which found CAIR to be a Hamas-related organization. CAIR, which fancies itself a civil rights organization, was listed as an unindicted co-conspirator in the Holy Land Foundation trial, a large terrorism financing case tried in Dallas. The article stated:

“In 2007, CAIR was named as an unindicted co-conspirator in the Holy Land Foundation (HLF) trial, a Hamas financing case that would result in the FBI ceasing its working relationship with CAIR. The HLF trial was the largest terror-financing case in American history. In 2008, during a retrial of the HLF case, an FBI Special Agent labeled CAIR as ‘a front group for Hamas’ during her trial testimony. In 2010, a federal judge reiterated that his court had ‘ample evidence’ that CAIR was involved in ‘a conspiracy to support Hamas.’ CAIR, which relies upon millions of dollars in Saudi cash, was recently listed by the United Arab Emirates (UAE) as a terrorist organization.”

John Usener, a father of four, a U.S. military veteran who served eight tours in Iraq, and the state captain for the BAIR-affiliated Three Percenters Texas, told Breitbart Texas he hoped Saturday would “bring attention to this organization (CAIR) in the hopes that the proper authorities not just law enforcement but government officials actually look at this group properly.”

BAIR is often portrayed as “Islamophobic” and “gun-toting” by the mainstream media. The Daily Mail described their first protest coming “just over a week after the Islamic State terrorist attacks on Paris, which sparked a surge in Islamophobia in the United States.” Counter-group Anti-BAIR’s leader Patrick Kelly later accused BAIR of “intimidating” people by protesting armed, Breitbart Texas reported.

Group founder David Wright III took a lot of heat in news reports for publishing the names and addresses of Muslims and Muslim supporters who spoke at an Irving city council meeting last year to oppose a proposed American Laws for American Courts (ALAC) resolution. It was not as widely reported that publicly posted list on the City of Irving’s website included the same data on residents who supported ALAC.

Although most protesters were from the Dallas and Fort Worth area, one 66-year-old man told Breitbart Texas he rode his motorcycle up from Houston that morning. Two brothers drove in from Corpus Christi. Some participants said they were first timers.

Kurt Oligher, a Fort Worth resident, who said he was a retired pilot and DOD flight instructor, called the event a “celebration, not a protest.” One of the things to celebrate, he said, was local law enforcement “who protect us against anarchy.”

Demonstrators identified themselves as dads and granddads, many proudly expressed they swore an oath to the United States Constitution as servicemen spanning several wars and/or conflicts overseas. One vet, Mac, told Breitbart Texas about his time chronicling history as a USMC photographer during evacuation efforts in Vietnam during the fall of Saigon in April, 1975.

Another, Bear, a North Texas biker told Breitbart Texas, “We are patriots, we are veterans, we are citizens and we’re Texans. We’re here to back our brothers, tell our city and state (government) that there are citizens out here who have had enough.” He also expressed his frustration with the mainstream media “labeling the patriots assembled today to take action against us” rather than focusing on the threats against the nation. “I’m a father of six and a grandfather and a vet.”

They were not all old guys either. Will Clem was among the handful of younger protesters. He told Breitbart Texas he co-founded BAIR. Two women attended. Many said they came to support BAIR for the first time. Not all protesters demonstrated openly armed. BAIR modified the gathering to the sidewalk and their “open carry” to adhere to private property and other Dallas laws after being unable to get the requisite park permits in time, according to Usener.

On Saturday, Wright mentioned to the group he landed in Facebook jail, which he said happened after he posted a photo “of a brother” in New York holding a sign that read: “VETS before Muslim Refugees.” The post was tagged at the top: “We removed the post below because it doesn’t follow the Facebook Community Standards.” 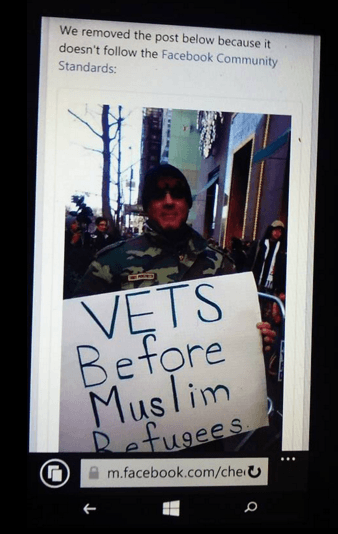 On the BAIR event Facebook page, Clem posted: “This picture got David Wright III blocked for 30 days. Do we no longer have the right to an opinion?”