A team of Mexican drug cartel gunmen murdered a top police commander and his two bodyguards from the town of Tlaquepaque, Jalisco with complete impunity. Shortly after the execution of the police officers, the command staff of the department announced they would resign.

In an intense video uploaded into Facebook, bystanders sought cover while they recorded a crew of gunmen pulling up behind a police SUV. The gunmen opened fire killing the officers inside.

“Stay down stay down,” a woman is heard in the video telling the bystanders.

Gunmen waving automatic rifles can be seen spraying the police vehicle form behind cover before getting into a light colored SUV and driving off. 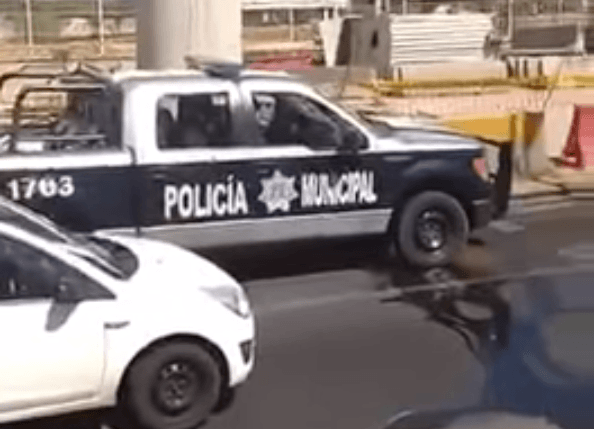 Francisco Javier Alejo Rodriguez was killed inside the vehicle. He served as the sub-director of operations for the local police department. Also in the vehicle were his bodyguards Daniel Rio Chavez and Jose de Jesus Hernandez, information released by the Jalisco Attorney General’s Office revealed.

The murder happened when the police vehicle stopped at a red light on a busy intersection.

In response to the murder of the officers, the Tlaquepaque Police Chief Martin Maldonado and his Operations Director Gregorio Martinez have announced their upcoming resignation, according to Mexico’s Proceso. Military and state police forces will take over the patrolling of the area while the city handles the void left by the municipal police force’s resignations.

It remains unclear which cartel the gunmen that carried out the hit belong to. The state of Jalisco is a busy drug processing area. Its territories have a high value because of the easy access to major shipping ports. While Jalisco is home to the fierce Cartel Jalisco Nueva Generacion, other cartels such as La Familia Michoacana, Los Zetas, the Gulf Cartel, and the Sinaloa Cartel have a presence there.