HOUSTON, Texas — A lone gunman turned a West Houston upscale neighborhood into a warzone that left two people dead, including the shooter. Several people including two police officers were wounded and a boy scout is credited with saving one of the victim’s life.

A man wearing shorts and no shirt walked up behind a woman talking to a customer at an auto service station on Sunday morning and reached around her with a pistol and shot the customer in the head, Ken Gibbs told Breitbart Texas. Gibbs, president of Houston oilfield equipment company, Power-Flow International, lives just a few houses away from the scene of the shooting and spoke with the woman who has since been identified as Paris Nichols.

Nichols leases the space on Sundays to operate a hand-wash auto detailing service while the auto repair shop is closed. 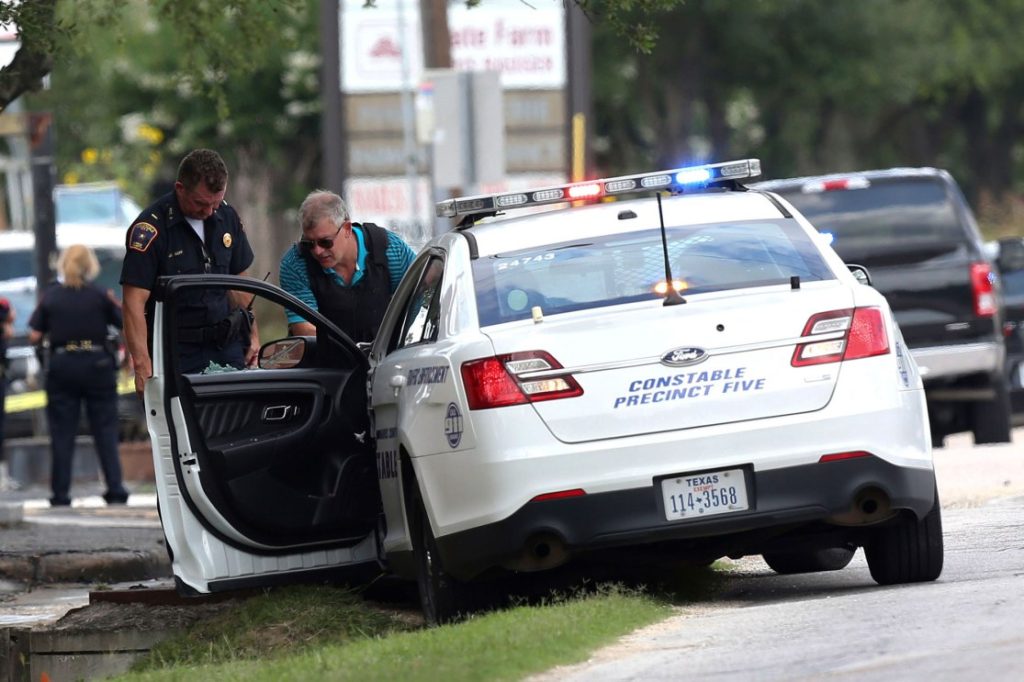 Gibbs said he was sitting in his home and noticed a neighbor moving up the street in an odd crouching position. He went outside to see what was going on and heard rifle shots that sounded like a gun range. He is an avid hunter and competition shooter. He could clearly hear the reports of a high powered rifle being fired from the service station he has frequented for years.

He said Nichols said she fell to the ground and began praying after he shot the man who was later identified as Eugene Linscomb, 56. He told her she would be fine because she was a Christian.

“Y’all calm down. I’m not going to kill y’all, y’all are Christians,” Paris said, according to the Houston Chronicle. The shooter was later identified by Houston police officials as Dionisio Garza III, an Army veteran who served in combat in Afghanistan. Police officials said the man harbored anti-government sentiments. 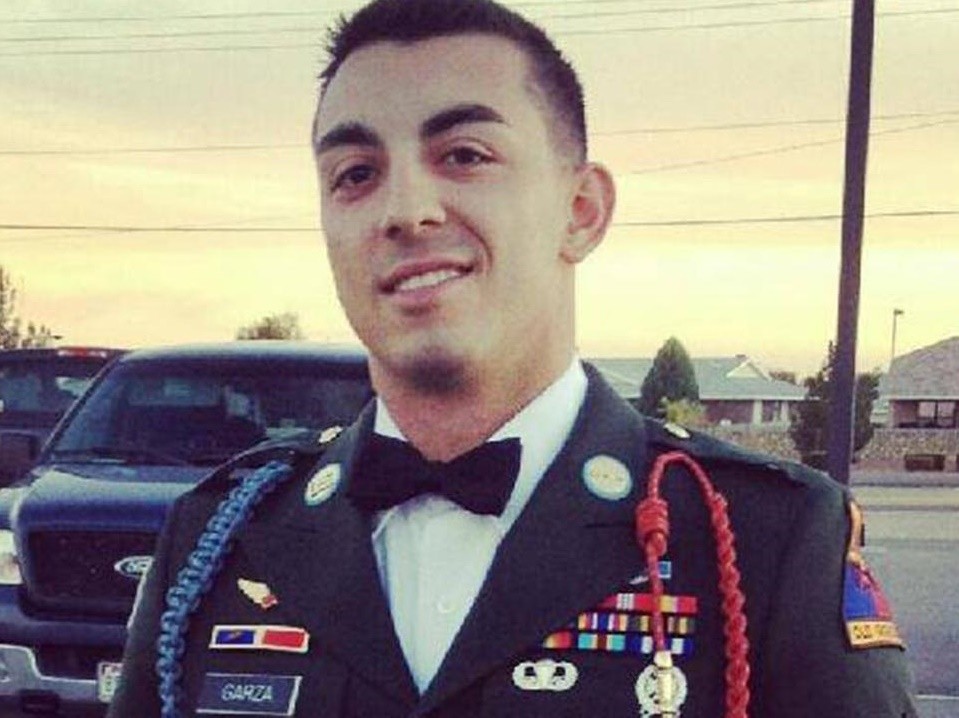 Nichols said the shooter was yelling about Jews, homosexuals, and Walmart. He claimed the world was coming to an end.

“You just don’t expect something like that right outside your door,” Gibbs said. He became concerned about cars coming down his street and driving into the shooter’s field of vision.

“People were heading to church and routinely cut down our street to avoid the heavy congestion at the light on Memorial Drive,” he explained. “I went over to the intersection where they turn into my neighborhood and blocked traffic.”

He said people were yelling at him until he explained why, then they were grateful. He and another neighbor probably stopped a hundred cars from driving into the line of fire.

Just up the street, Gibbs heard the continuing sounds of gunfire as Garza fired off what police later said was nearly two hundred rounds.

“When he walked up behind the woman he was carrying a pistol in his hand and had an AR-15 slung across his back,” Gibbs said. The shooting continued for about an hour Gibbs said.

The first responding police officer drew heavy fire, various news outlets reported. Somehow the officer avoided being hit by the 21 gunshots that riddled his windshield. Others were not as fortunate. 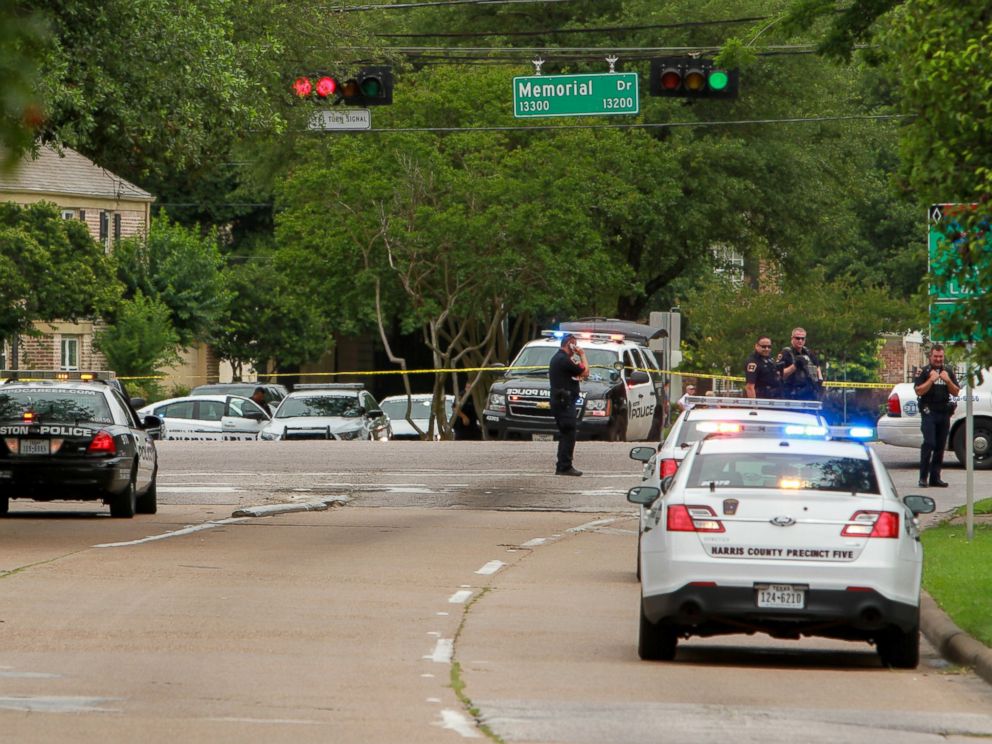 View of shooting scene from about where Gibbs’ house is located. AP Photo

One man responding to the scene with his own gun to try and stop the shooting was himself shot by the shooter, the KHOU CBS11 reported. The man, later identified by police as Byron Wilson, was transported to the hospital, initially as a suspect, and is being treated for his wound. He is expected to survive the shooting.

Denise Slaughter was shot five times by Garza, multiple outlets reported. She is expected to recover from her injuries. She is now listed in stable condition.

KTRK ABC13 reported she was on her way to a brunch with other family members. One of the people in her car described the situation, “They kept shooting at us. …Denise had good sense to step on the gas. … We got to safety, and saw that her wound was gushing blood.”

Two Harris County Precinct Five deputy constables were also shot during the attack. One was saved by his protective vest when he took a round to the chest. Both deputies were treated and released.

“This was the most terrifying event I have ever encountered in my life,” Deputy Danny Luna told the Houston Chronicle. He arrived on the scene and observed the situation. He rolled down both of his car windows so he might be able to get off a shot. He grabbed his own rifle and prepared to take action.

He said Luna eventually moved into his line of sight. That was when he was shot.

“I heard a gunshot, it sounded so close,” he told the Houston newspaper. “I heard another thump, boom. That was the bullet. It hit me right in the chest.” He fell to the ground and yelled to his partner that he didn’t know if he would make it.

Fortunately, the deputy had extra plating in his vest. The body armor vest had been penetrated through the first layer, but was stopped by the second. He later re-entered the standoff.

The other wounded deputy, Jaime Ayala, was shot in the thumb after Garza fired through the patrol car. 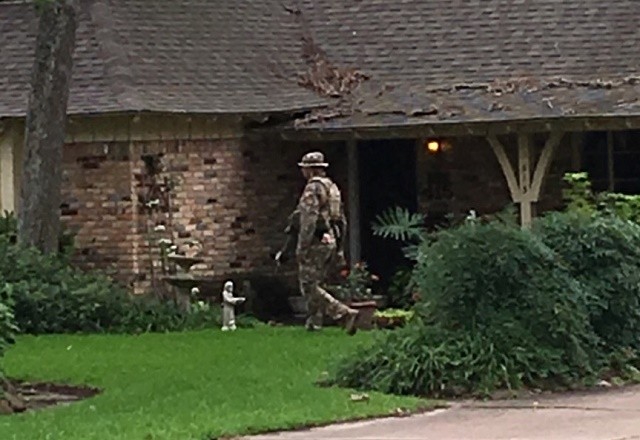 KHOU reported about a brave Boy Scout who likely saved the life of one of the shooting victims. 17-year-old Nick Latiolais was riding with his mother to a doctor’s appointment when they came upon the scene. He say a man lying on the road. “He was in a lot of pain,” he told the reporter. “He was screaming a lot.”

“He was just saying, ‘Help me! Help me!’ and he was grabbing his leg and I saw some blood around one of his legs.” he continued. He said he never heard any of the gunshots as he was focused on using his Boy Scout first aid training. He made a tourniquet from the victims vest and applied pressure to try and stop the bleeding.

“I just made sure I told him you know, ‘you’re doing great. Help is on the way. It looks like you’re going to be all right,’” he said.

He described the victim as a young man in his twenties who had recently moved to the U.S. form South America. He said his six years of Boy Scout training prepared him for this.

In addition to shooting at patrol cars and other people and buildings in the area, Garza managed to shoot the Houston Police Department’s helicopter five times. The helicopter was overhead providing aerial assistance to officers on the ground, the Houston Chronicle reported.

A stray bullet struck a gas pump at a nearby Conoco gas station. The station caught fire and was damaged extensively.

Following Garza’s death, SWAT team members searched house to house on Gibbs’ street, he said. “Officers told me they thought there might be additional shooters. They checked the backyards of every house on our street and made sure they were clear,” he said.

In an odd development, KTRK ABC13 reported found a bag belonging to Garza that was left behind by police after their investigation. The bag contained ammunition and some documents. One of the documents was Garza’s birth certificate.

Police were called back to the scene and recovered the military-style backpack. No explanation was given as to why the bag, which was out in plain sight, was left behind.

This shooting lasted for about 45 minutes before Garza was finally stopped by police.