HOUSTON, Texas — Jorge Ramos told a crowd of nearly 1,000 illegal aliens, DREAMERs and their supporters “I think you the DREAMers are the Rosa Parks of this time.” The crowd was gathered to show support for President Obama’s executive amnesty programs — Deferred Action for Childhood Arrivals (DACA) and Deferred Action for Parents of Americans (DAPA). Following the speeches, the group marched to the Harris County jail to protest the department’s participation in the federal immigration program, 287(g).

Jorge Ramos, immigrant and journalist for Fusion’s America and Univision was there it was said to “inspire” illegal aliens and to tell them to “release fear.”

As reported by Breitbart News, Ramos has drawn attention to himself these past months for his fiery confrontations with Republican presidential candidate Donald Trump. Open borders Ramos has whined about Trump’s policies claiming that deporting eleven million illegal aliens would cost the U.S. $137 billion. 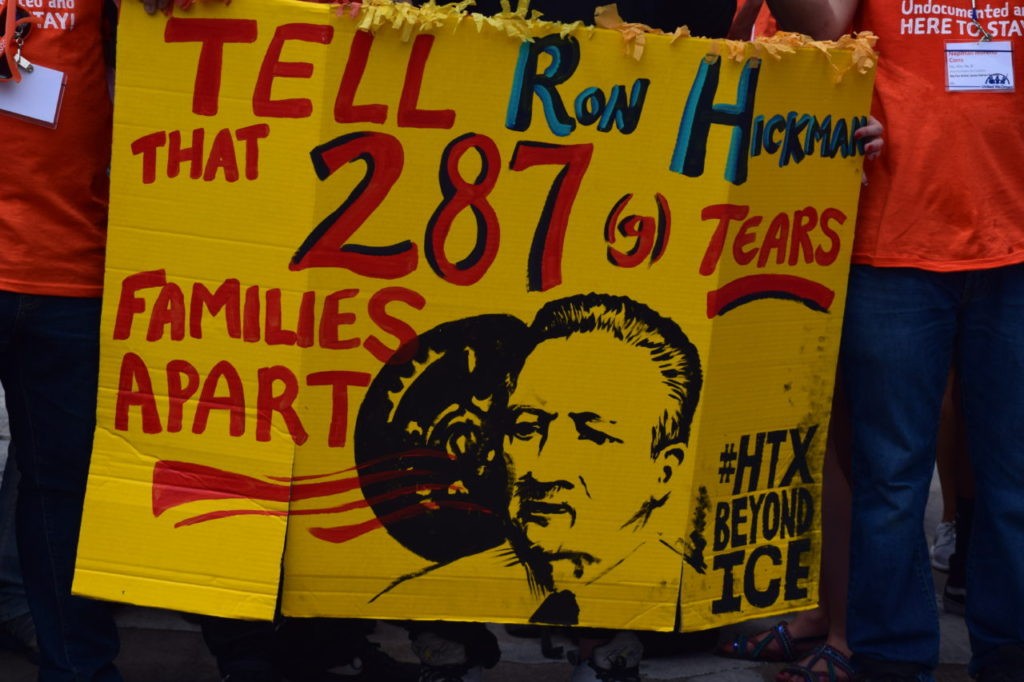 Breitbart Texas was in the middle of the fray when protesters shouted”Here to Stay,” and “End 287(g).” They also denounced the phrase “criminal aliens.”

A sea of protesters dressed in orange called for an end to 287(g). Black Lives Matter representatives called the policy “discriminatory.”

They also yelled “Black, Brown, Immigrant Power!” and “No Justice, No Peace!”

The 287(g) program is designed to help keep communities safe by identifying illegal aliens in the jail and having ICE officials detain them when they are released from the jail.

Deputies from the Harris County Sheriff’s Department stood in front of non-violent protesters. Mounted patrol deputies were also on scene to help keep the peace.

One of the speakers told the gathered crowd, “They have riot police standing in front of peaceful protesters.” The reality was that the police were not in riot gear but were wearing helmets for their safety in case something was thrown. The crowd maintained a peaceful presence during the protest. 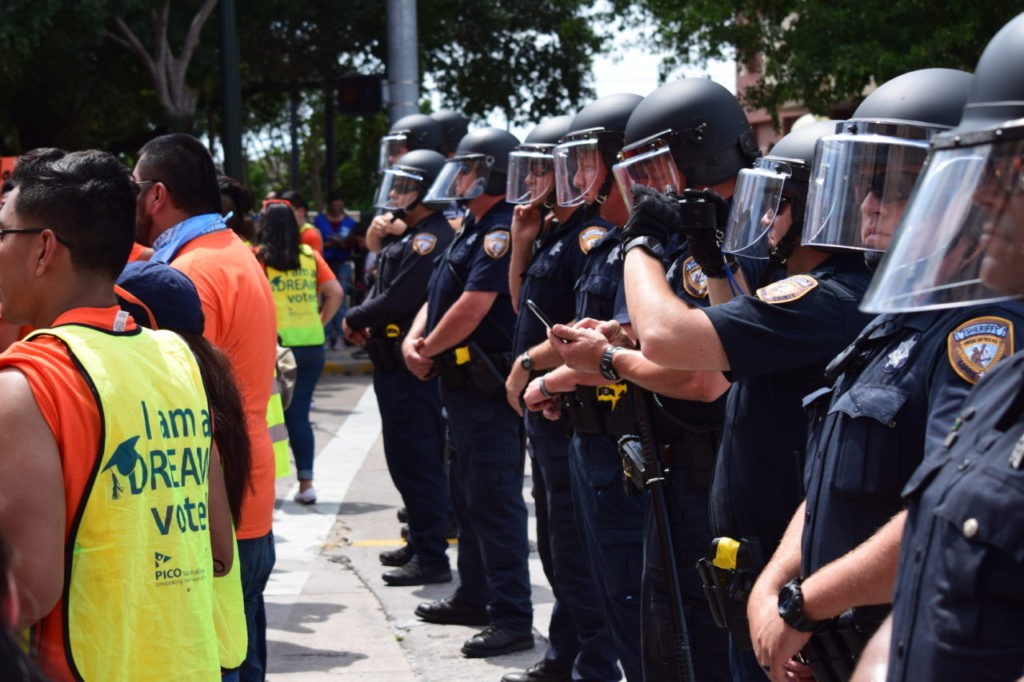 Deputies form a line to keep the roadway to the jail open for emergency vehicles. (Breitbart Texas Photo by Bob Price) 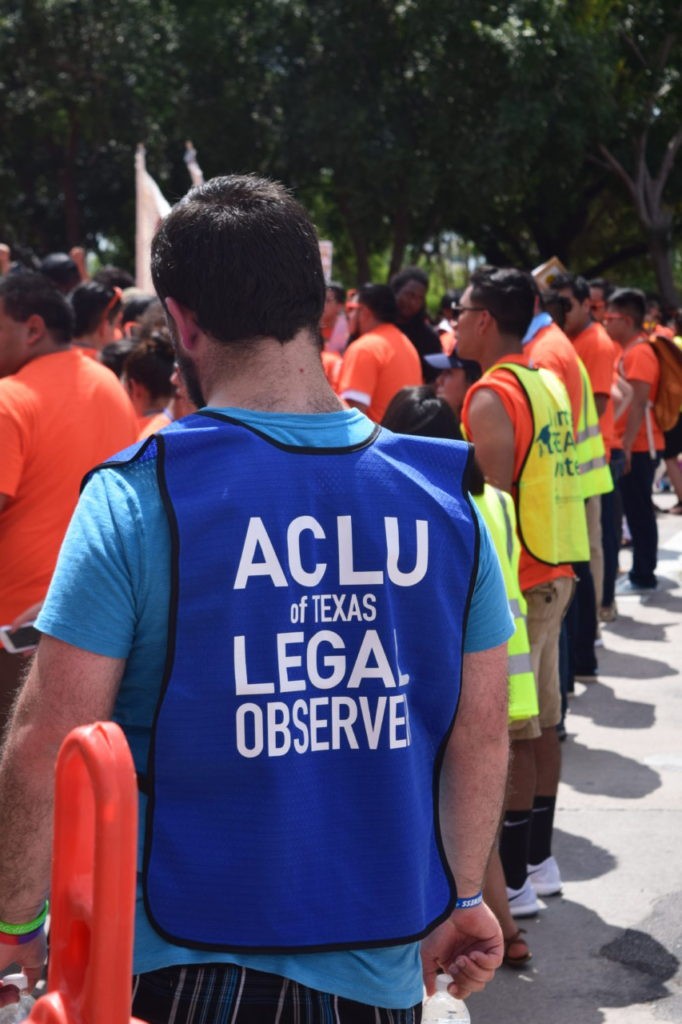 People are trying to instill fear in the community. Harris County Sheriff Ron Hickman told Breitbart Texas, “There are a lot of misperceptions and disinformation about this program.” The Sheriff said the program only applies to criminals who have  been arrested and are being detained in the jail. “There is a lot of fear mongering,” he said.

One of the speakers at the rally told the crowd that his father was sent to an immigration detention center after being caught driving his car while intoxicated. Another speaker adamantly proclaimed that no criminal should be deported. “They are attaching the word ‘criminal’ to ‘alien’ to try and divide us. The people behind these bars are still our people,” she said of those imprisoned in the Harris County jail. 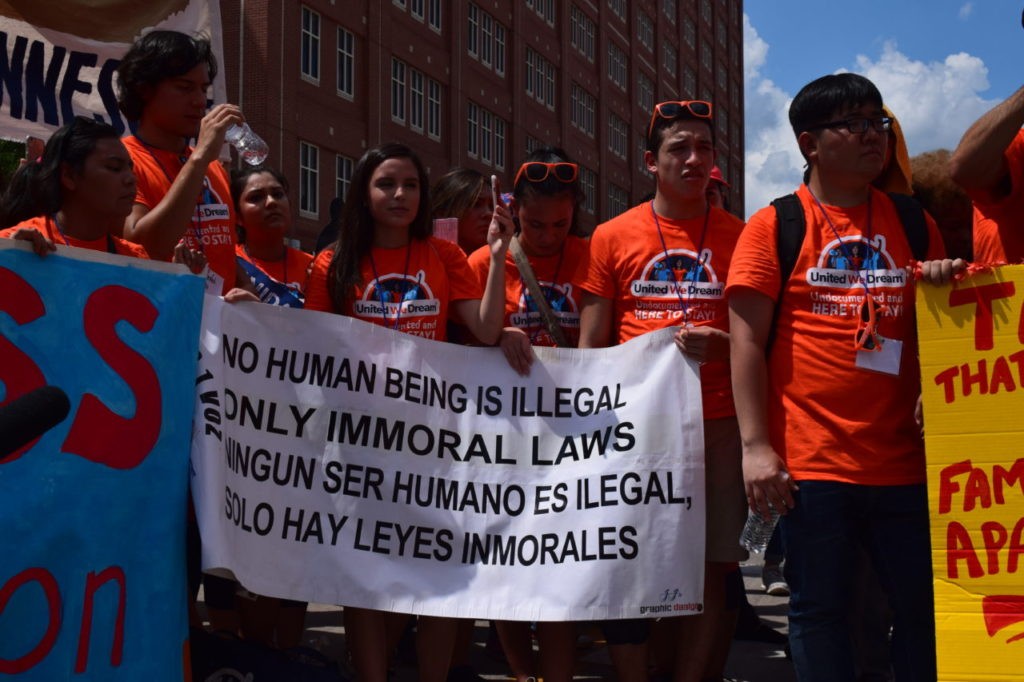 A statement obtained from the Harris County Sheriff’s Office (HCSO) by Breitbart Texas said the department is sensitive to the concerns of the community about the 287(g) program and the HCSO’s partnership with Immigration and Customs Enforcement (ICE).  “The controversy surrounding the program has a legitimate history reflected in public outcry and concern.” Hickman said this is why he has worked with the local ICE Enforcement and Removal Operations Office to “rigorously evaluat[e] to assuage the concerns of community groups.” 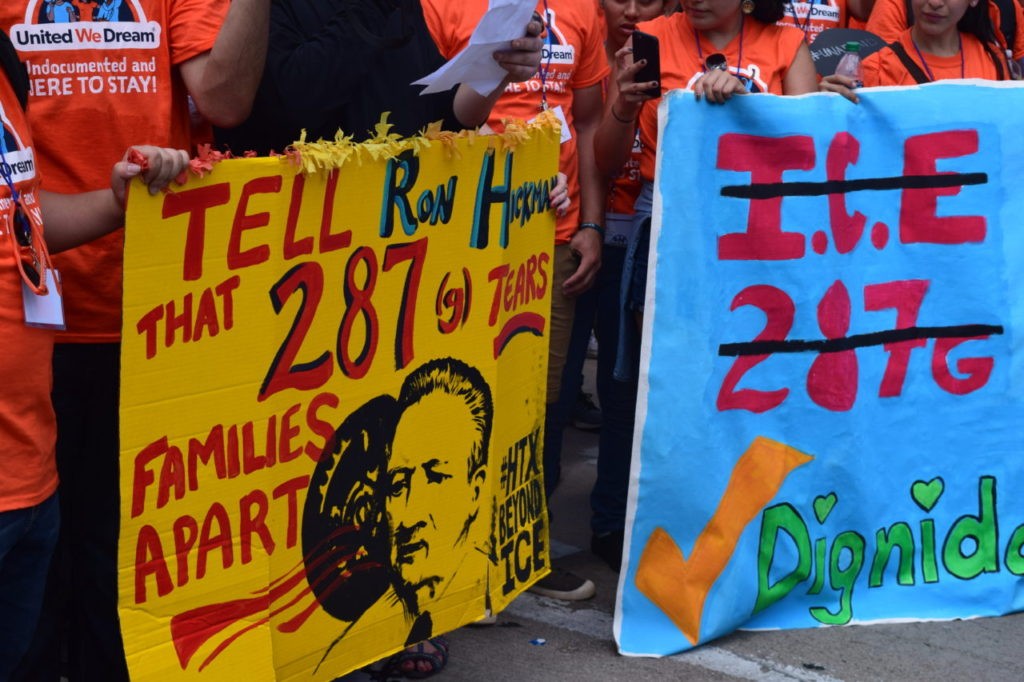 “Harris County officials at every level have repeatedly set the record straight regarding the realities of the program.” The Department added, “We are working hard with County, State and Federal officials, to clear up misperceptions and confusion surrounding the use of the 287(g) program.” Officials want to make clear that “the system only operates ‘inside’ the jail itself and people in the community have nothing to fear from normal contacts with law enforcement. Only inmates with select priority crimes are referred to ICE,” they said.

To support this statement, the HCSO represented that:

While the 287(g) program was initiated by a Republican sheriff, the program was actually expanded under the administration of Democrat Sheriff Adrian Garcia.

According to the HCSO, “Gone are the days where habeas corpus concerns arise from the controversial ‘detainer’ program.” In years past, the Harris County Sheriff’s Office would honor an ICE request for detention by holding inmates for up to 48 hours after their scheduled release from local custody. We have disbanded that practice. ICE now operates a daily transportation system from the Harris County Jail, 24 hours a day, 7 days a week, including holidays. If ICE has interest in the detention of a priority individual the onus is on that agency to take custody of the detainee. If ICE fails to retrieve inmates with detention notifications, the Harris County Sheriff’s Office will process the release of the inmate as scheduled.”

A spokesman for the Sheriff’s Department said that past concerns also addressed the application of detainers on pre-trial detainees. He said the process now occurs after adjudication allowing pre-trial detainees the opportunity to make bond regardless of their immigration status. He added that this was an important step to applying equal and fair treatment to all detainees of the Harris County Sheriff’s Office.

The HCSO press release stated, “It is true that we continue to work with ICE. Ultimately this is a program designed to protect the public from the most violent of offenders with histories of immigration violations.” As examples, the HCSO cited Victor Reyes, who last year went on a killing spree throughout Houston and Harris County, wounding two and killing two. The previously deported illegal alien ultimately engaged a Sheriff’s Deputy in a gun battle where Reyes was shot and killed. As reported by Breitbart Texas, Reyes had a lengthy criminal history, and had previously been deported on multiple occasions.

“To date we continue to cooperate with ICE to evaluate our partnership to be responsive to community concerns. We continue to examine ways in which we can continue to answer the calls from the community, and keep the public safe through federal partnerships.”

Breitbart Texas reported in mid-April that Sheriff Hickman met with anti-deportation activists and stood strongly in support of his jail programs that cooperate with immigration officials to deport criminal illegal aliens. Hickman met with representatives of United We Dream, an organization that seeks to stop all deportations, and with local immigration attorneys and other community members.