The Dallas SWAT team has deployed to the downtown police headquarters after what is being called a “credible threat” was received.

Live coverage from Breitbart News of the threat against the police headquarters in Dallas, Texas. All times CDT.

Great job by our officers!

UPDATE 7:48 p.m.: Dallas PD tweets that out of an abundance of caution, their officers searched the garage to ensure reports of a suspicious person and this report was “thoroughly investigated.” One minute earlier, Dallas PD had tweeted, “Search has concluded.”

UPDATE 7:28 p.m.: Lynnanne Nguyen Fox 4 reporter tweeted that SWAT appears to be moving out after no suspect was found in the Dallas PD headquarters parking garage.

SWAT appears to be moving out after no suspect found in parking garage at DPD HQ. @FOX4 pic.twitter.com/PoiTO9uYPz

UPDATE 7:19 p.m.: Fox 4 News, @shaunrabbfox4 reporting that the suspicious vehicle at the Dallas PD police garage was unregistered in database because it was an undercover vehicle. – Local news outlets are now returning to normal programming.

.@shaunrabbfox4 says suspicious vehicle at Dallas PD garage area was unregistered in database because it was undercover vehicle.

UPDATE 7:17 p.m.: Fox 4 News reporting that vehicle was an employee’s. All understandable given the heightened alert of these officers and the bomb materials found in the dead suspect’s home. Probably a false alarm.

As a precautionary measure, K9 is conducting a secondary search.

UPDATE 7:06 p.m.: WFAA’s Lopez is reporting that a K-9 team will now search the facility. Her source told her the “suspect escaped” from the garage.

UPDATE 7:06 p.m.: DPD tweeted the garage has been cleared. No suspect found.

Officers have completed manual search of the garage. No suspect found.

UPDATE 6:59 p.m.: WFAA’s Rebecca Lopez said officers told her the man in the garage was dressed in “all black.”

UPDATE 6:52 p.m.: WFAA is reporting police had earlier made verbal contact with someone in the garage. The person retreated and disappeared.

UPDATE 6:52 p.m.: DPD asking reporters to get back from the scene.

Officers are ordering reporter to move back because they are making it very difficult for them to do their jobs.

UPDATE 6:49 p.m.: Reporter reminding folks that there was an attack on June 13, 2015. James Boulware shot at the Dallas PD headquarters from an armored van. Breitbart Texas covered that event.

UPDATE 6:48 p.m.: Fox 4 reporter has great sources from inside Dallas PD and has a police officer in his family. Two females that work for Dallas PD saw someone in the parking lot, which should be secure from others, and the man had some sort of mask, maybe even a gas mask on his face.

UPDATE 6:46 p.m.: DPD preparing to blow another lock. Officers are conducting a systematic search of the parking garage.

Officers are planning to breach a lock door in the garage with a shotgun.

UPDATE 6:45 p.m.: DPD reports they are not on lockdown. Earlier reports from local news outlets were not correct.

Reports of HQ being on lockdown is incorrect.

UPDATE 6:40 p.m.: There have been no shots fired, reports CBSDFW. SWAT blew up a lock to enter a secured area.

UPDATE 6:37 p.m.:  Fox 4 News reporting that someone put something under a vehicle. It could take some time to sweep the tall building.

UPDATE 6:35 p.m.: CBSDFW Jason Garrett reports what appears to be a large group of people on the other side of the police HQ who appear to have been taken out of the building. Also, the man who was praying, yelling, and singing in the front has now ended his vigil.

UPDATE 6:33 p.m.: CBSDFW’s Lopez is now reporting that someone is verified to be in the garage who is not supposed to be there. “This is the real deal,” her sources told her.

Dallas PD asking our crews to move back after @allisonfox4news says they’ve told her shots have been fired @FOX4 pic.twitter.com/BQZlKWlI08

UPDATE 6:26 p.m.: CBSDFW’s Lopez said police sources are telling her they are taking this threat “very seriously” and that she needs to get back away from the area. She said a man was seen on the roof of the garage that is only open to police personnel.

UPDATE 6:24 p.m.: CBSDFW reports that civilians are still out in front of the police headquarters. One man is on his knees shouting loudly at the memorial where he had been seen praying earlier. 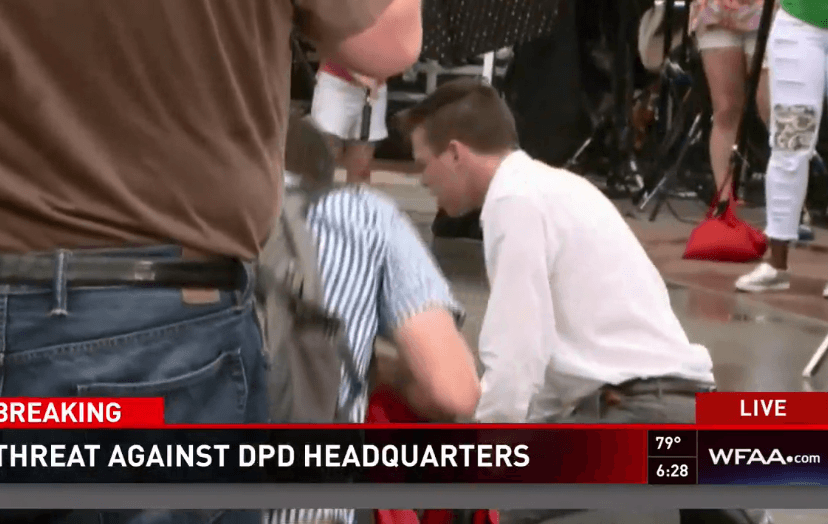 UPDATE 6:17  p.m.: Fox News is reporting multiple officers with guns drawn. The officers are “training the guns” on the parking garage. 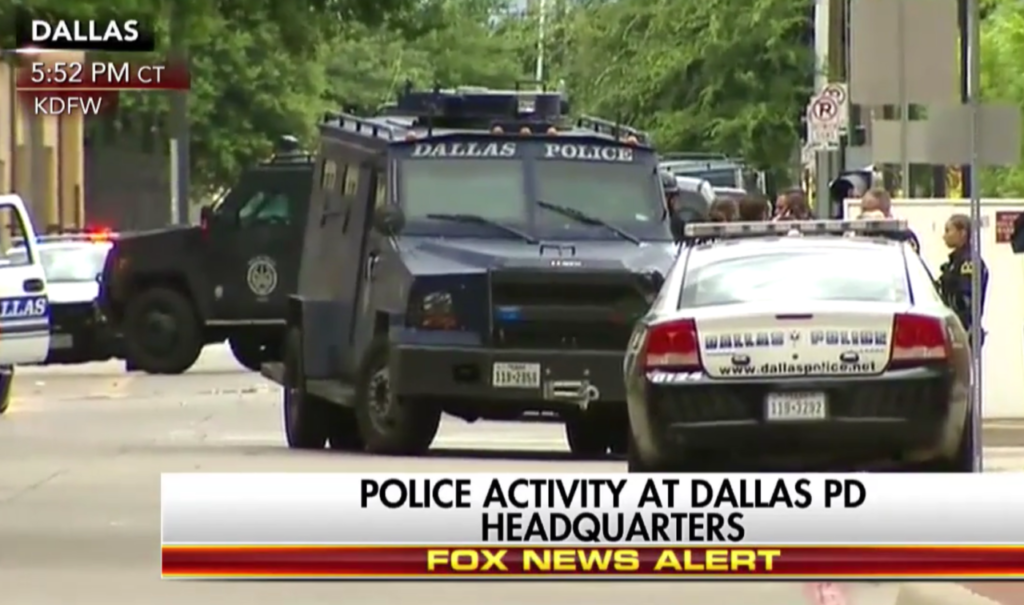 UPDATE 6:12 p.m.: CBSDFW is reporting that at least one person from the Houston group has been seen in the Dallas area.

UPDATE 6:10 p.m.: WFAA is reporting that the Dallas PD has initiated a “city-wide” roll call to verify the safety of every police officer in the city.

UPDATE 6:05 p.m.: WFAA reporter Rebecca Lopez said police told her they were looking for one man in the DPD parking garage. She was told to get back immediately. Many heavily armed SWAT officers were seen around the building with their rifles in a ready position.

WFAA is reporting that the Dallas police headquarters building is in lockdown and a SWAT team has been deployed after a threat was received. In a prepared statement Saturday evening, the Dallas PD said, “The Dallas Police Department received an anonymous threat against law enforcement across the city and has taken precautionary measures to heightened security.”

Dallas police are saying they received a credible threat that a group from Houston is claiming to be armed and headed to Dallas with the intent to kill more police officers, according to KTRK ABC13 in Houston.

WFAA has reporters on the scene who are saying multiple SWAT vehicles and personnel are on the scene.

Reporters from Dallas said officers told them shots had been fired and an ambulance was seen on-site.