McALLEN, Texas — A local ballot measure supported by Hillary Clinton donors hopes to levy a new tax on one of the poorest regions in the country in the spirit of improved public health.

This week, the Hidalgo County Commissioners Court moved to have a proposition included on the November General Election ballot. If passed, the new taxing entity would collect property taxes to reimburse a local hospital for money spent treating the indigent population.  The measure had been defeated two years before, however local and state Democrats have pushed the ballot measure once again.

In a recent interview, County Judge Ramon Garcia appeared to be defending the hospital district by claiming the monies would go to help cover the cost of indigent healthcare and to help fund an upcoming medical school. The term indigent healthcare is used to refer to individuals that are not able to pay for medical care in the county.

According to the Mayor of Mission, Beto Salinas, Garcia is not explaining is the fact that the majority of the individuals who qualify as indigent health care recipients include people living in Mexico and illegal immigrants — leaving few viable options to collect on the money spent.

“Hospitals know that, our County knows that; that is why we already have an indigent healthcare program in place,” Salinas said. “This is a form of getting the county taxpayers to pay for everything, for every bill they have in the hospitals … The county tax base can not afford that.”

Salinas, along with a small group of concerned homeowners, have taken to the streets in an effort to inform the public about the new measure.

“We have a 20 to 30 percent delinquent tax and they want to add another taxing entity,” Salinas said. “No one will be able to pay their taxes. This is not a bond issue that you can pay off and forget about it — this is forever.”

In 2014, county Democrats had pushed a similar measure but lost that year. According to Salinas, the timing of the new proposition is an attempt to capitalize on the fiercely-contested presidential election in an effort to have the lesser-informed overcome the number of concerned property owners.

“They are going to lose again,” Salinas said. “People are tired of them administrating the County in the worst way they can. They are not taking care of the people that pay taxes in this county.”

According to Ramon Garcia, Salinas has been misguiding voters in order to have the hospital district measure defeated.

For Norma Saldaña, fighting the healthcare district is a matter of ensuring her family’s future. The south Texas rancher is married to a disabled veteran and would therefore not affected by a rise in property taxes, but she claims to be fighting on behalf of her children.

“They keep raising the taxes and I know it doesn’t affect me, but what about my children?” Saldaña said. “How are they going to be able to pay the taxes on our property if every year they keep going up and now they want to bring this new taxing entity?”

The various groups pushing for the creation of the taxing district purport to link back to local businessman, Alonzo Cantu, and his Doctor’s Hospital at Renaissance.

In 2009, the New York Times reported how Alonzo Cantu’s hospital and network had been behind the funding of various politicians friendly to their ideals. Cantu, a local construction magnate has a long history of funding politicians at the local, state and federal level.

In march 2009, the Democratic Senatorial Campaign Committee was able to raise $500,000 in one event from individuals tied to Doctor’s Hospital at Renaissance, the NYT reported. Another event hosted at Cantu’s house in 2007 raised more than $800,000, the paper reported.

Cantu’s proficiency at bundling campaign donations from his business associates have bought him long-term relationships with the Clintons and other national Democrat power players, the Washington Post reported. In 2007, Cantu and his donor network were key backers of Hillary Clinton’s failed bid for the White House at the time.

As Breitbart Texas reported in August 2015, Hillary Clinton traveled to McAllen for a fundraising event at Cantu’s house. During the event, attendees paid $2,700 per person and $5,400 per couple to get in the door. The posh dinner was held in a city where the household median income is $40,636, or about $12,400 less than the rest of the nation. In south Texas, more than 27 percent of the households make less than $20,000.

Democrat politicians pushing for the creation of a hospital compensation district are the same that have been receiving campaign donations from the Border Health PAC that lists Cantu on its board of directors.

Senator Hinojosa reportedly took the most from the group pushing for the taxing entity, having received $675,000 to date, according to the Texas Ethics Commission.

In a similar fashion, Rep. Bobby Guerra has also received various donations from the group to the tune of $50,000 since 2011.

One of the individuals that has publicly claimed to be neutral on the district proposal is Hidalgo County Judge Ramon Garcia. In a recent radio interview about the issue, Garcia said he would simply do what the residents of the county wanted.

In a similar fashion, Ramon Garcia has also been on the receiving end of various donations from Cantu’s PAC. The varying amounts received by Garcia are reported to be more than $130,000. 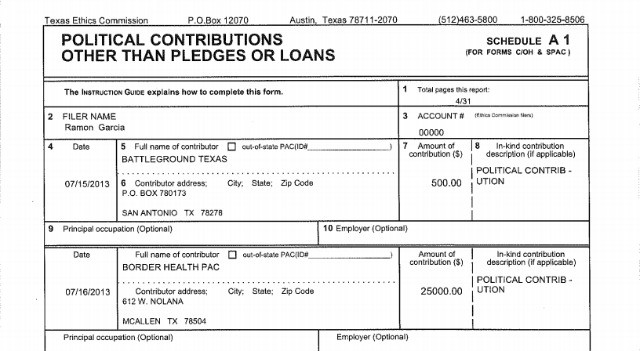