LAREDO, Texas — Presumptive Congressman Jodey Arrington honored his word to tour the U.S.-Mexico border with Breitbart Texas after his runoff with then-Lubbock Mayor Glen Robertson. The two were competing for Texas’ 19th District seat in the U.S. House of Representatives currently held by Randy Neugebauer. True to his word, Arrington traveled to Laredo, Texas, and experienced first-hand what Border Patrol agents are up against.

Arrington arrived in Laredo and immediately went with me for the late night tour of low-income neighborhoods that line the U.S.-Mexico border in this city. The neighborhoods sit immediately across the narrow and shallow Rio Grande from rough, crime ridden neighborhoods in the Mexican city of Nuevo Laredo — a city that serves as the de facto headquarters of Mexico’s Los Zetas cartel.

Regardless of the dangers, Arrington toured the hottest spots that Los Zetas use to smuggle both human beings and narcotics into Texas — and he stayed out with us until 3:30 A.M. The tour was no doubt eye opening, as Arrington was taken through the border neighborhoods where very few Border Patrol agents were present and not one single Laredo cop nearby. 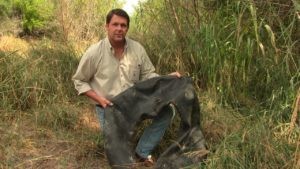 During the runoff campaign, I had taken the large number of major endorsements that Arrington received to mean that he would be more “establishment” and less likely to actually tour the border and experience what Border Patrol agents deal with. I had seen him as the “Bush” pick, largely due to Arrington’s history of working in the G.W. Bush Administration. Arrington gave me his word during the campaign that he would, whether elected or not, come with me to the border and feel and experience what I felt he needed to know. Truthfully, I did not believe him. My years in politics and media have left me with a profound distaste for the vast majority of politicians and media professionals — a perspective that I routinely share as loudly as possible.

Arrington won his runoff election by a large margin and one of the first things he did was to contact me to set up a border trip. I still didn’t believe that he would follow through. I was completely wrong about this — and about him. He honored his word to me and to the Border Patrol agents to whom I work so hard to bring a voice. Arrington pushed to schedule the trip. He showed up. He put himself in dangerous situations on the border. He experienced and felt what it is like to be out there on the line into the wee hours of the night and morning. He saw the “low-crime rate” Laredo where the police department simply has no police in the bad areas, likely to keep their numbers down and their “official” crimes suppressed for commerce. Arrington felt the unease of being in the brush in areas between the Los Zetas stronghold and Texas.

Instead of the politician who was willing to do and say anything to get elected, I found Arrington to be a man of great character who honors his word and takes being elected by his fellow West Texans to heart. I found a man who loves God, but did not use that relationship to win votes — a man who will tell you what God has done in his life, but only if you ask. I found a man genuinely concerned with what Border Patrol agents need to best secure our border.

Hours of conversation on the border with Arrington left me feeling confident that Border Patrol agents will have a new fighter in their corner as they endure the onslaught of politically-motivated attacks from many Democratic Party politicians and left-leaning journalists carrying out their orders from even further left editors. As with any elected official, we are bound to have differences of opinion over time. I feel confident, however, that Arrington is sincere and will do what he believes is in the best interests of West Texans and Border Patrol agents — whether the spotlight is on him or not.