Texas Governor Greg Abbott paused to honor Texas’ first responders who were killed in the line of duty or who put themselves at great risk to protect and serve the public.

“Today, Texas honors the extraordinary few – those who have demonstrated the character and the courage to repeatedly put their lives on the line to serve and protect their communities,” Governor Abbott said on the floor of the Texas Senate on Monday. “Today we recognize acts of uncommon valor – by first responders, firefighters and law enforcement officers – willing to put everything on the line to keep us safe. All of the men and women who protect and serve, and the families who stand by their sides, deserve our deepest respect. They represent the very best of Texas.

The Texas Legislature created the awards during the 2003 session to honor the men and women who have been seriously injured or killed in the line of duty. The 2016 Honorees included 20 law enforcement officers who were killed in the line of duty. These included Harris County Deputy Sheriff Darren Goforth, who was executed by a lone gunman just over one year ago. It also included the five Dallas-area officers who were shot and killed by another shooter. Both of these incidents had connections to the climate of anger towards police coming from the Black Lives Matter movement.

Governor Abbott’s office released a video honoring those who were severely injured or killed in the line of duty in the past year:

Harris County Sheriff Ron Hickman was on-hand to receive the awards for those under his command. “I was honored to represent The Harris County Sheriff’s Office as Governor Greg Abbott gave out awards to three members of the HCSO family,” Hickman told Breitbart Texas. “Detective Tommy Keen, Deputy Trey Valdez, and deputy Darren Goforth were awarded the Star of Texas Awards posthumously for their service to the residents of the State of Texas.”

“Detective Keen was killed while helping to remove fallen trees from a roadway during a storm during Hurricane Ike, just a month short of his retirement date,” Hickman continued. “Detective Keen had served the Harris County Sheriff for 35 years and was a well-known Robbery Detective.” 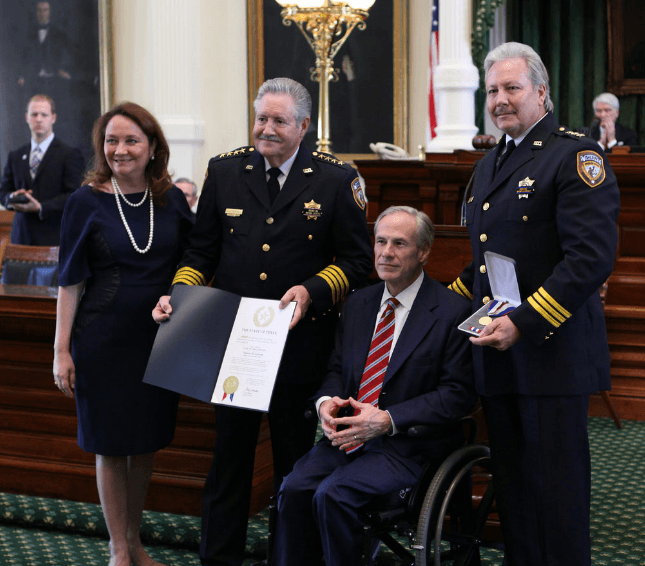 (Photo: Office of the Texas Governor)

“Deputy Jesse ‘Trey’ Valdez III was an 11-year veteran and was killed by a drunk driver while responding to a call,” the sheriff recalled. “Deputy Darren Goforth, a 10-year veteran was murdered, execution style, on August 28th 2015 in a highly publicized incident that rocked the Harris County area a year ago.”

Hickman said the mood in the chamber of the Texas Senate was solemn as Governor Abbott handed out the awards to each of the family members or agency representatives who were present.

A poignant reminder of the dangers of the jobs performed by these heroes was illustrated as some of the injured used canes or walked with the aid of a prosthesis to compensate for their injuries.

State Representative Dustin Burrows (R-Lubbock) said that “at a time when people would target law enforcement officers simply for wearing a uniform or a badge, it says a lot about where Texans stand in supporting first responders.” The Texas Panhandle Rep. said it was an honor for him to stand with those being recognized for their heroism. “As I have said on many occasions,” he concluded, “I fully support law enforcement and the sacrifices they make on our behalf.”

The 2016 recipients of the Star of Texas Awards are:

Peace Officers Killed in the Line of Duty

Fire Fighters Seriously Injured in the Line of Duty

Peace Officers Seriously Injured in the Line of Duty

Editor’s Note: This article was updated with additional information.