Agents assigned to the Rio Grande Valley Sector observed the driver of a pickup truck driving through a golf course near the riverbank that separates the U.S. from Mexico. The truck appeared to be loaded with bundles of marijuana, according to information provided to Breitbart Texas by Supervisory Border Patrol Agent Marlene Castro.

After seeing the agents closing in, the driver turned around and drove the truck into the river in what is known as a “splashdown” technique, Castro stated.

Drug dealers use this method to accomplish two things. First, the driver and any accomplices hope to evade apprehension by getting back into the river and swimming to Mexico. Second, the cartel-connected smugglers will often time stand by, either in the river, or on the opposite bank, with rafts, boats, or other means of attempting to get to the river-bound vehicle and try to recover the drugs before Border Patrol agents can seize them, Breitbart Texas reported in June 2015. 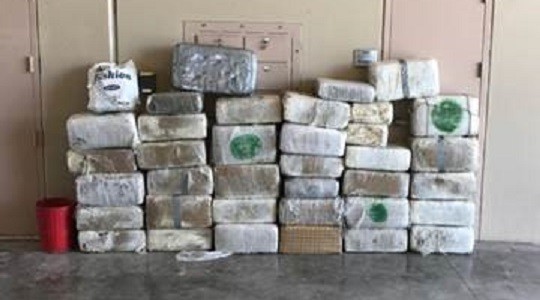 In this case, the agents were able to recover the drugs without interference. Agents found 37 bundles of what they tested to be marijuana. The bundles weighed more than 800 pounds. Castro said the estimated street value of the drugs is approximately $641,320.

The driver and his passenger swam successfully to the other side and escaped apprehension.

Castro said the occurrences of these dangerous “splashdown” maneuvers is increasing in the Rio Grande Valley as smugglers become desperate to avoid a higher certainty of prosecution. There have been 14 such incidents in the RGV Sector since the beginning of this fiscal year. Ten of those incidents occurred near the Rio Grande City Station.

This area is the most volatile area in the sector, Castro stated. That station has the highest number of drug seizures this fiscal year.