HOUSTON, TX — Parts of Texas may become inhabitable for weeks or months according to a Friday morning statement from the National Weather Service.

Hurricane-force winds and torrential rains expected to last for five days or more could cause parts of the Lone Star State to become unhabitable due to structure damage, lack of utilities and safe drinking water, and major flooding conditions, the National Weather Service wrote in an advisory late on Friday morning. Hurricane Harvey is expected to cross the Texas shoreline late Friday evening or early Saturday morning–a major and potentially catastrophic Category 3 storm. 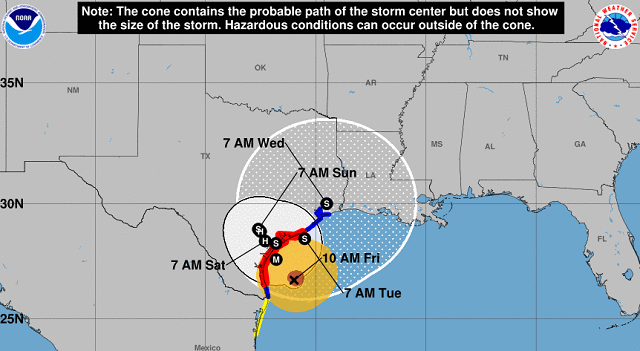 As of the 10 a.m. CDT statement from the National Hurricane Center, Hurricane Harvey is still a Category 2 storm with maximum sustained winds of 110 mph. At 111 mph, Harvey will become a Category 3 storm, considered to be a “major hurricane.” It will be the first major hurricane to hit the Texas coast in 12 years.

The storm is located about 110 miles SSE of Corpus Christi, Texas, and is moving at 10 mph to the northwest. The central pressure of the storm has fallen to 27.97 inches, an indication the storm is likely to intensify.

People living on or near the coastline should be aware of the potential for storm surges that could produce catastrophic damage to homes, roadways, and other structures. The National Hurricane Center posted the following warnings:

Rainfall predictions for Hurricane Harvey increased in the most current advisory. The hurricane center predicts widespread rainfall accumulations of 15 to 25 inches and accumulations of 35 inches or more over the middle and upper Texas coast through Wednesday of next week. Areas of Texas, south of Corpus Christi, could also experience heavy rainfall of between 5 and 15 inches.

“Rainfall of this magnitude will cause catastrophic and life-threatening flooding,” weather officials advised.

The storm is expected to resume its movement and return to the coastline near Port Lavaca, re-entering the Gulf of Mexico briefly before setting its sights on the Houston metropolitan area on Wednesday.

Hurricane or tropical storm-force winds impacting areas next week where trees have been exposed to several days of soaking rain could cause the trees to fall, taking out power lines leaving potentially millions of people without electricity for an extended period of time.

“Again, the primary emphasis and greatest threat to life and property will be the extreme rainfall amounts that will likely lead to a potentially catastrophic and prolonged flash flooding event,” National Weather Service officials concluded.