Nearly 300 MS-13 gang members are behind bars following the conclusion of a joint international law enforcement effort led by U.S. Immigration and Customs Enforcement (ICE). “Operation Raging Bull” resulted in the arrests of 214 MS-13 members and affiliates in the U.S. and 53 in El Salvador.

“MS-13 has long been a priority for ICE. However we are now combating the gang with renewed focus and an unprecedented level of cooperation among DHS’s components and our domestic and international partners,” ICE Deputy Director and Senior Official Performing the Duties of the Director Thomas Homan said in a statement obtained by Breitbart Texas. “ICE has the ability to pursue complex criminal cases using our statutory authorities and to prevent crime by using our administrative arrest authorities to remove gang members from the country. We will not rest until every member, associate, and leader of MS-13 has been held accountable for their crimes, and those in this country illegally have been removed.”

Phase one of the operation followed up on the results of an 18-month investigation in El Salvador. The probe led to the arrests of 53 MS-13 gang members and affiliates in El Salvador. In early October, the second phase began in the States. Running from October 8 to November 11, law enforcement officers and agents from federal, state, and local agencies arrested 214 gang members and affiliates across the U.S.

“With more than 10,000 members across 40 states, MS-13 is one of the most dangerous criminal organizations in the United States today,” Sessions said in a statement on Thursday. “President Trump has ordered the Department of Justice to reduce crime and take down transnational criminal organizations, and we will be relentless in our pursuit of these objectives.”

“So far this year, we have secured convictions against more than 1,200 gang members and worked with our partners in Central America to arrest and charge some 4,000 MS-13 members,” the AG explained. “These 267 arrests are the next step toward making this country safer by taking MS-13 off of our streets for good.”

Ninety-three of the 214 arrests made in the U.S. were based on federal and/or state criminal charges, officials stated. Those charges include: murder, aggravated robbery, racketeering influenced corrupt organization (RICO) offenses, violent crime in aid of racketeering (VICAR) offenses, narcotics trafficking, narcotics possession, firearms offenses, domestic violence, assault, forgery, driving under the influence, and illegal entry/reentry. Immigration violations made up the remaining 121 arrests. 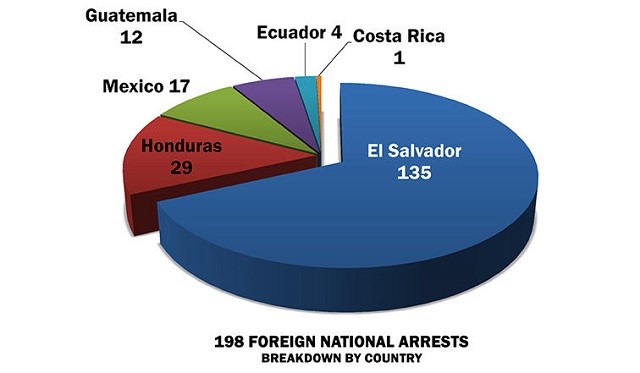 Only 16 of those arrested were U.S. citizens, the report states. Illegal aliens made up the overwhelming majority of those arrested. Officials arrested a total of 198 immigrants — 193 of which had no legal status. The MS-13 gang members came from El Salvador (135), Honduras (29), Mexico (17), Guatemala (12), Ecuador (4) and Costa Rica (1).

Of those arrested after entering the U.S. illegally, ICE officials reported that 64 came to the U.S. as Unaccompanied Alien Children — most of those are now adults. 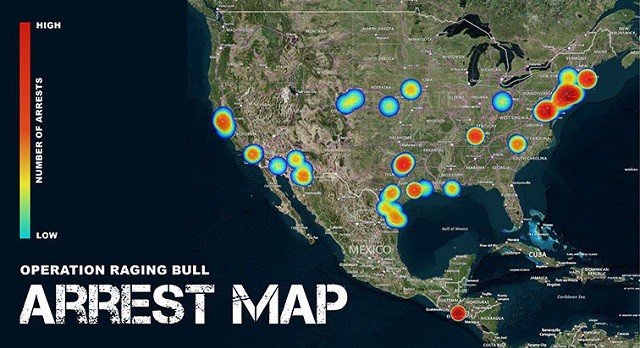 ICE officials provided examples of the types of crimes carried out by these MS-13 gang members:

ICE officials added six MS-13 gang members to their most wanted list, including one wanted in Montgomery County, Texas, on murder charges. The other five fugitives are suspected of murdering Salvadoran police officers. 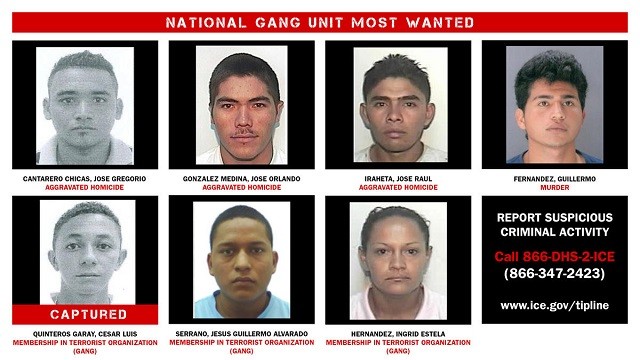 Individuals are confirmed as gang members if they admit membership in a gang; have been convicted of violating Title 18 USC 521 or any other federal or state law criminalizing or imposing civil consequences for gang-related activity; or if they meet certain other criteria such as having tattoos identifying a specific gang or being identified as a gang member by a reliable source.