Border Patrol agents arrested 38,234 illegal immigrants who crossed the border between ports of entry in April. This is up from 37,383 in March, according to U.S. Customs and Border Protection’s Southwest Border Migration Report issued on Thursday. While this represents an increase of just under three percent from March, it is a 43 percent increase over April 2017. 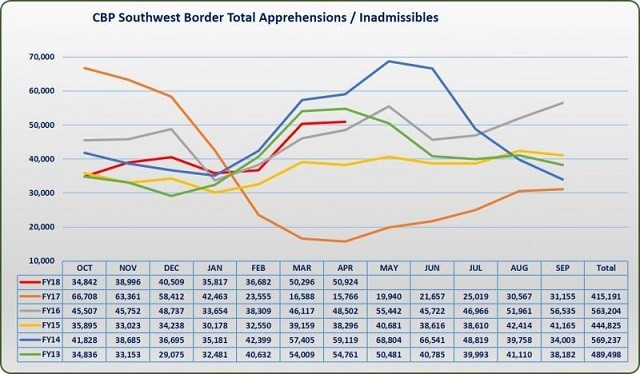 The largest number of UAC entering the U.S. illegally came from Guatemala (12,459). Mexico sent 6,151 minors to the U.S. Border while Honduras and El Salvador followed with 4,624 and 2,090 respectively. The largest number of FMUAs apprehended came from also came from Guatemala (25,163). Honduras and El Salvador followed closely with 16,814 and 5,974 respectively. Mexico trailed with only 1,275.

CBP officials define FMUA as “the number of individuals (either a child under 18 years old, parent or legal guardian) apprehended with a family member by the U.S. Border Patrol.”